What started a few months ago with the season’s first UCI races and the World Cup opener in Las Vegas is coming to an end with the 2016 UCI Cyclocross World Championships in Heusden-Zolder, Belgium this weekend.

Yesterday we looked at Saturday’s World Championship races, the Junior Men, U23 Women and the Elite Women’s events. We’re hopeful that yesterday’s preview and today’s look at Sunday’s title events will give you a look at what’s possible at this year’s Worlds. You can also preview the course thanks to Helen Wyman and Stages Cycling, here.

To take a look at Worlds, we can look back at the World Cup Zolder from last month. Yes, when the rainbow jersey is on the line, and with likely rain for this weekend, it’s not the same. However, the fifth round of the World Cup in Zolder lets us have an idea of what we might see Sunday.

There are are just two races on Sunday of World Championship weekend—the U23 Men’s race at 9:50 am GMT and the Elite Men’s race at 1:50 pm GMT.

For the Young Americans, Logan Owen who chose to forego the US U23 National Championship race in favor of taking on the Elite men’s contest will line up in the U23 World Championships. Having raced a somewhat abbreviated season he is still in the top 20 of UCI rankings for the U23 men.

Owen is perhaps Team USA’s best chance at a medal in the U23 race. Owen has ridden in to the top 10 on a couple of occasions this season, including last week in Hoogerheide, the Superprestige Diegem and the World Cup Koksijde. They’ll all be taking on Dutchman Joris Nieuwenhuis, who won in Zolder last month, who is the top-placed rider from last year’s U23 World Championships who hasn’t moved to the Elite field, and is ranked third in UCI points. There’s also the UCI’s second ranked Quinten Hermans of Belgium who won last week’s World Cup finale in Hoogerheide and his countrymen Daan Hoeyberghs and the UCI’s top U23 ranked rider and World Cup title holder Eli Iserbyt, who won the World Cup race in Namur and Lignières-en-Berry as well as a number of Superprestige and BPost Bank Troffee series races. Any one of these riders could take the gold medal.

The U23 Men’s race should be a fast fight to the finish.

Like in our preview of the Elite Women’s race, there’s one name to watch: Mathieu van der Poel.

Since returning from an early season knee injury and surgery to repair that injury, the reigning World Champion has been on a tear. Of the last four World Cups races he’s entered, he’s won them all. He won the World Cup race at Zolder last month and most recently won going away with an ever-growing lead last week in Hoogerheide.

After last week’s race, van der Poel told the press that the Hoogerheide track “was not really made for me but if I’m in good shape I can handle every kind of course.” And when asked about his status as the lone favorite for Worlds, he added that “I wouldn’t say I’m the only top favorite because this is something entirely different in comparison with next week. But I think Worlds is a course that suits me very well. I’m happy because I did a hard training week, so I am hoping on some rest and…to renew my title.” When asked about it by the media after Hoogerheide, van Aert said that “[y]ou can’t compare Hoogerheide with Zolder. We have trained specifically for Zolder and I was not prepared for this kind of course. But what I’ve said for a long time is now confirmed, that Mathieu will stand at the start as top favorite. [I’ve been] saying that for a long time already, and now you can see it wasn’t b*llsh*t. I just hope next week I can stay closer to him and make it hard for him and then maybe more is possible.” The 2016 World Championship is also the curtain call for Sven Nys. Winner of 50 World Cup races and a two-time Elite Men’s World Champion, Nys is retiring at the end of this season.

Discussing his performances in the final World Cup and his form ahead of Worlds, Nys was pragmatic with the assembled media. “[Hoogerheide] should [have been] be a good course for me,” said Nys, “but my condition [was] simply not good enough. This is a course that is very honest and the guys who sat in front of me were simply much better than I was. I can live with that. I did what I could do. I have no excuses–I wasn’t good enough and then you don’t have to make illusions for next week. I will do my best to try to help destiny but I don’t see myself fighting for the win or the podium. I can’t make miracles in seven days.” Nys also echoed van Aert some when asked about van der Poel’s recent showings, but also thinks van Aert has it in him to upset the regining champion. “[It]’s not going to be easy to beat [van der Poel]. He is absolutely the top favorite. In the last month he didn’t lose a single race. And if he can win on a course like Hoogerheide then next week it will go even easier for him. But it’s a championship race where other factors can come into play, like nervousness–it’s a completely different thing. I think for sure that [van Aert] should continue to believe in his own power and continue to do his own thing, then there is a lot possible.”

For the Americans, the best medal hopes rest with National Champion Jeremy Powers and his training partner Stephen Hyde, while a good number of American fans will be cheering for the colorful Anthony Clark. They, like the rest of their teammates and everyone else lining up in the Elite Men’s race will have their hands full with van der Poel. 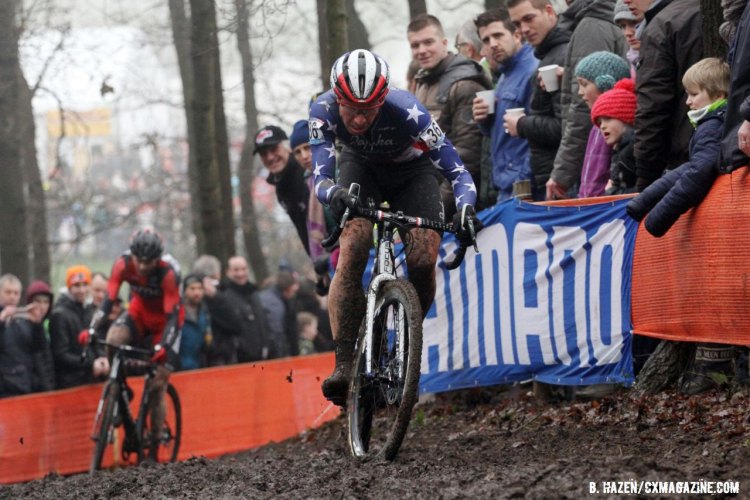 When asked how he was getting ready for Worlds this week, van Aert said that “[t]his week I will do lots of rest and in the second half of the week I will make sure that I get my legs ready to go. I worked very hard to be good for the Zolder course and I’m curious if that will pay off.”

As for the World Champion, when asked if he was relaxed heading into the Worlds, van der Poel said it’s “like that last year too. I’m going home with a very good feeling and I can sleep with a good feeling. I prefer to go into Worlds this way than finishing behind other riders today.”

While we’ll see how each of these races plays out on Sunday, Paul Van Den Bosch, Nys’ coach, summed it up best. “If Mathieu comes with the same legs he had today [in Hoogerheide World Cup], we’ll need a force from above to beat him.”