LAS VEGAS – The Men’s Elite race at the World Cup at CrossVegas started with a furious field that, despite its deep talent, remained tightly together for the first few laps of the race. Tom Meeusen of Belgium led the pack as he dictated a brutal pace for many to follow. The Telenet-Fidea rider continued to press his limits in the early goings, which ended up causing him to crash in the barriers only two laps into the race, although he was able to recover and reattach himself to the back of the lead group.

With most riders remaining content to let the race play out more as a pack race, a stark contrast to how the women’s race went down, Michael Vanthourenhout of Belgium decided to have different ideas. The 2015 U23 winner at the Cyclocross World Championships broke off from the front of the race early in the race with the aid of his teammates on the Sunweb-Napoleon Games team. He pressed his advantage on the climbs, which he handled better than most in the field, to gain over 40 seconds on second place at his best point.

“I was thinking it was the right moment [to attack],” he told us after the race. “The course was very difficult.” In a match akin to the race that played out an hour before, the riders looked around at each other, some seeming to be content with fighting for second. Sven Nys of Belgium had other ideas, and launched an attack, while Wout van Aert was able to stick on his wheel.

“I saw [that I] was strong and that there was a good gap between the peloton and Michael, but I didn’t accelerate at the right moment, and the right guy was on my wheel: Wout van Aert. He did some good races on the road and I knew we had to do a time trial together.”

Nys dragged Van Aert around for several laps while Jeremy Powers (Aspire Racing) of the United States saw that his opportunity was closing quickly. The American didn’t mind keeping four other riders in tow as he chased down the three leaders. The biggest name behind him was none other than Lars van der Haar. Shortly behind them, the 2014-15 World Cup overall winner, Kevin Pauwels was desperately trying to weave through traffic to gain a personal chase of his own. With over three laps to go, Vanthourenhout could feel the strength vanishing from his legs as he reported later, and while he crossed the flyover, he watched the big screen to see where his rivals were riding behind. Within a half lap, Nys made contact with his wheel.

Van Aert decided it was time to provide an attack of his own. Nys responded and Vanthourenhout gave up the last of his energy ensuring he wasn’t going to be left behind for good. Nys bobbled on the steps during his chase, a move that he told Cyclocross Magazine cost him at least five to six seconds, and in that moment, “I knew I was riding for second place.”

The three spent the remaining laps spreading themselves out and finishing with Van Aert standing atop an all-Belgium podium. 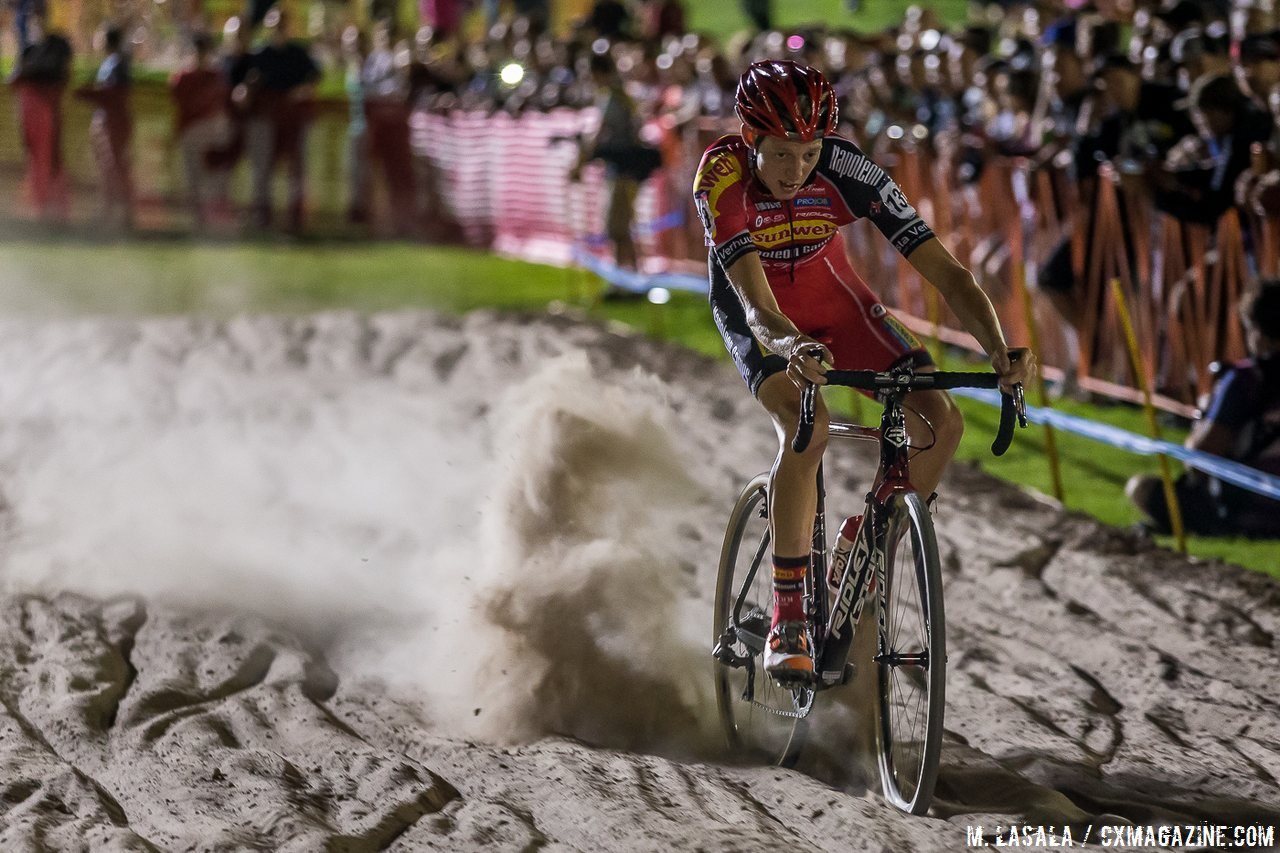 Michael Vanthourenhout made the boldest move, spreading the field out early on. © Matthew Lasala / Cyclocross Magazine

“It was hard in the beginning,” Van Aert told Cyclocross Magazine, “it was not really comfortable to race with such a big group… It was difficult for me to answer [Vanthourenhout’s early] attack because many riders were looking out for me, so I waited to catch up with Michael with Sven, and he was a good partner to do that, and after it was a lot more comfortable riding.”

Meanwhile, Powers was fending off Van der Haar and Pauwels in a three-man race for fourth place. Although Powers was able to lead the group over the final Shimano flyover, the Europeans were able to get the best of his efforts by the finish line.

“I went really hard to establish the gap once I jumped the barriers,” Powers told Cyclocross Magazine. “I jumped the barriers a little uncomfortable for myself. I usually don’t jump them that fast to make that gap, but I hit it as hard as I could to get away, and then Lars was able to respond, seeing Kevin [Pauwels] come across was surprising at the moment, but in real life, it’s not, because it’s Kevin Pauwels.” One of the rides of the day had to be Ryan Trebon (Cannondale p/b CyclocrossWorld), who started near the back of the field in 55th, and rode to 12th place. The tall Oregon-based rider had a rough last season due to an early-season injury, and told Cyclocross Magazine, “My one goal is to make it through the season, and then I really want to be in the races again…last year was so hard to be out there because I didn’t have anything.”

Trebon certainly achieved his goal, taking risks early on to move up within the top ten until getting caught behind a crash and having to pass twenty riders again to come close to a top ten position. The front of the Elite Men’s Race was still well together by the time they hit the barriers. © Matthew Lasala / Cyclocross Magazine

When asked how it feels to be back at the World Cup level, Trebon said, “Really good. I wish I had a better start, and I wish I didn’t get held up a couple of times  behind a couple of crashes.” Trebon said he felt terrible pre-riding the course the day before, but on race day, knew he had good legs. “I was moving up to the top 10, then someone crashed and I fell back to 32nd, and I was like, shoot man, this sucks! I started so far back and I had to take a lot of risks. I used a lot of energy to get up there, I was hoping to have a better race, but I can’t complain.”

Jamey Driscoll (Raleigh Clement) was also another American left to ponder what could have been. The Utah-based former CrossVegas winner had hernia surgery in late July, and knew he wasn’t coming into the race on top form, but hoped to have better luck. “It was painful in the way I was expecting, but I had a lot of [tangles]…I never went down, but I shed a little blood,” Driscoll recalled. “I got held up in a lot of little annoying stupid stuff, starting with a guy in front of me who missed his pedal.”

Meanwhile, Jonathan Page (Fuji), never showed the late-season form he enjoyed last year, but flatted his rear tubular far from the pits, and rolled in to finish a disappointing 57th place.

Stay tuned for full interviews with the podium as well as race photos. Full results below. 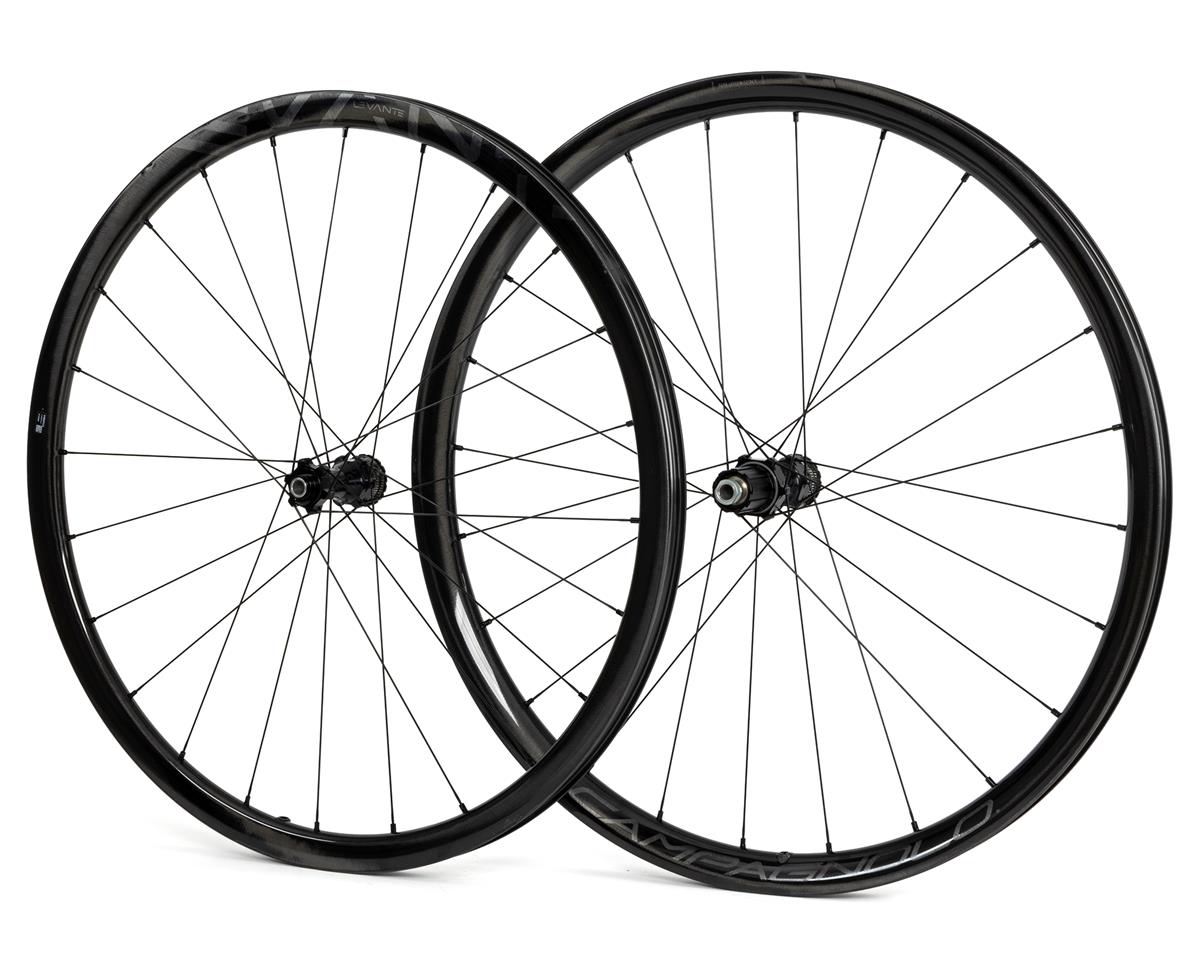 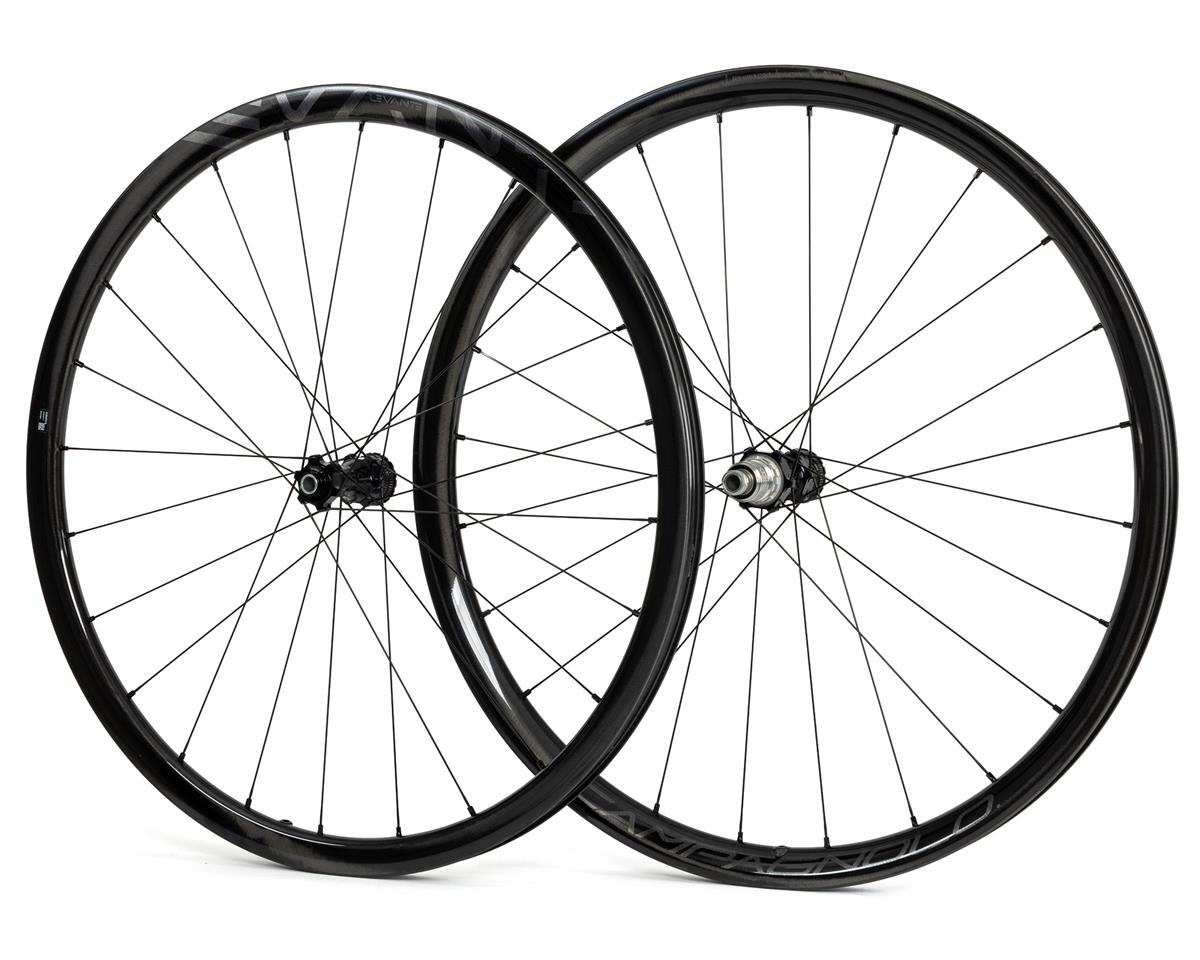 Next post "This Course Is Really Heavy!" Sanne Cant Opines on CrossVegas and American Cyclocross