Americans Bested at the Midnight Ride of Cyclocross as Wyman, Millburn Capture Wins

The Holy Week of New England began this Wednesday with the Midnight Ride of Cyclocross, starting six days of racing compressed into eleven day period. Although the Midnight Ride and Night Weasels are not UCI events, they both have grown substantially and have attracted an international group of athletes. Over the years, the race has become a signature event of Helen Wyman, and for 2015, not only did the British come for the Midnight Ride, but Australia’s top talent did as well.

by Fiona Millburn and Gary David

New England’s Holy Week of Cyclocross kicked off under idyllic skies on the first day of autumn at the Midnight Ride of Cyclocross (brought to you by the Bikeway Source / Bell Lap Racing). A record 420 riders pre-registered to test their skills on the fast and twisting course located at the Fairgrounds in Lancaster, MA. The fifth year of the race saw another upsurge in attendance as Holy Week and cyclocross continue to draw more and more attention from near and far. New Holy Week pilgrims were Australian riders Gary Millburn (Trek) and national champion Lisa Jacobs (Rapha Focus). Also in attendance was Canadian national champion Mike Garrigan (Van Dessel-POC), who arrived just in time for the men’s race.

In the men’s race, Australian rider, Gary Millburn, took control of the race early and didn’t have much trouble sealing the deal on his first cyclocross victory of the season. Last year’s winner Adam Myerson (Cycle-Smart), Peter and Kevin Goguen (Race CF) and Charlie Berhtram (Team Cuppow) all challenged for the win. However none could match the final assault of power Millburn displayed. Peter Goguen managed to gap Myerson to take out second and third respectively. 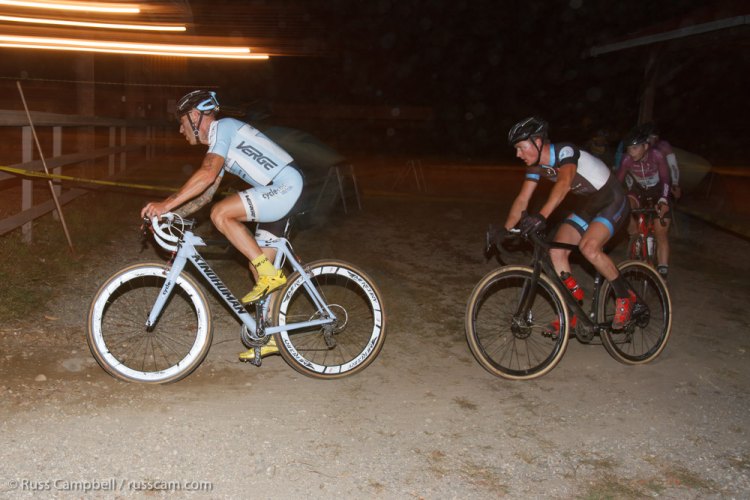 “I felt comfortable the whole race,” Millburn said. “It’s challenging racing with riders I don’t know, I don’t know their race style or how strong they are. I just made sure I covered any attacks they made and took note of where I could make my final move to try and win, I went for it and it worked”

By the last lap the group of 5 had splintered and it was clear Kevin Goguen’s earlier attacks had taken their toll and he wasn’t able to keep pace with Millburn, Myerson and Peter Goguen. Peter Goguen led out of the wood chipped section and attacked up the grassy back straight, Millburn stayed on his wheel however Myerson was dangling off the back. Millburn came around Peter Goguen into the hairpin turn to take the lead, from there Millburn continued to put time into Goguen and took the finish straight alone to take the win. “I don’t even know who the guy was that was on me, but he’s from Australia” Peter said. “and he’s good, he was able to come around me and take the win”

The women’s race saw a much tighter contest between British national champion Helen Wyman (Kona Factory) and Jacobs. This made Wyman’s fourth appearance at the Midnight Ride, where she also puts on the High Tea with Helen Cyclocross Clinic. While other wins for Wyman at the event came easy, that would not be the case tonight. Challenged from the start, Wyman and Jacob would battle back and forth under the lights and through the woodchip turns. Each pressured the other to force a mistake, but neither made one. It would come down to a finish line sprint, something Wyman admitted is not her usual approach to winning. “I knew where I needed to be going into the finish, so that’s what I did,” recalled Wyman. For Jacobs, the opportunity to race at the front with Wyman was an exciting opportunity. “The challenge I have is that I don’t get to too many UCI races, so I always get lousy starts. It was really good to be able to race one-on-one. It was awesome,” Jacobs said. Kate Northcott (West Hill Shop) rounded out the women’s podium for third place. Family obligations will prevent her from competing in all of Holy Week, but noted “I felt awesome, the course was so much fun.”

Wyman perhaps best summarized the sentiment of the event, “It’s always fun to compete with people, especially in a no pressure environment.”