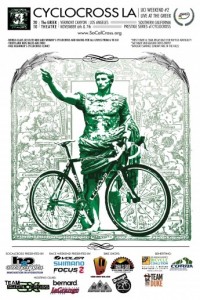 SoCal has its second UCI weekend on tap, and plenty of supplemental events surrounding it.

(GOOGLE MAP LINK HERE)
The cyclocross festival will take place in Griffith Park – Vermont Canyon just north of the Greek Theatre, which sits on the south side of the park in the Hollywood Hills.  Enter park at Hillhurst or Vermont Ave off Los Feliz.  It is the City of Los Angeles’ largest park and a tourist destination including:  Griffith Park Observatory and views of the City below and famous Hollywood sign.

SOCALCROSS TAKES CENTER STAGE AT THE CITY OF LOS ANGELES’ LARGEST AND MOST POPULAR PARK, SO LET’S CELEBRATE THE BENEFITS OF THE BICYCLE! -WORLD-CLASS UCI ELITE MEN AND WOMEN’S RACE!
-CYCLO-CROSS RACING FOR ALL LEVELS FROM 6 TO 65!
-JUNIORS RACE FREE WITH USA CYCLING LICENSE!
-YOUTH AND KIDS RACES ARE FREE!
-FREE BEGINNER’S CYCLOCROSS CLINIC! FUN EVENTS FOR THE WEEKEND:

4:30-7:30PM FRIDAY – MEET KONA’S RYAN TREBON AT ORANGE 20 BIKES FOR A RIDE TO THE PARK, 5PM CX BASICS & 6:30pm HAPPY HOUR: Ryan and accompanying Elite riders will be on hand to teach a mini cyclocross clinic at the course in the Park. He will share his experiences as a cyclocross  and MTB national champion and racing cyclocross in Europe. The ride returns to the shop for some refreshments and happy hour treats. The ride and clinic are free – please arrive at 4:00PM to check in. Lights recommended for the return to Orange 20. ADDRESS:  4351 Melrose Ave. LA,CA 90029 CALL:  323 66-BIKES FACEBOOK MEET UP ROAD RIDES TO THE PARK! Details coming as they unfold.  Supported by the Women’s Cycling Challenge and various cycling clubs across LA!  Look for your local clubs to host rides to meet up and ride to the park.  All dirt trails in Griffith Park are closed to bicycles, but the vistas and routes on the paved roads within the park offer scenic climbs above the City!  AND, the Los Angeles River Bike Path has miles of amazing bicycle paths along the urban river path full of wildlife unseen except from these paths!  Learn about the upcoming LACBC River Ride for volunteers later that month to help improve the 2011 LACBC  Los Angeles River Ride!

1:00pm each day… CLASSIC BIKE PARADE! SHOW OFF YOUR BICYCLE PRIDE! The Bike Parade leads out the women’s Elite race as they prepare to race, the bicycle parade will do one lap in the parking lot just before the elite women’s call ups.

2:30pm each day… FIRST TIMER & TEAM RELAY CX RACE FOR ADVOCACY!  Benefiting the LACBC, CORBA, and the John Wayne Cancer Foundation! Join us for The TEAM RELAY CX RACE for ADVOCACY…. each day at the conclusion of the UCI Elite Women’s race as the pro men get their first call to staging. This first timer friendly race will start/finish on the dirt straight then turn into Kids Race loop and then will make its way into the real course and sand pit to the complete the loop. Tag team for 3 laps. Best team in each category wins. Race, Recreate, Advocate the benefits of the bicycle!  $5 donation per person and we’ll create TEAMS of 2-3. Mass start one team rider or tanden on course at a time.   Categories: 1 – Commuter-SS, 2- CX geared racer, 3- first timer-fun bikes including tandems. Winners will receive awards in each category. 6pm – 9pm SATURDAY NIGHT MID-SEASON CROSS PARTY! Details coming soon!

8:00AM SUNDAY DAYLIGHT SAVINGS HIKE IN THE HOLLYWOOD HILLS. Lead by Team Duke and the John Wayne Cancer Foundation!  Join SoCalCross’ mission to Cross out Cancer.  Meet at 7:30am at the Team Duke Booth… sign up, get some coffee and muffins and head out no later than 8:00am on this short 30 minute hike heading north into Vermont Canyon and up the hill to one of the most amazing views of the City of LA including the Griffith Park Observatory, the Hollywood sign, the City of Los Angeles including downtown LA, central LA and West LA to the Pacific Ocean.   Climb higher up and you can see into the San Fernando and San Gabriel Valley for a 360 degree panorama!  Believe me, it is worth the hike! REMEMBER GRIFFITH PARK IS A VERY SPECIAL PLACE TO ALL USERS INCLUDING EQUESTRIANS AND HIKERS – THE TRAILS ARE NOT OPEN TO BICYCLES. ENJOY THE ROAD…BICYCLES MUST STAY ON THE PAVED ROADS!  THANK YOU FOR YOUR RESPECT OF THIS MOST BEAUTIFUL PRECIOUS RESOURCE IN THE CITY OF LOS ANGELES AND WORK TOGETHER TO PROMOTE THE BENEFITS OF THE BICYLE : ) PARK RULES FOR THIS EVENT: No alcohol in the event or park at any time. No bikes on trails. No smoking in the park. Do not litter! Dogs on leash – this is also coyote corner, so please be careful. Thank you to our series sponsors: H2O Overdrive, Focus, Shimano and Voler!