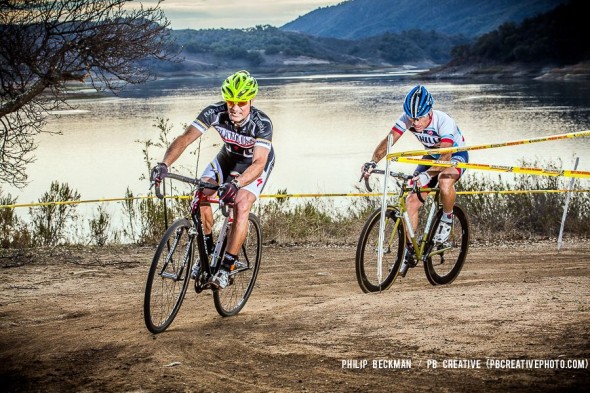 OJAI, CALIFORNIA – Postcard from the Pacific’s edge: “Having a great time, wish you were here.” Just a quick note to the rest of the cold and/or wet northern hemisphere: yes, we are still racing cyclocross in SoCal, and yes, we’re doing it with unzipped jerseys and absolutely killer tan lines. Those with means and motivation would be shrewd to point the compass southwest this time of year.

Like Molly Hurford, for example. If you’re a CX fan, that name should ring a bell. Molly is the managing editor at Cyclocross Magazine, the author of the popular Girl with the Cowbell Tattoo column, the scribe of the book Mud, Snow and Cyclocross, and a bona fide social media diva. This 27-year-old, self-proclaimed journalist-wanderer from Massachusetts, Rhode Island or Georgia (depending on which Google page you’re on), found herself in Southern California not long ago.

She was just in time for the Peloton Cross presented by The Mob Shop. This late-season event — the third and penultimate round of the Cross Fever Series, put on by SoCalCross — took place at the Lake Casitas Recreation Area near Ventura, California. It was a well-done affair in the tight but challenging confines of a lovely section of beach and park on the north corner of the reservoir. Many new faces and expo exhibitors showed up at this event, named for title sponsor Peloton Magazine. These exhibitors and sponsors made this first-time affair quite memorable with some of the coolest prizes awarded all season. But more on that later.

So Molly came, she saw, she conquered. Surprise — the wordsmith’s got skills! Hurford made her first race in California a good one by winning the Women’s A/B soiree by a comfortable margin. Hurford (Colavita/CX Magazine) dueled early with series promoter Dorothy Wong (The TEAM SoCalCross), but at the halfway point of the seven-lap, 45-minute contest, Molly was able to ride away to an easy win. Wong finished second, Carol Ruckle (Team Redlands) third, Lynneal Williams fourth and Isabelle Thompson (Montrose Bike Shop) fifth.

“We got here on Monday, driving straight from the National Championships in Boulder, Colorado,” Hurford said with a smile. “We’ve been having such a good time. I’m so happy to be here. It sure beats racing in -40 degrees, I’ll tell you that. I hadn’t planned on racing, but we got here and found out about it, so I thought I’d check it out.

“This is awesome racing out here,” she continued. “The course was super fun. I wasn’t really sure of what to make of California ‘cross, but you know, it actually measures up pretty well to New England-style technical stuff. They did a great job with the course; they did a lot with this tiny area. I loved it. It was a very small field but I had no idea what to expect. I figured everybody was just going to blow past me at the start. Dorothy was scaring the crap out of me for a few laps. After I got away I was like, how many of the Men’s Bs can I catch? They started a minute up. I got a few.” Taking singlespeed to the next level. © Philip Beckman/PB Creative (http://pbcreativephoto.com)

Unlike Hurford, Brent Prenzlow (Celo Pacific/Focus) participated in his 3,472nd race in California, give or take. At this point in his storied career, who’s counting? The winningest SoCal CX rider ever easily topped the small Men’s A field, leading Jay Kwan (The TEAM SoCalCross), Larry Vanzant (Non Stop Ciclismo) and Kenneth Hill (The TEAM SoCalCross) over the finish stripe.

Prenzlow’s heinous drive through L.A. from his home in Carlsbad was worth it. Along with $100 in purse money, he rolled away with a set of new Scott Syncros carbon fiber wheels. “I had to make it count to come this far up here,” he stated. “It was a small field but it was a great race. Jay and I battled a little bit. They had a really nice prize for getting the holeshot, so it was pretty fast in the beginning. These Scott wheels are one of the nicest prizes we’ve had all season. So — to the guys who didn’t show up — you missed out.”

Where has the season gone? Just one more chance to race cyclocross in SoCal remains until next autumn. The fourth and final round of the Cross Fever Series takes place on Sunday, 1/26, at Pierce College in Woodland Hills.  For more information and to stay connected to all SoCalCross PRESTIGE SERIES activities, be sure to bookmark SoCalCross.org as well as follow it all on Facebook and Twitter.