LOS ANGELES – It’s not often that road race tactics come into play at UCI cyclocross events, but then again, it’s not often that UCI events take place in Southern California. As is the norm for cyclocross in this region, conditions at CXLA were warm, dry, flat and fast.

We’re talking fast, as in, those-funky-new-aero-road-helmets-might-come-in-handy-today fast; fast, as in, deep-dish-wheels-could-actually-make-sense-here fast. Vin Diesel would have appreciated the racing taking place a stone’s throw from Hollywood, because it was fast and furious.

In the Elite Men’s main event, under a phalanx of stage lighting on a lovely Saturday evening, Ryan Trebon (Cannondale/Cyclocrossworld.com) was able to hold off Logan Owen (California Giant/Specialized) for the victory in a sprint that included Danny Summerhill (K-Edge/Felt), Tim Johnson (Cannondale/Cyclocrossworld.com), Ben Berden (Raleigh-Clement) and Adam Craig (Giant Factory Off-Road Team).

For much of the nine-lap race, a peloton — not a word used often in cyclocross — comprising most of the field, circulated nose-to-tail at speeds that would have impressed the California Highway Patrol (CHP). By the halfway mark the torrid pace began to thin the herd, but 13 were still together at the front as the final-lap bell rang. Trebon then went to the sharp end and drilled it.

As he explained the bold move, “It was such a fast race and we had a huge group for most of it, so I just tried to sit and wait until the end. I led the whole last lap. I wanted to stay first wheel, to keep the pace super high and make sure I was the first one onto the final straight. I’m not the fastest sprinter, but I am a strong sprinter when there are heavy legs. I slowed the pace down in the tight section near the finish and then just punched it really hard. Once I got up to speed I just hoped it was enough.”

Johnson, who was nipped at the line by Summerhill to be pushed into fourth, echoed Trebon’s thoughts. “It was the fastest, biggest group we’ve had all year. It’s something we’re not used to. It was really hard to get a gap. The only thing you could hope for is the group would get split up because of a crash or a dab or something, but it was just so fast the whole time. Ryan and I both made a couple digs to try and get some separation but it was obvious that it wasn’t going to work.”

The 18-year-old Owen was all smiles after his second-place finish. As this rising star from Bremerton, Washington, put it, “This was definitely one of my best finishes — it’s my first UCI podium, with all the best guys here except [Jeremy] Powers. It’s very pleasing to be able to do this on this level, especially after just coming back from a World Cup in Belgium. I flew straight here and then did a lot of training with my coach over the last three days getting ready for Nationals, so I wasn’t expecting to do this well.”

Trebon’s triumph secured the Cross After Dark Series crown, moving him just ahead of defending champ Berden, who ended up in fifth for the night. Johnson rounded out the top three. 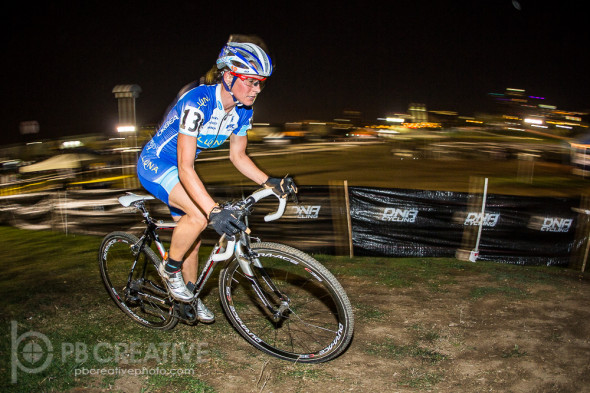 Katerina Nash was the Elite Women’s star, under the lights and in the sunshine. © Philip Beckman / PB Creative

Luna Pro Team’s Katerina Nash was unstoppable. In the five-lap races she appeared to be toying with the relatively small field until the halfway point, then jumped away to build a comfortable gap in a matter of moments.

This multi-time Olympian insisted that it was not as easy as it looked. “This is a really fast course, so I knew it was going to be hard to get away. Once I did I was like, ‘I really have to go now.’ It was a hard push all the way until the end. It’s game on and try to keep the gap, so I had to put the hammer down. It’s great to be racing here in downtown L.A. It was a lot of fun. We drove from Northern California, took three days along the coast and had a great time. It’s been a fun trip.”