BAKERSFIELD, Calif. – SoCalCross Prestige Series competitors received a shock to the system during the penultimate weekend of the 2013-14 schedule. After sweating through the first 14 events in what has been a very warm, dry season, the locals got a taste of what most of the world calls cyclocross.

Just one week after wilting under summer like conditions in Los Angeles, the Hart Park Cross in Bakersfield took place in temperatures that had riders and supporters scrambling for all the winter gear they owned — and then some. Is layering with flannel pajamas USA Cycling legal?

Oh, and by the way, that hard crust on top of the puddles is called ice.

The potential for this event to be even more of a wintry challenge (hello, snowbound Bend and Philly) came, but then quickly left. A late-week arctic storm dropped rain on the course Friday and Saturday morning. The early races got to experience some rare, slick mud, but then the sun came out and made the surface all too perfect for the rest of the weekend. Missed it by that much.

This storm also discharged enough snow in the nearby mountain pass between L.A. and Bakersfield to close Interstate 5 for a few hours, which may have accounted for the relatively low turnout. Either that or many of the regulars decided to go into hibernation.

Too bad, because the snoozers were losers; this tidy event was held on one of the more “Euro” courses around. Hart Park is known for its challenging run-ups, and when combined with a seemingly endless succession of punchy climbs and twisty, off-camber descents, as well as a long section of paved false flat, riders needed to be on their “A game.” Promoter Sam Ames set the course to run basically clockwise on Saturday, and then reversed its direction on Sunday. Sunday’s layout was a preview of what’s to come at the NorCal vs. SoCal Shootout on January 5th, which also happens to be the State Championships.

Nobody had more “A” in their game this weekend than the riders from Team SDG/Felt. Amanda Nauman and Jason Siegle frosted the Women’s and Men’s Elite A classes, respectively. As the legendary L.A. Lakers play-by-play announcer Chick Hearn used to say, “This game’s in the refrigerator. The door is closed, the lights are out, the eggs are cooling, the butter’s getting hard and the jello’s jigglin’!”

On Saturday, Nauman was able to power past a fast-starting Nicole Brandt (LaGrange/Michelob Ultra) at the beginning of the second 1.8-mile lap and was unchallenged for the remaining three circuits. Brandt’s two falls, and the lingering effects of an illness made Nauman’s job easier. Sunday’s results were exactly the same, but the storyline played out a little differently. Nauman grabbed the holeshot this time, while Brandt, wearing the Voler Series Leader jersey, kept it on two wheels for all four laps. The gap at the end was still as substantial as the day before.

According to Brandt, “Amanda just has another gear or two when the road turns up, and she’s got better power for the run-ups too. Amanda’s fast, so it’s always good to have her out here, to have someone to chase.”

Nauman stated, “Nicole always has get-up-and-go power at the beginning, which I can’t hold onto sometimes. We’re pretty evenly matched but if she makes a mistake it sets her back too much. I was able to ride about 90 percent of one of the steep hills and she was running all of it; I think that’s where I was getting some time over her.”

With the sun dropping behind the hill bordering the south side of the park, wind chill may have become a bigger concern for the meager fields of the men’s races than the competition itself.

Gareth Feldstein (Ritte CX Team) did all he could to uphold hometown honors in the men’s race, but there was no stopping Siegle. Feldstein charged to the front and led early both days. On Saturday, Siegle moved up from a fifth-place start and then countered a second-lap attack by Feldstein to find the front. Feldstein and Brent Prenzlow (Celo Pacific/Focus) were left to fight over second place, a significant distance ahead of a battle between Dave Sheek (SDG/Felt) and the weekend’s 35+ A class victor, Ryan Dahl (SPY Giant Ride).

Finishing the hour-long race with eight laps done, the top five were all separated by about half a minute each: Siegle smoothly topped Feldstein, Prenzlow, Dahl and Sheek in one of the least dramatic races of the season — perhaps ever.

Feldstein made things interesting the next day by taking the holeshot once again and then dropping his chain twice on the first lap. After a bike change he began a compelling charge from well behind that would eventually find him in third place.

Siegle, meanwhile, was checking out on Prenzlow, and would eventually best the multi-time SoCalCross champ by over a minute. Sheek bettered his weekend by one place for fourth, despite some frozen fingers, while John Behrens (Velo Hangar) rounded out the podium. 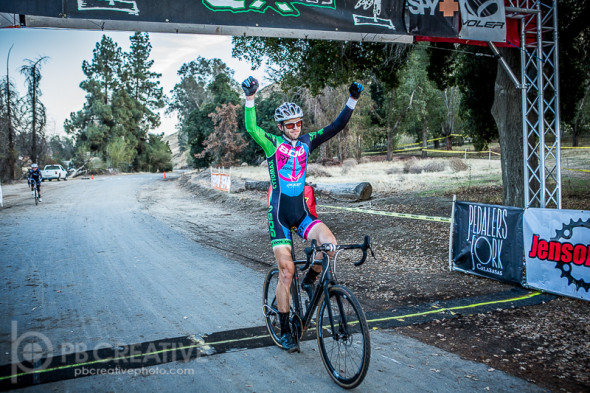 What more can be said about Siegle’s performance? Despite coming off an Achilles tendon injury, sustained in a training ride that forced him to hike in his cycling shoes for more than three hours, he reported that his power meter numbers for the weekend were the best he’s seen in some time. “I came here to get two wins and that’s what I got,” he concluded.

Next weekend’s Santa Cross doubleheader, to be held at Griffith Park in Los Angeles, draws the “regular season” to a close in SoCal. For more information and to stay connected to all SoCalCross Prestige Series activities, be sure to bookmark SoCalCross.org.