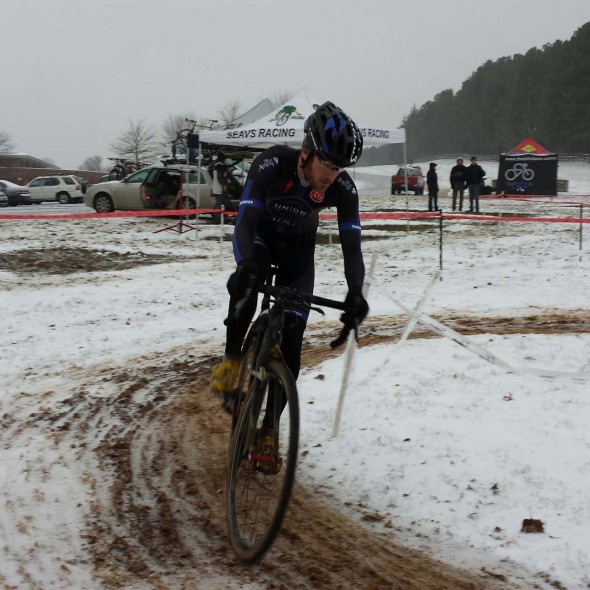 Greg Wittwer (C3-Twenty20 Cycling Co.) on his way to the win at the Super 8 season finale. © Neil Schirmer

RESTON, Va. – Mother Nature provided a snowy and icy canvas for racers to put the finishing touches on their local racing seasons, Sunday at Lake Fairfax Park at the Capital Cross Classic. In spite of the apparent adversity, attendance and spirits were high throughout the day for the last race in the Bikereg.com Super 8 series.

Snow was already on the ground for the early races, and throughout the day conditions varied between snow, sleet, and freezing rain.  With temperatures hovering right near freezing, conditions were wet, but the cold helped mute the muddy sections somewhat, keeping the mud gooey and not as sloppy as one might expect given the significant moisture.

Even though she clinched the overall series title after race number seven at Rockburn Cross, Verge Sport jersey competition winner Cheryl Sornson (Team CF) showed up to put an exclamation point on her season in the Elite Women’s race.

Through the first lap, the top three riders were all within a second of each other, with Sornson leading Allyson Tufano (Sportif Coaching Group) and Misty Tilson (Pro Tested Gear). As the riders hit the paved start/finish section of the course, Sornson put in a hard effort and opened a gap over the others, to begin what would be a series of jabs against the chasers that gradually accumulate into the winning technical knockout. As Sornson slowly and steadily increased her lead, the battle for second place raged on between Tufano and Tilson.

The decisive moment in that battle came in the middle of the race when Tufano hit the deck after clipping Tilson’s wheel in the last turn before the barriers. This allowed Tilson to gain a firm grasp on the second position that she would not relinquish. Despite a strong chase, the riders maintained the same order crossing the line, with Sornson taking her seventh Bikereg.com Super 8 victory in a row, 42 seconds ahead of second place finisher Tilson, with Tufano following in third.

Like Sornson on the Women’s side, Wes Schempf (SEAVS/Haymarket p/b Van Dessel) lined up for the Men’s Elite race at the Capital Cross Classic having already clinched the overall series title in the Verge Sport jersey competition at Rockburn. When the referee’s whistle sounded the start, the Elite Men were treated to the worst conditions of the day as the precipitation changed entirely to freezing rain. Greg Wittwer (C3-Twenty20 Cycling Co.) took the holeshot. Schempf missed his pedal at the start, which put him mid-pack at the first turn. Not wanting to let the race get away too quickly, Schempf chased hard to make up the ground he lost, riding through the field to catch Wittwer’s wheel shortly after riders passed through the double-sided pit for the first time.

When the pair got to through the uphill run at a set of stairs on the back side of the course, Schempf had trouble clipping into his pedals, which were freezing up in the deteriorating conditions, allowing Wittwer to increase his lead. Schempf again regain contact with Wittwer after coming out of the wooded section through the course’s signature downhill “chute,” but at the next uphill, and in the subsequent barrier section, the same scenraio played out. Wittwer put time into Schempf with every dismount and remount, who was ultimately unable to make up the ever-increasing gap. In decisive fashion, Wittwer took the wire-to-wire victory in just over a minute over second place finisher Schempf, with David Flaten (US Military Cycling) following in third.

Congratulations to all of the Verge Sport jersey competition winners for the 2013 season.