WASHINGTON, D.C. — Racing in the heart of the nation’s capital on Sunday took place with cool and windy conditions for the final day of DCCX. In addition to points for the Pro Cyclocross Calendar (ProCX) standings, the dash for cash and top honors in the Parkway CX Trophy presented by Union Craft Brewery were on the line. DCCX races were held for a 12th year on the north side of metro Washington, D.C. on the sprawling 272-acres of the Armed Forces Retirement Home.

Knifing through the strong winds and carving corners for repeat victories in the elite races were Sunny Gilbert (Ellisville, Mo./Van Dessel Factory Team) for the women and Kerry Werner (Birdsboro, Penn./Kona Maxxis Shimano) for the men.

While Werner clinched the Elite Men’s top prizes for the Parkway CX Trophy, Gilbert was close to overcoming a 30-second deficit for the Elite Women’s crown. Even with a 10-second time bonus for the race win, she came up four seconds short. Rebecca Fahringer (Concord, N.H./Kona Maxxis Shimano) overcame a late crash to finish third in the Women’s race and took the Elite Women’s award jersey and prize money as the Parkway CX Trophy champion.

Big crowds at DCCX saw local cycling legend and three-time DCCX winner (2009, ’10, ’17) Arley Kemmerer (Palmerton, Penn./Fearless Femme Racing) win the holeshot. She did not control the pace for long, as Saturday’s winner Gilbert took the lead halfway through the first lap of the 3.2-kilometer course. On her wheel from the 32-rider field was Fahringer right away.

“I had a great start. We were all riding well. It was fast,” recounted Gilbert about the first lap. “I was right behind Arley (Kemmerer) and then I passed Arley. Then we hit a loose corner and I just laid the bike down. Six or seven women passed me. I got up, made sure the chain was still on, and just jumped back on my bike. I was just patient and found my opening on one of the off-camber corners. I passed four women on the inside and then we had a race.” With three laps done and two to go around the pastoral grounds of the Armed Forces Retirement Home, it was the now-familiar duo of Fahringer and Gilbert matching each other at the front. Kemmerer had dropped back and it was another three-time DCCX champion (twice in 2014, ’17) C. Williams moving into third place.

A flat tire and a crash by Fahringer would take her out of a repeat head-to-head battle with Gilbert.

“I haven’t flatted in three years. I flatted and had to ride it for a while, drifted back to Sunny coming in with one to go,” said Fahringer about her mishap on the course. “I pitted. It was a slow exchange. And then the gap got over 10-15 seconds. Closed it down, I was within three seconds, and the same reason I crashed yesterday, I got excited about winning a bike race. I slid out and hit my rear derailleur, which went into crash mode. After that, it was just fighting for the (Parkway CX Trophy) series. I managed to eke out a podium.” With one lap to go, Gilbert began to stretch a small gap into a 12-second lead over Fahringer, who had recovered.  Nolan moved into a battle for a podium spot. Gilbert would win in a time of 42 minutes, 17 seconds. 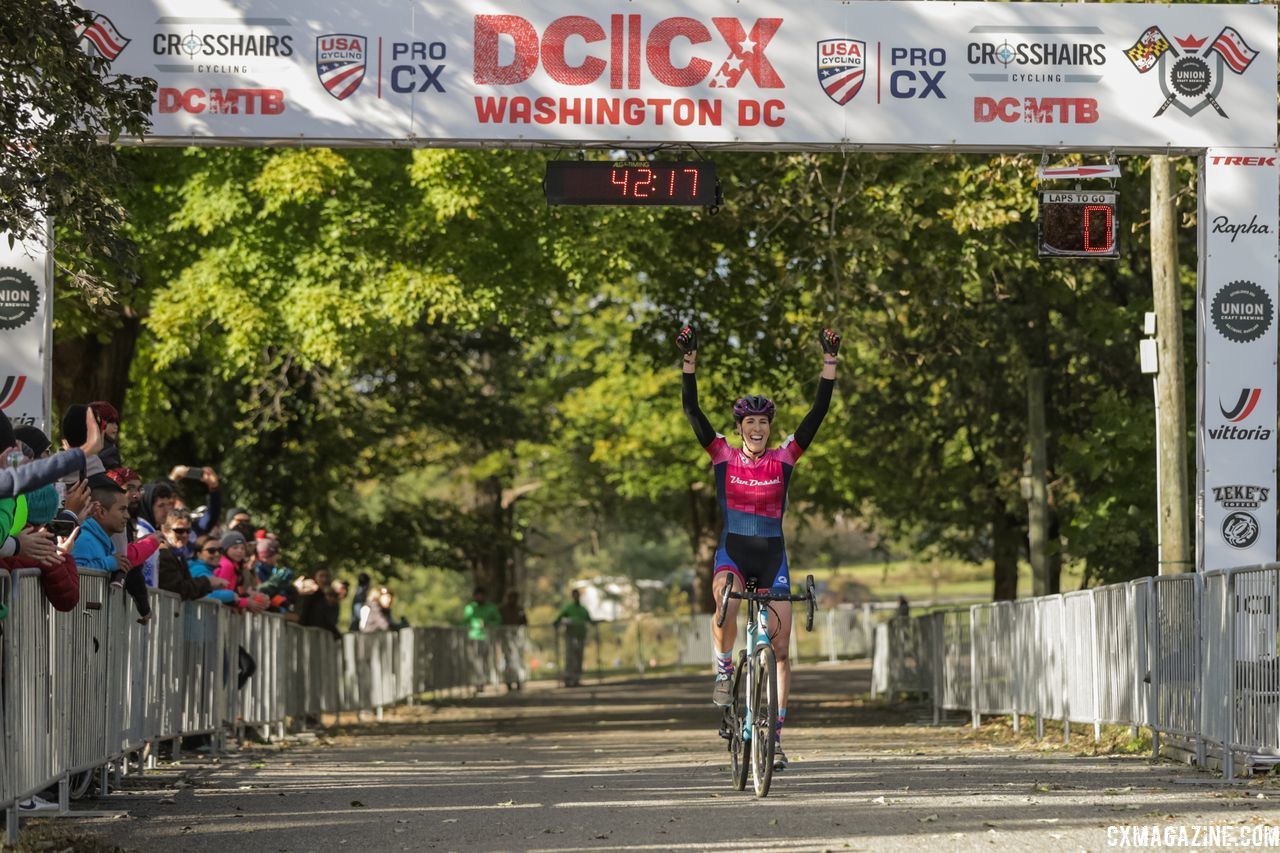 In the sprint for second, Nolan took second place and Fahringer would settle for third. It was a reverse podium finish for two women, as Fahringer earned the silver and Nolan the bronze on Saturday. Fahringer would finish 17 seconds behind Gilbert, maintaining enough seconds to secure the Parkway CX Trophy. “I just felt super flat the first two laps and then the third lap in, I think it was the (Rapha) prime lap, everything started clicking,” said Nolan, who finished third on Saturday. “I started feeling confident on my lines. And then the last lap, I was able to capitalize on every little climb and get a little bit ahead. Things just worked out.”

“It was a well-run event. It was cool to be racing in the nation’s capital. The race was a super fun venue, great competition. I’ll definitely come back.”

On the Elite Men’s side, Werner was in command yet again on Sunday. He took the holeshot. He rode the stairs. He jumped the barriers. He won the race. It was his sixth consecutive victory at DCCX, sweeping the weekend contests in 2016 and 2017.

“One thing I was proud of was not getting off my bike at all this race, which was cool,” said Werner. Kerry Werner rode the stairs en route to reaching his goal of not getting off the bike. 2018 DCCX Day 2. © Bruce Buckley

He was also proud to earn the cash bonus for the Rapha prime on Sunday. “Right at the start, got the holeshot and settled in. The front group established itself, Travis, Eric and me. Instead of the prime being on the first lap, it was on the third lap. My goal was to get the prime, $250. So I sent it really hard and just opened up a big gap. It came out to over 15 seconds, so I just kept the throttle on.”

The Men’s eight-lap race was full throttle from the start with plenty of action in the 33-rider field with other podium spots up for grabs. Werner had company on the first two laps, joined at the front by Travis Livermon (Winston-Salem, N.C./The Endurance Collective) and Eric Thompson (Asheville, N.C./MSPEEDWAX). After three laps, Werner opened his lead to 15 seconds over Livermon and Thompson. After each lap, he would gain more time, growing his lead to more than 50 seconds with three to go. On that same circuit, the Livermon-Thompson duo had also gained time over the chasers, distancing themselves by 30 seconds.

“I was feeling a bit better than yesterday. I tried different lines in some corners. The big motivation for me the last two laps, it was doable to keep my race time in under an hour. So the last two laps I was trying to make that happen, and I fell short by a couple of seconds,” said Werner, who finished in a winning time of 1 hour, 10 seconds. “With the wind today, once I had a bit of a gap, I knew that Travis and Eric weren’t going to come after me, they were going to play games with each other because nobody would do work in the headwind. I kind of knew once I had that gap that it would be me unless something weird happened.”

Nothing weird happened and Werner took another DCCX crown and the Parkway CX Trophy title. It took another 1 minute, 7 seconds for the next riders to cross the line. In a sprint, Thompson took silver and Livermon got the bronze, a reverse of podium spots from Saturday. Aitken and Cloutier would round out the top five. “Kerry walked away from us, and we tried to do our best to stay collected and race smart,” said Thompson. “I had the series in mind today, between Baltimore and here (D.C.). It was a close race between Travis and me, and I knew that he would come through strong at the end just like he did yesterday. He put down an unreal two-to-go lap, and I almost lost him. It took everything to just hold his wheel. Luckily, it came down to where I wanted to go, right before the pavement.”

Livermon said the windy conditions made the course extremely different from Saturday. He did plan to wear down his opponents earlier in the race, but it did not play out that way.

“It was really similar to yesterday. Gave it everything I could with two to go. I didn’t shake Eric, so that kind of blew my confidence a little bit,” Livermon noted about the race. “But I kept trying. And then it came down to the sprint. He passed me right before we hit the pavement. I couldn’t believe he passed me, coming into the pavement and the wind. We opened up the sprint and I pulled out of my pedal, and that was it. I don’t know if I would have got him or not, but it would have been a lot closer.” The inaugural Parkway CX Trophy series was a four-race omnium-style competition at two events and four days of racing between Charm City Cross and DCCX. The two Mid-Atlantic events partnered with Union Craft Brewing of Baltimore, Maryland to provide award jerseys and a $4,000 prize purse for women and men. Winners were calculated on cumulative time, rather than points, at Charm City and DCCX.

Next on the calendar for ProCX, Oct. 27-28, will be a doubleheader of events in Cincinnati, Ohio and Jamesburg, N.J. C2 races will be held both days of HPCX in New Jersey.

In its 18th year, HPCX is the second longest-running UCI cyclocross event in the country. The two days of racing at HPCX are also part of the Mid Atlantic Cyclocross Series.

This is the 15th year for Cincinnati Cyclocross (CincyCX), and the first time back to Kingswood Park in Mason, Ohio since 2016. C1 races for women and men will be held on Saturday, with C2 races on Sunday. Amateur events will also include competitions for the Ohio Valley Cyclocross Series.