WASHINGTON, D.C.—Bicycles and cowbells took center stage at The Armed Forces Retirement Home in the heart of the nation’s capital this weekend for DCCX, one of the largest, internationally-sanctioned cycling events in the Mid-Atlantic region. In its 12th year, DCCX is part of USA Cycling’s Professional Cyclocross Calendar (ProCX) and delivered excitement as the final two days of competitions to decide winners of the Parkway CX Trophy presented by Union Craft Brewery, with $4,000 prize purse and award jerseys.

On Saturday, the Elite Women’s Category 2 contest came down to duel to the line between two of the top three women in the Parkway CX Trophy series. Sunny Gilbert (Ellisville, Mo./Van Dessel Factory Team) pushed across the line a bike wheel in front of Rebecca Fahringer (Concord, N.H./Kona Maxxis Shimano) to score her first ProCX win of the year.

Kerry Werner (Birdsboro, Penn./Kona Maxxis Shimano), the current ProCX points leader for Elite Men, controlled the men’s contest from start to finish. Donning the leader’s jersey for the Parkway CX Trophy, he maintained control of the series lead with the DCCX win.

Gilbert Ekes Out Win Over Fahringer

Saturday was a mild and partly cloudy day after overnight rain was enough to keep the dust down and create tacky corners.  The 3.3-kilometer course in the Park View neighborhood of Washington, D.C. traversed the grounds of the home for retirees of the United States Armed Forces, passing near the Lincoln Cottage.

And passing quickly, as the Elite Women’s field of 32 riders bolted straightaway with seven riders at the front, Gilbert taking the holeshot. Sponsor Rapha offered a $250 prime payout to the fastest ride on the first lap, and Gilbert took that too.

“That was a move to get in front before we hit that first off camber with all the roots,” said Gilbert about taking the first lead from the holeshot. “That was the strategy—hit that in first if I could but definitely behind someone’s wheel that I could trust. I hit without a lot of brake, and I knew I could ride it. I was riding really well today. I felt really confident.” 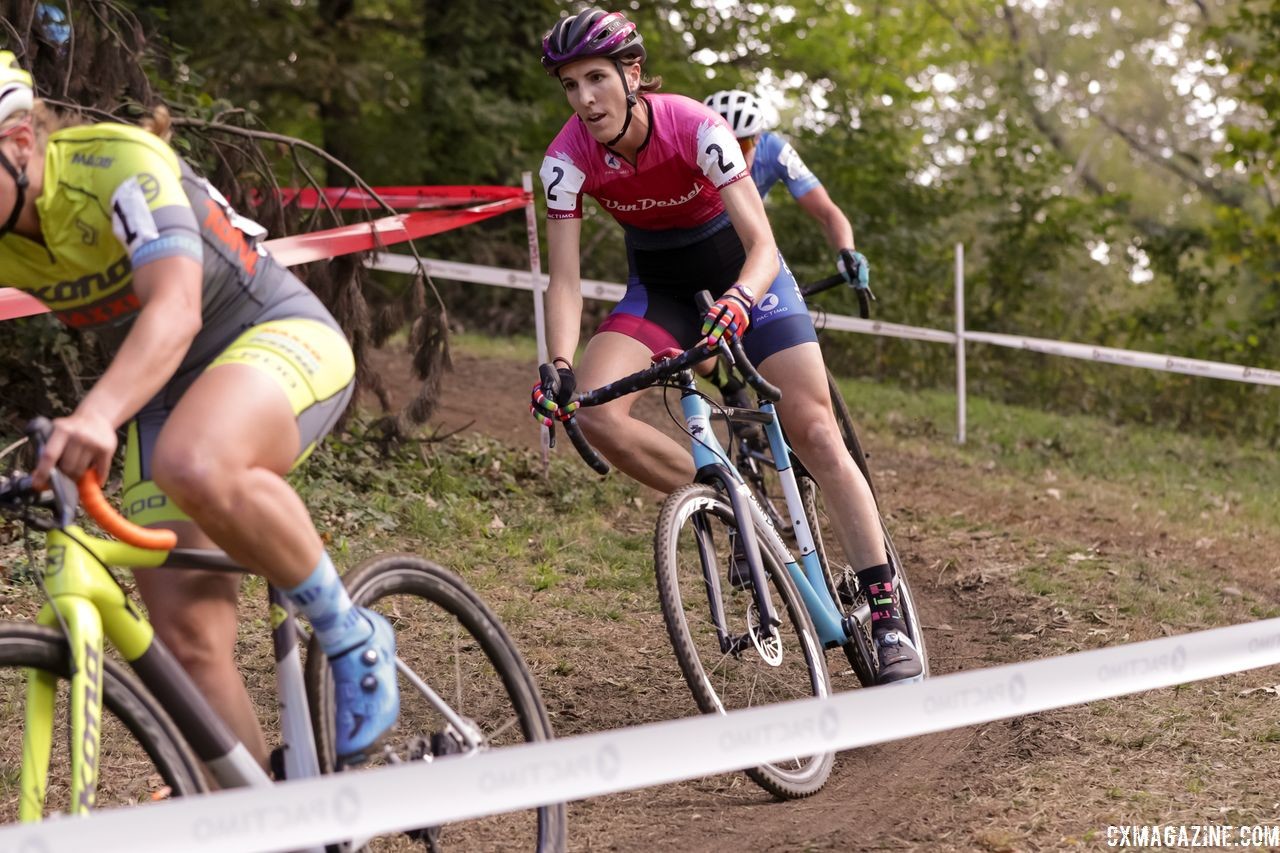 Just one lap later, Gilbert caught Fahringer at the front and the race for the gold medal was on. Rebecca Fahringer and Sunny Gilbert battled to the end. 2018 DCCX Day 1. © B. Buckley

“Lap two I lost some contact. She definitely had a gap on me. I was dangling,” said Gilbert, who had never raced at DCCX before, about catching Fahringer for a 1-2 battle in the second half of the race. “She bobbled a corner, just an off camber on lap three, and I caught back on. And I started feeling a lot stronger after that. We started attacking each other a little bit. I felt pretty strong. She was actually hitting the straightaways better than I was, just hammering, throwing down the power. Actually, that is why I did not think I would win.

“But the last lap she made some mistakes. I was able to take the lead a couple of times and a couple of bike lengths a couple of times. She would always attack right back. We were both in it to win it. And then on the last lap, I came around the pit, I heard my husband Doug say ‘You’ve got this.’ I was on her wheel, about a bike length separated us. And I sort of looked over and said ‘Yeah, I have something.’ I was drafting about half that finishing straightaway, and then I just came to the left, threw in a dig and even threw the bike.” Gilbert won Saturday’s race by the slimmest of margins. 2018 DCCX Day 1. © B. Buckley

Gilbert would win Saturday in 42 minutes, 14 seconds. In second place was Fahringer with the same time.

“Literally, it was almost as close to the end of the first lap as it was to the finish,” explained Fahringer about her battle with Gilbert. “But I didn’t dig to get it (the holeshot) because I thought I’d rather have the win than the prime. So she got it. From there, after that second lap, I thought ‘Sweet, I’m going to win a bike race today.’ Famous last words.”

For three full laps, the two pros played cat and mouse. Gilbert tried a final attack on the stairs in the last lap, but Fahringer returned the punch passing the pits and headed to the final stretch for the sprint. It was the first time both riders had competed at DCCX.

“I feel really good. This is the first race in probably two years where I really pushed the pace and I was on it from the gun,” Fahringer added. “I made four pretty bad bobble mistakes, but the mistakes happened because I was pushing the pace. I’m obviously disappointed they happened and they sort of allowed gaps to get close. But I’m happy I pushed myself.”

Behind the twosome, Caroline Nolan (Chico, Calif./Voler / Easton / HRS / Rock Lobster) had caught the chase group, and then made her own move into third place with two to go. She was out of the saddle in pursuit several times, which allowed her to finish 14 seconds back for the bronze. From the early chase group, Carla Williams would finish fourth, Zaveta fifth and Lily Williams sixth. 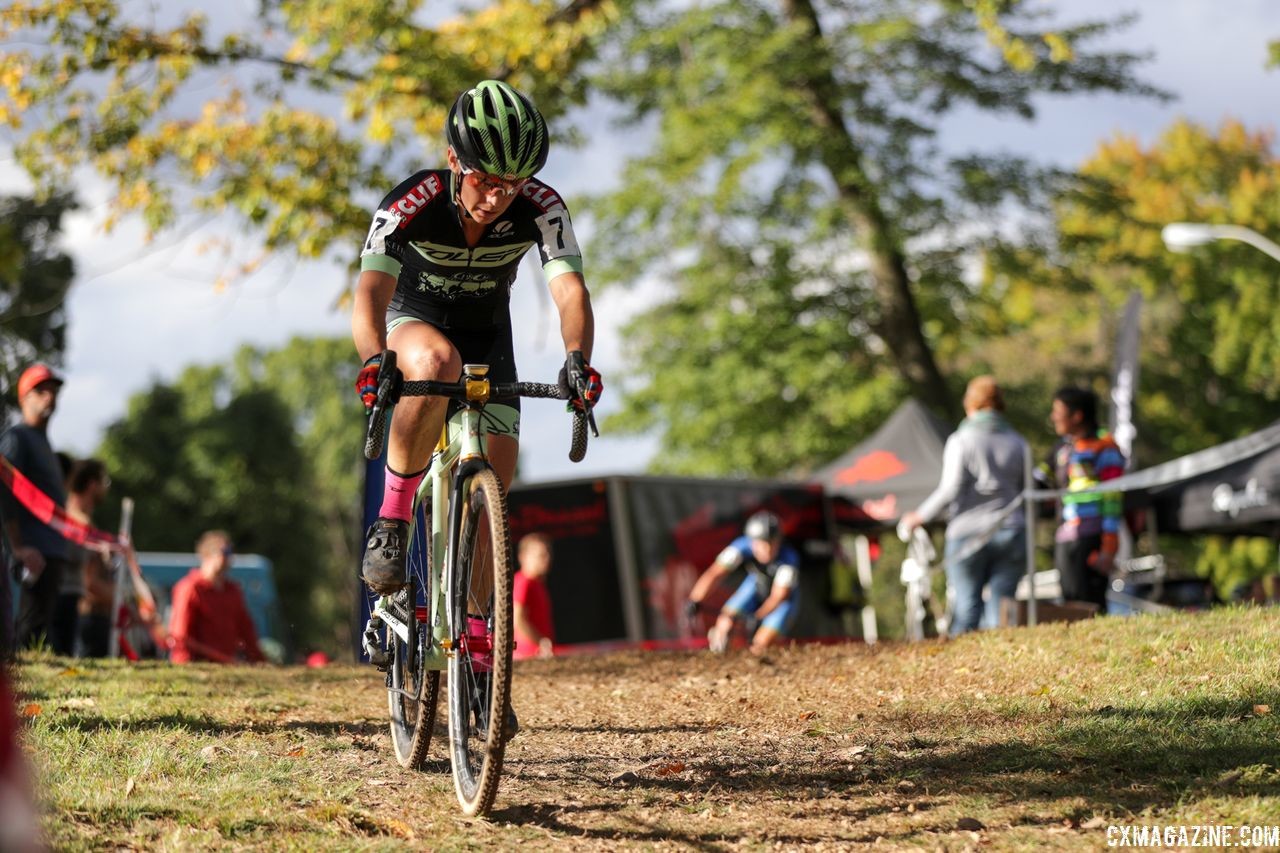 “I’m really glad I made the trek,” said Nolan about making her first trip to DCCX from California. “The course was awesome, just super fun. I’m really happy it rained a little bit last night, so it made it pretty tacky and interesting in some places.” One of the veterans of DCCX was Werner. In the last four starts since 2016 at DCCX, he has won them all. Saturday was no different, as he took the lead from the holeshot.

“My legs hurt. I went pretty hard out there,” said Werner, who is from Pennsylvania but currently lives in North Carolina. He scored his fifth ProCX win on Saturday at DCCX. “We got some rain last night, and the track was already moist, so we had a spongy, power-sucking dirt. Even being out front by myself, it was just really conducive to going hard all the time. So once I had a bit of a gap, it was just keep a steady throttle on all race and try not to make any mistakes. That was the plan.” From the chasers, Cloutier and Livermon would attack with four laps to go. With not much shakeup, Livermon put more effort into another launch with three and a half laps to go. Cloutier could not follow, but Thompson was able to match the effort. “So Kerry gapped everyone pretty quick. Then there was a group of four or five. On the pavement by the end of the first lap, I got on to them. And then as quickly as I could, got to the front of that group because that’s my style,” said Livermon, who was coming back from a summer knee injury. It was his second ProCX race of the year. “It was down to just Eric and me, and we did the last three laps, just the two of us. Coming into the last lap, we came up the pavement pretty slow, not too hard. We hit the grass and I went for it. It’s a pretty hard section. There are several steep hills. Then you go into all the turns.”

The duo had closed down the gap to Werner in 3 laps to just 10 seconds, but nothing more. Werner took the win in 1 hour, 33 seconds. In second place, just nine seconds back powered Livermon. He would gain 10 seconds over Thompson, who would ride in third. It would be the first ProCX podiums for both Livermon and Thompson. “I think there were five total in the chase group behind Kerry. So that was a bigger group than I was expecting at the beginning,” said Thompson. “But there wasn’t a lot of movement in the group, which was nice in a way. It lends itself to a few of us guys at the front to put down the power and kind of break it up. Travis and I were able to get away. I just held on for dear life on his wheel. He was just riding so strong. He seemed content, and on the last lap he showed it. I did all I could do to just hang on for the podium.” 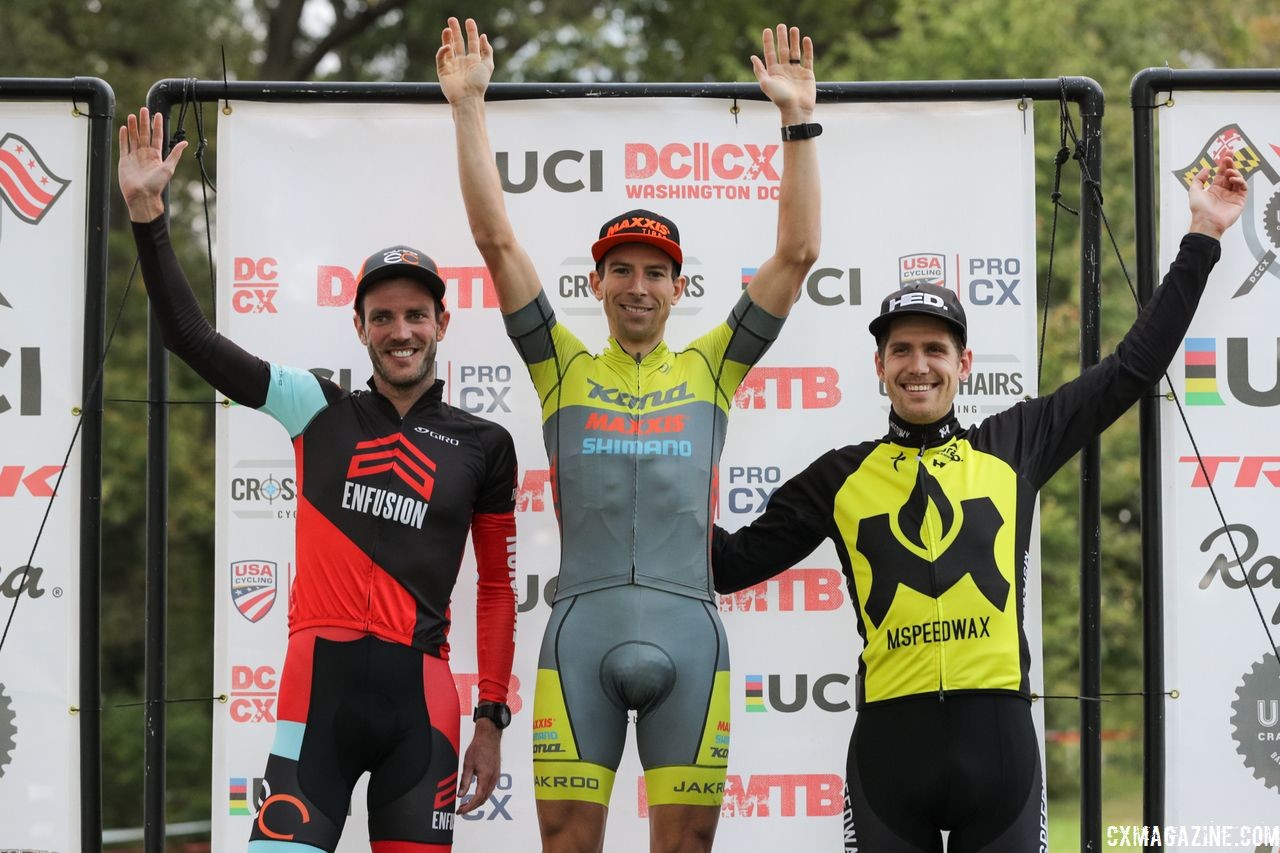 ProCX races continue Sunday in Washington, D.C. and champions will be crowned for the Parkway CX Trophy, is a four-race, timed omnium series.

“There’s always a really good crowd,” said Werner, now five-for-five in starts at DCCX. “When you see the finish line crowd it’s always really big, which is cool. And then being from Pennsylvania, so it’s always nice to have a bunch of cheers. This year it was cool to see Charm (City Cross) and this race do a series, this weekend being the final.”

The early leaders from Charm City Cross in the Parkway CX Trophy series were Kaitie Keough (Colorado Springs, Colo./Cannondale p/b CyclocrossWorld) for the Elite Women and Werner for the Elite Men. Keough was not competing at DCCX, so the Women’s title is up for grabs on Sunday at DCCX, with Fahringer holding a slim 30 second-margin over Gilbert. Werner leads the series for Elite Men by a large margin. The prize purse is $4,000.