The world’s best ’crossers convene again this Sunday, October 24th, for the second round of the World Cup in Plzen, Czech Republic. Once again, we’ll be providing live coverage to keep you up on the action. The women’s race is scheduled for 13:00 local time (7:00am Eastern), the men’s for 15:35 local Czech time (9:35am Eastern).

World champ Zdenek Stybar continues his impressive early season run with six straight victories to start the year, including a dominating performance in last weekend’s World Cup in Aigle, Switzerland. The Czech rider won his World Championship in front of a home crowd in Tabor, and has to be the odds-on favorite coming into Sunday. 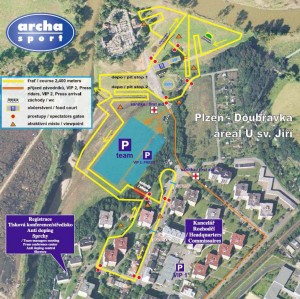 Niels Albert recovered from a slow start to fight his way to second last week, and the Belgian looks to have finally re-found the form that he’s been looking for. For that matter, Albert’s entire Belgian team should be a factor – all eight of the Belgians finished inside the top 12 in Aigle, and Sven Nys was an early animator before eventually fading to ninth.

American Jonathan Page reported feeling good last weekend, but a crash derailed his efforts. Page will be the lone American in the men’s race.

American Katie Compton, winner in World Cup #1 in Aigle, has elected to take a weekend off from racing, which means there will be no leaders jersey present in either the World Cup or Saturday’s Derby City Cup USGP in Louisville [See our Louisville preview here]. Her compatriots will attempt to pick up the flag – Sue Butler has had a phenomenal early season, Amy Dombroski is looking for her breakthrough European result and Cyclocross Magazine regular contributors Christine Vardaros and Canadian Vicki Thomas will also be in the mix. Thanks to the reshuffling of UCI points, Butler may have a clean line towards the holeshot she seeks.

Czech Katerina Nash will look to feed off of the home crowd and improve on last week’s third place finish. Young Dutch sensation Sanne van Paassen will certainly pull out all the stops in her quest for the top spot, and perennial favorites Daphny van den Brand (second in Aigle) and Hanka Kupfernagel will also be favorites for the podium. Van den Brand may find extra motivation now that she’s set an end date for her career. Britain’s Helen Wyman had a great ride last weekend to claim sixth and will be looking to continuing moving towards the top.

If you missed this great video of last weekend’s women’s race, it’s well worth a look. And you can replay our live coverage from Aigle any time.

Next post Dancing in the Pain Cave and the Proper Warm Up? – A Column by Adam McGrath