ASHEVILLE, North Carolina—The only race of the day to feature riders older than 16 was the Collegiate Relay race. Co-ed teams of four riders from both Division 1 and Division 2 schools raced for four laps in a bid to take home the title for their respective schools.

In the Division 1 race, Brevard led Marian as the racers flew off the start pavement and onto the grass. Many picked Brevard to take the race but tenacious riding and a clearly defined strategy from the well oiled Marian squad was able to bring the race home in the finale.

The Brevard team fell back briefly on the first lap as Florida took to the front followed by Fort Lewis and Marian and through two laps stayed on point as Fort lewis and Marian traded positions as the teams traded riders in the exchange area.

But by the final lap Marian had a solid, but tenuous gap over then second place Brevard and third place Fort Lewis when Marian’s anchor, Drew Dillman, who won yesterday’s individual Collegiate Men’s D1 title, took off in pursuit of the win. Dillman was able to secure Marian’s victory, but behind the battle raged right to the line with Fort Lewis’ final rider just edging out Brevard’s anchor for second place.

The Division 2 race had it’s own drama playing out as the Division 1 race went on. Staged and starting just minutes behind the Division 1 race, it was Furman’s own Cooper Willsey, who took the individual Collegiate Men’s D2 title yesterday who set a furious pace trying to establish an insurmountable lead from the gun but it was King University’s Corey Remmer who led the group into the first curve.

Riding smooth and stead, King University stuck to their plan and each rider made steady progress over the length of the race to put them in a position to win. On the last lap, it was King University’s anchor rider Emily Cox that finally made the catch and pass against Furman, which had taken the lead earlier, on Ingles Heckle Hill. From there she powered away and brought the win home for her school.

Dean Peterson, the coach at Marian, pointed out that the co-ed relay event really brings out the spirit of collegiate racing and shows cycling in the same light that other college sports are generally viewed. “We’ve been lucky with our string of successes in cycling relay events, but it’s something we work for and are happy to win.”

Meet the winning squads and see the full results for both races, below.

Photos from the race are in a slide show below the results. 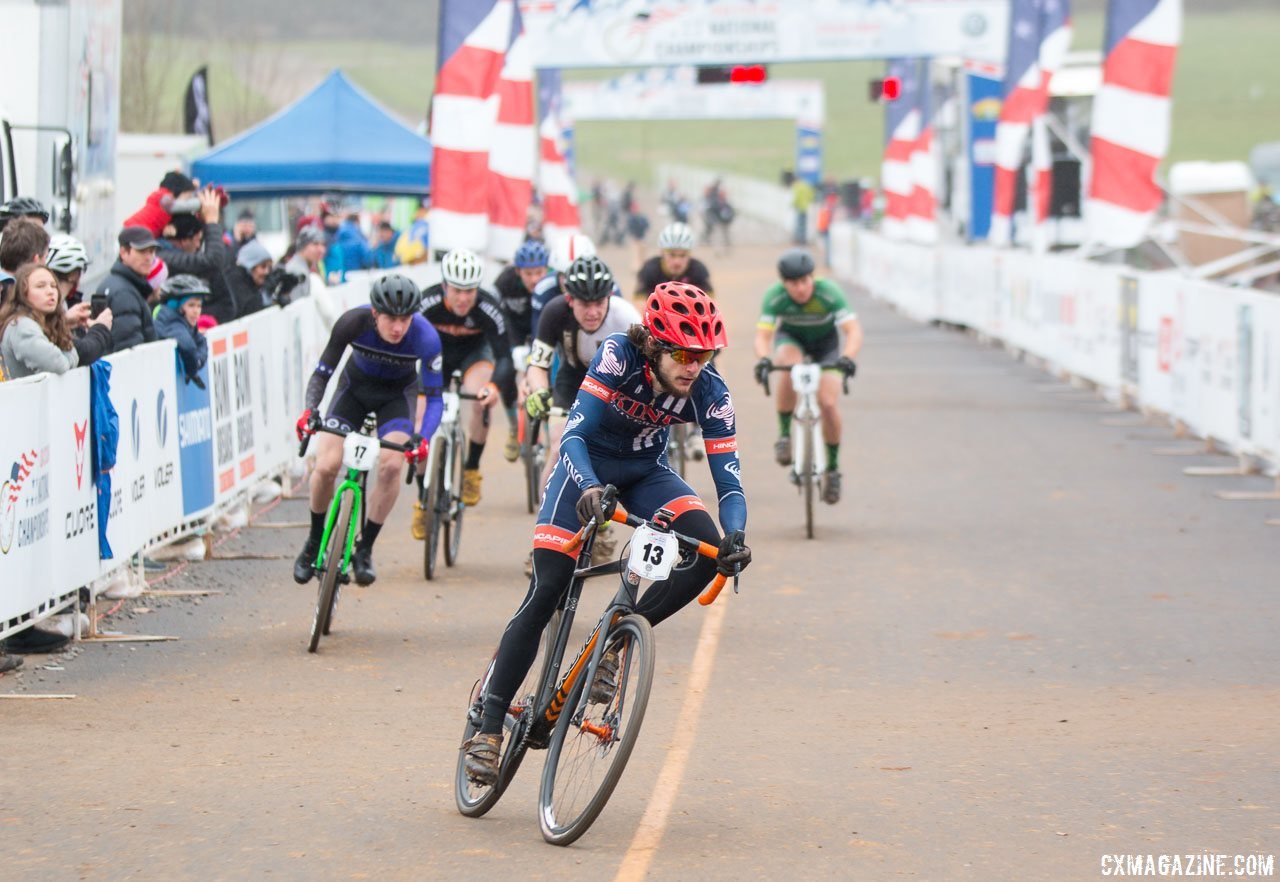 King University takes the race on to the course from the start straight. 2016 National Championships. © Cyclocross Magazine