The Elite Women on course today at NBX. © Meg McMahon

by Cindy Brennan with interviews by Andrew Reimann

Rain fell on bayside Goddard Park in Warwick, RI today as racers took to the course for the first day of the NBX Gran Prix, the seventh round of the Verge New England Cyclocross Series presented by Stan’s NoTubes and Cycle-Smart. As the penultimate round of the 2014 Verge NECX Series, races in each of the fourteen Series categories were especially hard-fought. New England is the premier region for American cyclocross, with top-notch races nearly every weekend; however, NBX is an adored favorite for racers and fans alike. Challenging, rooty trails through wooded sections lead into long beach runs and fast, sandy turns, giving the race character that makes it as fun to race as to spectate. Noble, Bruno Roy, Anthony, and White led for most of the race. © Meg McMahon

Ellen Noble (JAM Fund/NCC), who is both overall Elite Women’s Series leader and U23 Series leader, aims to finish her amazing New England UCI season with a bang this weekend. Under a light rain, Noble took an early lead with Mo Bruno Roy (Bob’s Red Mill p/b Seven Cycles) on her wheel. Right behind them, Crystal Anthony (Optum p/b Kelly Benefit Strategies) and Libby White (UVM Cycling) fought to catch the two leaders and succeeded. Behind the leaders, the chase never quite got organized: Laurel Rathbun (Raleigh/Clement) and Cassandra Maximenko (Rare Vos/Van Dessel/PowerBar) both rode alone for most of the race. Chris Birch (JAM Fund/NCC) had been chasing in fourth but fell back as well. Safe from any threat from a chase, the lead group began to play cat-and-mouse in the final laps. The leaders fly through the log barriers. © Meg McMahon

Noble pressured the group first, trying to gain a gap; as the group caught her and reorganized, Anthony launched an attack through a tricky section of wet, slick roots. Noble and White charged to bring Anthony back. A steadier rain fell, making the challenging course even slicker. Anthony’s lead over Noble and White was so narrow that any slight bobble in the final challenging turns could compromise her lead, but Anthony rode clean to take the win. Noble claimed second, White third, and Bruno Roy fourth. Behind the lead group, Rathbun finished fifth, Maximenko sixth, and Birch seventh.

Noble’s second place finish solidified her series lead in both the overall Elite Women’s and U23 categories.

Curtis White Takes the Right Line for the Win Timmerman and Clark at the helm of the race. © Meg McMahon

Werner and Timmerman attacked the group, gaining a few seconds’ gap, but the group of five were all together with one lap to go. A driving rain fell on the course as the racers headed into their final lap. Clark fell a few seconds behind the group, leaving four men standing. White attacked, only just barely able to gain a lead of a few bike lengths as Timmerman and Werner chased hard. White led into the final turns and was able to hold his advantage to the line. White claimed the victory, Timmerman second, and Werner third. Lindine crossed the line in fourth and Clark in fifth. Adam Myerson leads Lindine through the beach section, both riders had great rides on day one. © Meg McMahon

White’s win moved him into the U23 Series lead, as Timmerman’s second place finish was enough to hang on to the overall Elite Men’s lead. 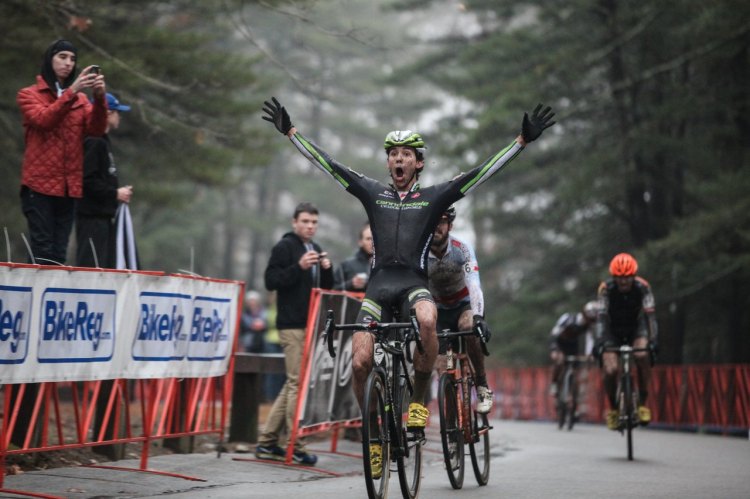 Day two of the NBX Gran Prix of Cyclocross  tomorrow will be the finale of the 2014 Verge New England Cyclocross Series. The final battles in all Series categories promise to deliver the most exciting races of the season. Watch the Elite races live on gnarlymonkey.com and follow live tweets of the race at @VergeNECXS. The hashtag for the weekend is #NBXcx.