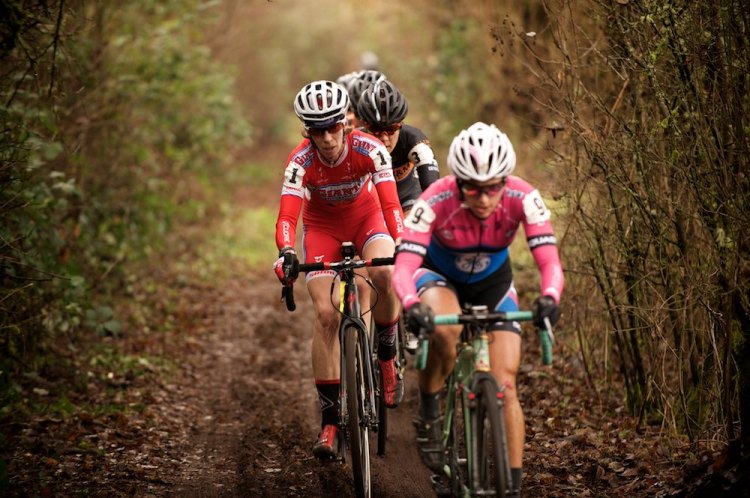 Rachel Lloyd (CALIFORNIA GIANT CYCLING) was glad to let the other riders work as she bided her time for an attack. © Matthew J. Clark/StraightEIGHTFilms.com

Day two of the Waves for Water Cyclocross Collaboration took place at Ft Steliacoom State
Park in Lakewood, Washington. The fast, tacky course featured one big climb, with fast gravel
descent. Both the men’s and women’s race saw large groups racing together into the final
moments. Cal-Giant’s Rachel Lloyd took her second win of the weekend, while Raleigh Clement’s
Ben Berden won in a group sprint down the long final stretch. Ben Berden (RALEIGH/CLEMENT) steps up to take a pull up front mid race as if to test the waters of the select group he was in for most of the race. © Matthew J. Clark/StraightEIGHTFilms.com

The men’s race saw large group racing for the first half of the race. Several riders attempted to
animate the race, but it was hard to get away on what proved to be a draft heavy course. It
wasn’t until the final few laps that the group of twelve was reduced to five. A group containing
yesterday’s heavies Ben Berden, Jayme Driscoll (Raleigh-Clement) and Cal-Giant’s Logan
Owen, who was hoping to make up for yesterday. A group of five, that included Berden, Owen, Driscoll, Giant’s Adam Craig, and Shawn Milne
(Boulder Cycle Sport/ Yogaglo) lead the last lap. Driscoll attacked heading into course’s final
portion. He couldn’t get away. In the end Berden opened it up on the long finish straight, using
his biggest gear to take the win. Logan Owen pounded the bars as he rolled across the line just
a bit behind the hard charging Belgian. Shawn Milne (Boulder Cycle Sport/ Yogaglo) took third.
The woman’s race saw similar road tactics play out. Yesterday’s winner Rachel Lloyd (CalGiant)
sat in for the a majority of the race. Letting Amanda Miller (Boulder Cycle Sport/ Yogaglo)
and Courtnenay McFadden (GE Capital American Classic) take over a majority of the pace
setting. In the early laps, Courtney McFadden (GE CAPITAL/AMERICAN CLASSICS) lead a select group. Even with a minor wreck, she stayed with the leaders.© Matthew J. Clark/StraightEIGHTFilms.com

The Cal-Giant waited till the final lap to launch her attack, using the course’s one climb to put a
gap into her competitors. She kept on the gas and gave herself more daylight and plenty of time
to post up as she crossed the line. Miller came across the line second, with Local Courtnenay
McFadden finishing third. A different course, but similar result to yesterday’s race.

USAC Pro CX
The 2014/15 USA Cycling Pro CX calendar includes all the UCI-sanctioned Category 1 and
Category 2 cyclocross races in the US. This 44-race calendar begins in September and runs
through January. The overall winners of the Pro CX calendar split a $20,000 purse for both
Elite Men and Elite Women.

Waves For Water
Waves For Water is a non-profit organization with a simple mission: “Get clean water to every
single person who needs it.” To date, Waves For Water has helped provide access to clean
water to over 7,500,000 people. For more information on Waves For Water, visit
www.wavesforwater.org.