Ellwood leads the start of the U23 race. US Open of Cyclocross UCI C2 Day 2. © Cathy Fegan Kim / Cyclocross Magazine

Day 2 of the U.S. Open of Cyclocross swapped out Day 1’s UCI Junior Men’s race for a UCI U23 Men’s race, and 2016 Junior National Champion Gage Hecht (Alpha Bicycles/Vista Subaru) capitalized on the opportunity to race for U23 UCI points near home, taking the victory ahead of Grant Ellwood (Boulder Cycle Sport / YogaGlo). Hecht wins his first U23 race at the US Open of Cyclocross Day 2. © Cathy Fegan Kim / Cyclocross Magazine

On the women’s side, Melinda McCutcheon (DNA-Cotton Sox) made up for a her mid-race crash on Day 1 that cost her a chance to fight for the win, taking the holeshot and never straying from the front. McCutcheon gets the holeshot in dusty conditions, and was the first to cross the finish on the last lap as well. US Open of Cyclocross UCI C2 Day 2. © Cathy Fegan Kim / Cyclocross Magazine

McCutcheon would trade blows with Day 1 winner Amanda Miller (Boulder Cycle Sport / YogaGlo), until making a decisive attack with two laps to go, finding redemption for her Day 1 mishaps with a 18 second victory.

The Argentinian Sofia Gomez Villafane, Tenspeed Hero had another strong outing ahead of the Pan-American championships at the end of the month, securing third today. Emily Kachorek (Squid) and Melissa Barker (EVOL Elite racing) closed out the top five of this UCI Elite Women’s C2 racing. 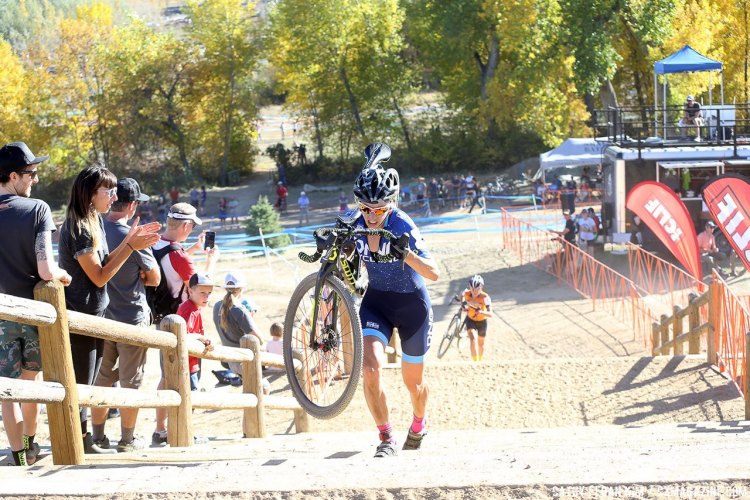 McCutcheon running away from Miller at the US Open of Cyclocross UCI C2 Day 2. © Cathy Fegan Kim / Cyclocross Magazine

“It was really hot and really hard. Super fun course, the hill on the backside was brutal” – Melinda McCutcheon

In the men’s race, it was a repeat winner in Yannick Eckmann. On Day 2, Eckmann missed the power of the Day 1 three-man team time trial that helped launch him to the win. Ellwood was in the U23 race, while teammate Krughoff had an off day. Instead, he found company with Troy Wells (Clif Bar) and Stephen Ettinger (Ridebiker p/b Focus), and the three set off on their own team time trial. Ettinger was the first to face, while behind, the ageless, four-time National Champion, 40-year-old Jonathan Page (Fuji) was just warming up. Page found his second wind, passing off racer by racer, and eventually passing everyone but Eckmann. Behind Page and Eckmann, several racers took big leaps from their Day 1 positions by the end of Day 2. Wells hopped five spots up to third on Day 2, while Ettinger won Most Improved on the day, moving from 21st on Day 1 to 4th.