In the most anticipated race of the 2020/2021 cyclocross season, Tom Pidcock (Trinity Racing), Mathieu van der Poel (Alpecin Fenix) and Wout van Aert (Jumbo Visma) did their part to overdeliver excitement and drama at the Citadel of Namur.

Van der Poel, coming off a rare defeat at Superprestige Gavere, has looked human in his return, even when victorious. Winning half your races is impressive for any pro racer, except for the king of cyclocross, who lost only one race the entire season last year.

Pidcock promised to climb above his dominant ride in Gavere, on a course that suits him. The young Brit put on a show in 2019, with a podium finish behind the epic Toon Aerts and Van der Poel battle.

Meanwhile, Van Aert and road cycling fans were impatiently waiting for the return of the head-to-head battle of the two multi-discipline superstars. The last time the two lined up against each other, on pavement and cobbles, it came down to inches. Could Toon Aerts (Telenet Baloise Lions) overcome flashbacks of rib injuries and repeat his performance in last season’s race of the year?

When the lights turned green, typical fast starter Van der Poel, starting from the second row, was quickly swarmed, and soon it was the World Cup leader’s jersey in Vanthourenhout at the front. Pidcock put everyone else on the defensive for the second week in a row. 2020 UCI Cyclocross World Cup, Elite Men. © Cyclocross Magazine

The white and red jersey wearer soon was seeing red, as Pidcock took to the front and showed his win in Gavere was no fluke. He put the pressure on the chasers, and it started to show. Van der Poel slipped out in a root-filled corner, Van Aert dismounted early in a tricky drop, and Vanthourenhout’s tire couldn’t take the pressure. Fortunately for the series leader, it was just before the pits.

Van der Poel didn’t look like his dominant self. After his brief slip in the corner, the World Champ was content to sit on wheels while Pidcock pulled away. Sadly, Iserbyt could never contest the win. The Belgian suffered a broken chain on the opening stretch and was left running for a new bike. He would finish 31st and be pulled.

Pidcock looked determined to crack his rivals. While the three behind routinely went in for bike changes each lap, Pidock pedaled past and extend his lead. It appeared to be a successful strategy, as with three laps to go, he had stretched his lead to 11 seconds. Tom Pidcock had a fast start and led most of the race. 2020 UCI Cyclocross World Cup, Elite Men. © Cyclocross Magazine

Could the Brit make it two weeks in a row? Vanthourenhout was the first chaser to pop, leaving rivals Van Aert and Van der Poel the chance to work together and bring back victory. 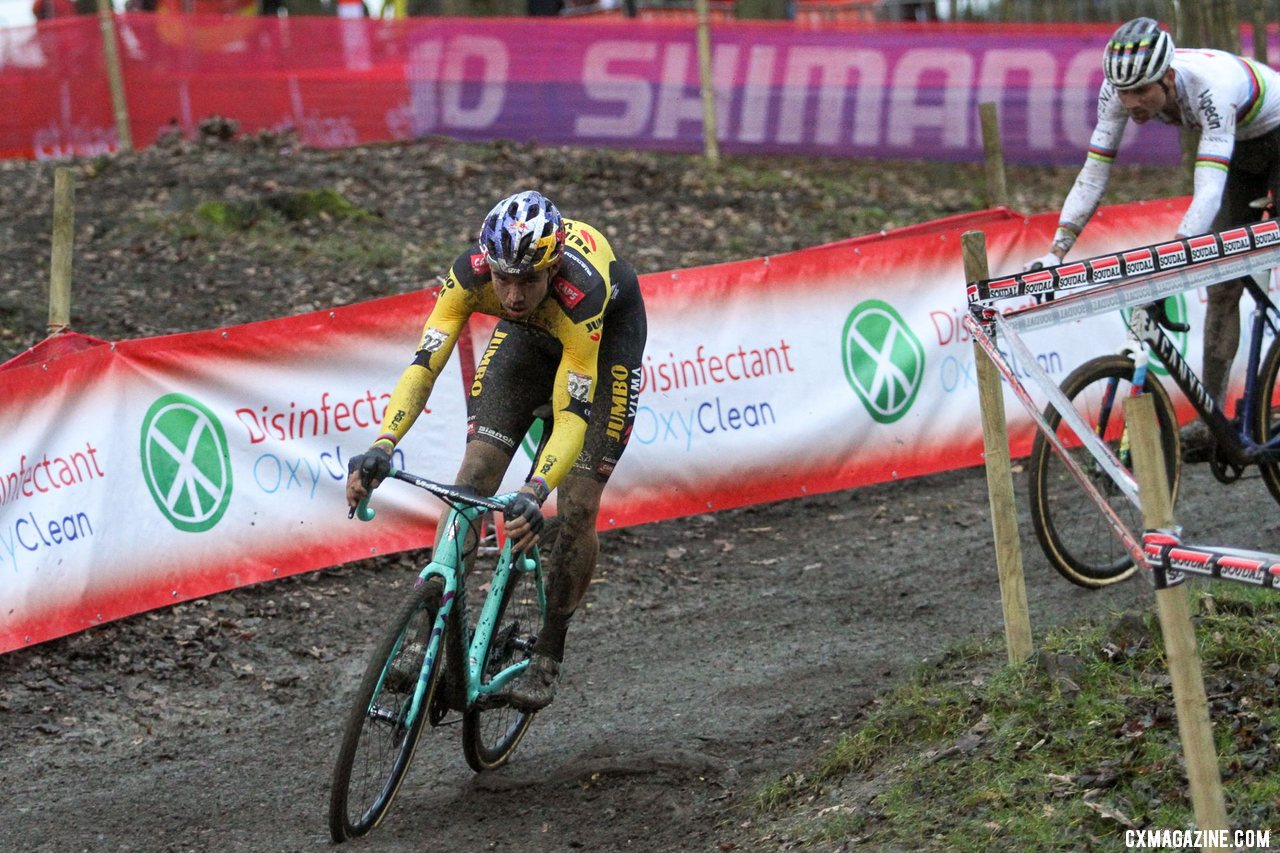 Van Aert kept his rival on the defensive. Riding past a running Van der Poel, the Belgian looked the stronger of the two, and ready to avenge his Flanders loss. Suddenly, a riding Pidcock showed that staying on the bike is not always faster. As the Brit pounded the pedals up a tricky climb, Van Aert and Van der Poel made the connection on foot.

On the penultimate long dirt climb before the ramped right-hand carpeted turn, Van der Poel took to the front, accelerated up the red carpet, and gapped his companions.

Van Aert tried to match the effort, but Pidcock was caught overgeared and outmatched on the penultimate lap. The Brit would lose 11 seconds on the eighth lap and see his chances of victory fade away as the two superstars prepared for another sequel in their storybook rivalry.

The World Champ was finally in control, and had the daylight he needed. Van Aert was deep in déjà vu in second, while Pidcock was also back in a familiar position, riding to third and watching a victorious Van der Poel for the second year in a row. It took everything he had, but Van der Poel is back on top. 2020 UCI Cyclocross World Cup, Elite Men. © Cyclocross Magazine Next post Lee Waldman: Looking Forward to Healing in 2021