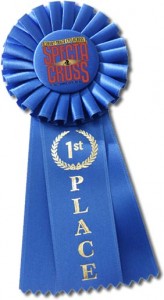 Organizers of the New Jersey State Fair SpectaCross have announced details of no fewer than three clinics that will take place in conjunction with the race on August 6-7. SpectaCross may take place in the middle of the summer, but organizers see the date as an important bridge to the traditional autumn cyclocross season. “For new ‘crossers, we’re a gateway to the hardcore stuff,” laughs promoter Ken Getchell. “That’s why we’ve upgraded our clinic program for this year.  We’re going to have a standard clinic, a women’s-only clinic and a cyclocross “boot camp” that lasts four-and-a-half-hours. And all three clinics can be entered from the same BikeReg page as the races.”

Realizing that the first weekend in August is an ideal time to get new riders up to speed, literally, before the traditional start of cyclocross season just six weeks later, the New Jersey State Fair SpectaCross has teamed up with Cycle-Smart coach Alec Donahue, a UCI race winner and the defending Chip Baker Trophy Champion at SpectaCross. Donahue, who coaches fulltime, is bringing three additional coaching assistants to help him conduct the three clinics. “Speaking to last year’s clinic participants,” said Getchell, “it became apparent that many of them were counting almost entirely on the SpectaCross clinic and race weekend to point them in the right direction for their first season of cyclocross racing.  It makes a lot of sense, really, because a clinic in August gives you five or six weeks to correct your mistakes, and time to practice what you’ve learned, before being thrown to the wolves in one of those 100-rider novice races.”

Donahue, who is also a former mountain bike National Champion, majored in Biology at Bates College and interned in orthopedic surgery and sports medicine. He understands personally what it’s like to balance work or school with racing, as well as how to train and compete as a pro. Frances Morrison will be running the women’s-only clinic and assisting in the Boot Camp. She is an Elite road and cyclocross racer on the Wheelhouse Racing Team. She cut her teeth in the Eastern collegiate cycling scene and from there migrated naturally into the dirt, mud and ridiculousness that is cyclocross. She enjoys cooking strange foods and will no doubt be on the prowl for new ingredients in the Fair’s exhibition areas throughout the weekend. Like Frances, Jeremy Durrin is a native of Fitchburg MA, home of the Fitchburg-Longsjo stage race. Jeremy is an Elite level cyclocross racer who also competes as a Cat 1 on the road.  As a Cycle-Smart client he was encouraged to try his luck at cyclocross, where he quickly moved up to the Elite level.  Jeremy is the assistant coach for the UMass bike racing team and has served as that program’s director for the past two years. Also assisting with the clinics is Beth Mason, another Elite racer who knows how to balance racing with life’s responsibilities. Mason is an Elite level racer, mother of two and a Major in the U.S. Army who has just recently returned from a tour of duty in Iraq. Mason is also a Physical Therapist and Retul-certified bike fitting expert.

The New Jersey State Fair SpectaCross takes place on Friday and Saturday, August 6-7, and is the featured outdoor entertainment event of the opening two days of the New Jersey State Fair. Taking place in and around the 5,000 seat Monster Truck/Tractor Pull arena (which is irrigated to guarantee grin-inducing muddy conditions), last year’s race attracted entries from 13 states and three foreign countries. For more information on the race weekend, which also includes the Revolution Wheelworks World Final of PokerCross and the Cyclocross Magazine Friday Night Sprints, see www.SpectaCross.com.  Online Pre-Registration is available exclusively on BikeReg.com. 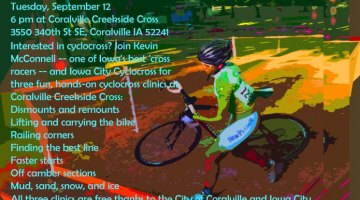 Got a Free ’Cross Clinic? We’ll Help Spread the Word