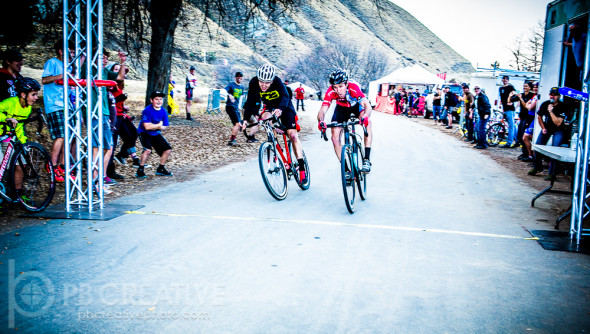 BAKERSFIELD, Calif. – Sudden death overtime is something that just does not happen in the sport of cyclocross. But after a full day of California State Championship racing during the first weekend of 2014, there it was. The 4th Annual Nor Cal vs. So Cal Showdown at Hart Park in Bakersfield produced one of the most improbable conclusions anyone could imagine.

Before we go there, let’s examine how we got there. The first day of racing at this challenging, Euro-like venue served as a splendid warmup for the title fight. It was also the second round of the SoCal Cross Fever Series. An enthusiastic ensemble of Northern California CX fanatics saw fit to make the drive and enjoy some fun in the late-season sun, not to mention defend their crown from last year. With State Champion jerseys and bragging rights on the line, intensity was palpably turned up a couple of notches the next day, With the course now running in the opposite direction, it was an evenly matched contest across the board in every class.

SoCal’s cause was helped by the performance of Amanda Nauman (SDG/Felt/IRT/SPY) in women’s 1-4. Nauman slipped past Gomez-Villafane and Kachorek within the first half lap and quickly opened a comfortable gap that would shrink only a little before the finish. 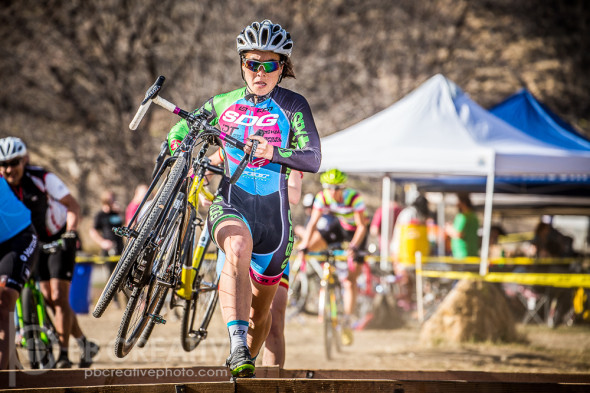 As Nauman explained, “On the last two laps I was taking the run-ups a little bit easier because they just destroy your legs, and Carolina was making up so much time on me there. She was catching up. It was a good race because she was still there and I could still see her. It was fun. I just love this course; there’s so much variety.”

“Amanda has power, so she was getting away on the flats,” said Gomez-Villafane. “I was sort of catching up on the runs and the technical stuff, but she made a gap and maintained it.” As the final race of the day — men’s 1-4 — was staging, it was announced that SoCal had built a slim nine-point lead over NorCal.

Hometown hero Gareth Feldstein (Ritte CX Team) led the charge up the paved start/finish straight, and into turn one. He kept the pressure on during the first lap and opened some daylight, but was joined at the front by five chasers, including Ortenblad, Walton Brush (MASH/Hed/Oakley) and Jason Siegle (SDG/Felt/IRT/SPY).

This group of six left everyone else well behind during the next two laps, then started coming apart with five to go. Only Ortenblad, Brush and Siegle remained, and Siegle’s chances were crushed when he slid out and down a lap later.

The surprising Brush, a native of Berkeley via Portland, Oregon, led rising star Ortenblad for much of the last two laps. The crowd was waiting for an inevitable coup de grace from the defending champ, but it never came. At the moment of truth, Brush crossed the line with a bike-length’s lead.

Ortenblad admitted that he had underestimated Brush, even though they race together regularly. “There’s a roller before you drop into the long drag to the finish,” he said. “Walton jumped me there but I was ready for it. He got a bigger gap than I anticipated and then I spun out my gearing. He played it smart. I think I got a little cocky. I thought for sure it would be no problem to take him. I was too confident; he’s been racing really well this year.” Brush appeared to be somewhat shell-shocked afterward. “The race was fun today. I didn’t know anyone except Tobin. He’s faster than me so I just tried to stay near the front. When it started to split apart I put some effort out and Tobin and I got away. Coming into the end I knew he was all around better than I was but I thought maybe I could sprint better. I kind of played it safe riding the front and got a gap early and stayed with it till the line. This is the first race this season that it’s played out to my advantage.”

Siegle finished a lonely third, while Jerome Townsend (BikeReg.com/Cannondale) — all the way from Princeton, Massachusetts — and McGovern completed the podium. 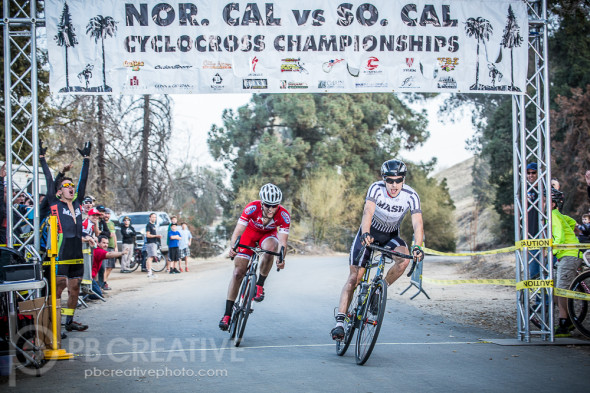 Now all eyes were turned to the scorekeeper. After a few moments the verdict was reached: the Nor Cal vs. So Cal showdown had ended in a points tie: 338 to 338!

Race Director Sam Ames and the crowd were stunned, especially when it was announced that no tiebreaker had been instituted for this highly unlikely event. After a fair amount of deliberation as well as a touch of desperation, the decision was made to choose one man from each region to sprint about a hundred yards against each other on the pavement, winner take all.

Ortenblad and Feldstein were cajoled back onto their bikes, and in a blur of last-second excitement, Feldstein snapped across the finish tape half a wheel ahead of Ortenblad. Sudden death indeed, there simply is nothing else like cyclocross.

Following the break for the National Championships in Boulder, Colorado, two more CX races remain on the SoCal calendar. The final rounds of the Cross Fever series take place at Lake Casitas on January 19 and Los Angeles January 26. For more information and to stay connected to all SoCalCross Prestige Series activities, be sure to bookmark SoCalCross.org.