Hundreds of cycling fans and ‘cross luminaries gathered at Boulder Cycle Sport on January 10 for the SRAM Pro Night and Amy D. Foundation Fundraiser. As well as raising $8,000 for the Amy D. Foundation, the evening hosted the inductions into the Woolly Mammoth Society, the de-facto cyclocross Hall of Fame. Dave Towle emceed the evening, with Cyclocross Magazine’s Molly Hurford presenting the awards.

This year’s inductees include Providence Cyclocross Festival’s own Richard Fries and Louisville World’s advocate, Joan Hanscom, two of the loudest voices in the chorus singing for internationalization of the sport, along with racers Jeremy Powers and Amy Dombroski.

Fries’ has played an integral role in the organization of six national cyclocross championships and is one of the ’cross world’s most in demand announcers, having provided the English language commentary for the last four World Championships, 12 of the last 14 National Championships and countless more. In addition, Fries is currently leading the charge to bring the Cyclocross World Cup opening round to the Roger Williams Park in Providence, Rhode Island in 2015.

Fries was honored by the recognition from his cycling peers, “”When I looked at the names of the prior inductees—Katie Compton, Tim Johnson, Jonathan Page, Alison Dunlap, and other legends of American cyclocross—I had just one thought: ‘What the hell am I doing here’. I am dearly appreciative of this recognition by the prior inductees.”

Joan Hanscom was inducted along with Fries, for her tireless promotion of the sport as the long-time owner of the USGP and for leading the charge to bring the World Championships to Louisville, KY in 2013.

Jeremy Powers was also inducted, noting his illustrious ’cross career and his involvement in growing the ‘cross base. In addition to his athletic accomplishments, Powers profiles life on the ’cross circuit with his remarkable web series, Behind the Barriers. Powers is also one of the founders of the JAM Fund, the development program he founded along with Al Donahue and Mukunda Feldman.

In addition to raising funds for the Amy D. Foundation, the evening also served to honor her induction into the Society of the Woolly Mammoth. Dombroski embodied a matured American ’cross, building on her domestic racing history to become one of the first Americans to race on a European squad. Despite her tragic death in a training accident in October, 2013, Dombroski continues to inspire through the foundation set up in her name.

Commenting on the impact of the evening’s award, Fries noted, “I think it is fascinating how American cyclocross grew because of both great athletes and great supporters, both of which made enormous sacrifices for a beloved sport that went ignored for so long. The cyclocross community is standing on some big shoulders today. And I have to say the view is a lot better up here.” 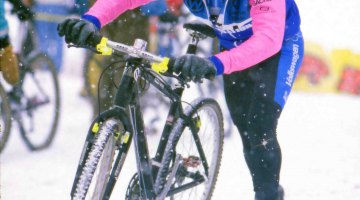