Day 2 of Supercross Cup at Rockland Community College in Suffern, N.Y. was cold, windy, snowy, and slick. The off-cambers were far more treacherous than Day 1, having endured rain and snow overnight. For the Elite Women in the UCI Category 2 (C2) race, Maghalie Rochette (Clif Pro Team) put in another dominating performance to solo to victory one minute and forty-five seconds ahead of second-place Crystal Anthony (Maxxis-Shimano Pro Cyclocross). For the Elite Men, the C2 slugfest would come down to another sprint finish, with Curtis White (Cannondale p/b Cyclocrossworld.com) taking the win over Jeremy Martin (Focus CX Canada) in the final turns.

Rochette Dominates and Doubles Down

The Quebec native would take her second win of the weekend, controlling the race from the beginning, as she did Saturday. “Cassie Maximenko got the hole shot and I saw she took a line and I could see a little bit of grass on the left of her, so I went in the grass and I was able to create a little gap. I think it bunched up behind me, so I just kept pedaling and opened a little gap,” said Rochette. “My only strategy was to keep it clean, trying to keep my momentum along the whole race. It worked out, so it is good. It was challenging, super fun course.” Maghalie Rochette dominated her competition on Day 2 of the 2016 Supercross Cup. © Chris McIntosh

When asked about her upcoming race plans after her successful streak, Rochette noted “I’ve been kind of going since the beginning of mountain bike season, and that was early March. So I’m taking little break now in the hope of building fitness again and being fresh for Worlds.” 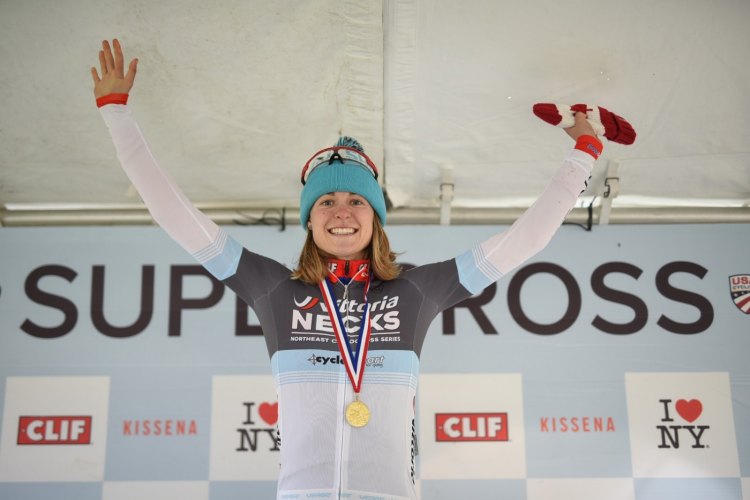 Big smiles from Maghalie Rochette on the top step of the podium. © Chris McIntosh

Rebecca Fahringer (Amy D Foundation) would repeat with another third place finish. “It ended up being the same podium as yesterday, but it was a much different race. Maghalie was gone from the start, so that was exciting. There was no move, she got the hole shot, kept going and never slowed down. Frankly, I don’t know how it happened. She’s just mega-fit and has great english in the mud. Crystal, I think, broke a chain or had some sort of a mechanical on the start.”

After being out-sprinted yesterday, White was on a mission from the beginning. He wasted no time stringing out the field in the extremely windy conditions. The win was his sixth of the year on the USA Cycling Pro Cyclocross Calendar. Curtis White was not to be denied on Day 2 of the 2016 Supercross Cup. © Chris McIntosh

“It was a solid weekend. I love racing in New York. New York always brings out the best in the weather,” White, a New York resident, laughed. “I was pretty motivated after yesterday. I knew these conditions (wind, cold) suited me well. I felt like I was riding the course really well in the first half. I got a really solid gap, but what worked for the first half of the race didn’t work for the second half. The course changed so much.”

“Jeremy (Martin) came up pretty quick. I wanted to save something for the finish, but I let him take the lead a little bit and just watched him take some lines. There were ruts over there in the second half that weren’t there the first half. I didn’t have the benefit of following other riders (in the first half) and seeing all the lines.” As the course conditions changed, White found himself off the bike more frequently. “It came down to the second to last corner. We both happened to sprint into it as fast as we could, and then dismount, and having to run it. I think it was just whoever led in the last corner.”

Saturday’s winner of the Elite Men’s race, Jack Kisseberth (JAM/NCC), finished 40 seconds behind White for third place. Of the 47 riders who started the men’s race, only 16 finished on the lead lap.

Day 2 of Supercross Cup made the sixth day of competition for the Vittoria Northeast Cyclocross Series presented by Cycle-Smart, the only UCI series in the U.S. The Vittoria Northeast Cyclocross Series presented by Cycle-Smart will wrap up in Warwick, R.I. the weekend of December 3-4 at the NBX Gran Prix of ‘Cross. Both days of racing in R.I. feature UCI C2 races that are part of Pro CX. That same weekend will see two additional events across the U.S. for Pro CX, with C2 races at Major Taylor ‘Cross Cup in Indianapolis, Ind., and C1 and C2 races at Ruts N’ Guts in Broken Arrow, Okla.