Our favorite Cyclocross Apprentice had a memorable trip to Italy last year for the World Cup. As we near the start of the Val di Sole World Cup once again, we’re revisiting her column from the race in the snow in 2021. This one checks both the adventure and travel boxes.

I’m going to be honest. There really were no downsides to leaving Belgium for a visit to the Italian Alps in December.

My motivations were race-based. The UCI debuted a new, shall we say, “environment,” for World Cup cyclocross, holding the first-ever World Cup intentionally on snow. The idea was to showcase cyclocross in a winter environment to make a case for the discipline’s inclusion in the Olympics. 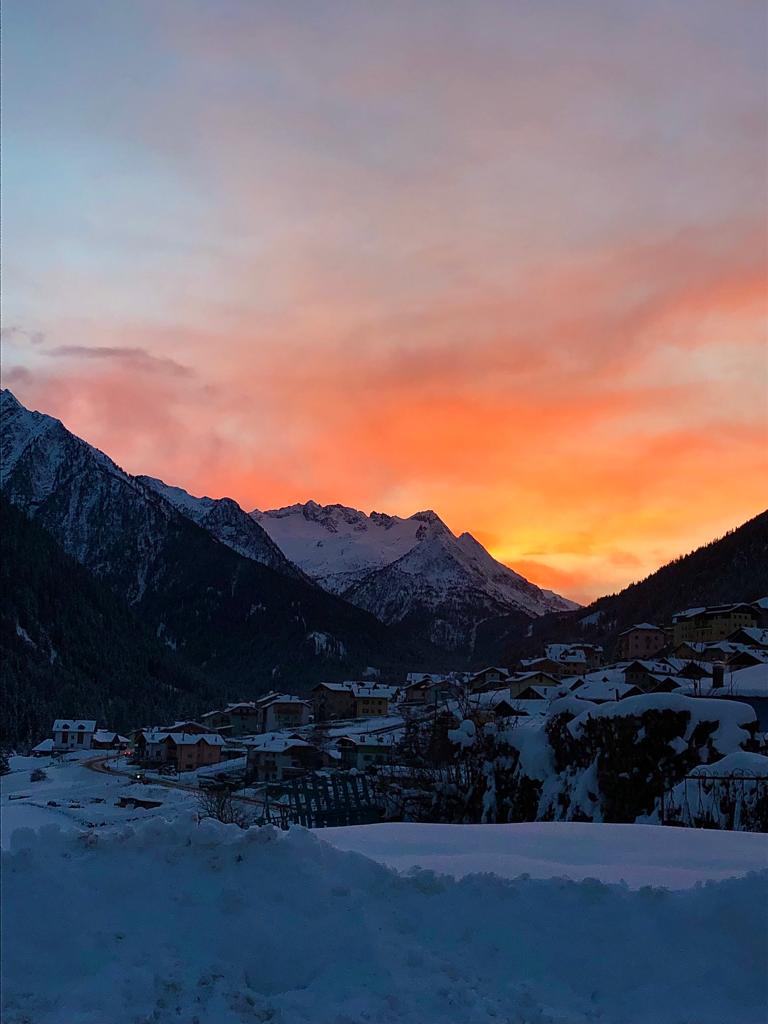 This World Cup Val di Sole first appeared on the calendar in December 2020 but became a pandemic cancellation.

I wasn’t sure that the idea of “snow-cross” was legit and would truly appear on this year’s calendar…or if it was a grand idea that would be forgotten!  This summer, when I saw it listed…well, it was a fitting trade-off for missing Nationals (again)!

There’s a bit of a backstory to my enthusiasm for on-snow cyclocross. First, there is my history: I started “seriously” competing as an alpine skier at age 7. My childhood dreams involved racing downhill in the Alps. As a teen, I switched to cross-country skiing. In 2008, I retired from that sport after failing to make the 2006 Winter Olympics in Torino, Italy. Ironically, I got my first-ever passport in 2005 before the Games, hoping I would need it for Italy. I never actually used that passport until my first trip to Belgium. 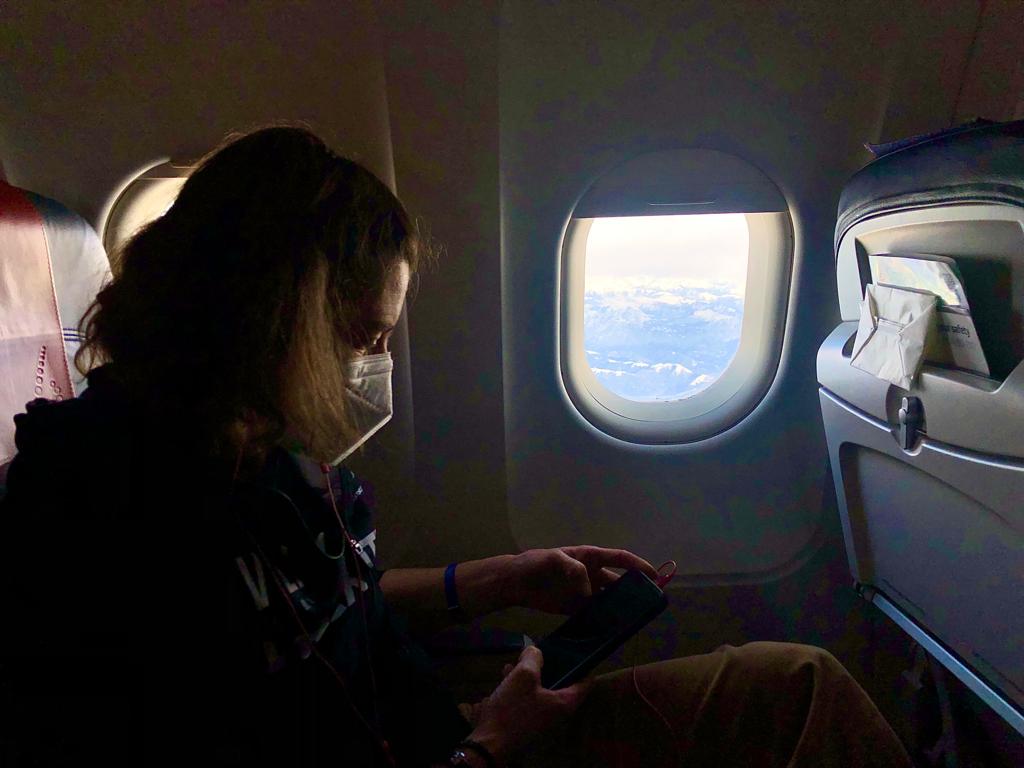 You can see the alps out the window.

I’m also from Minneapolis. Yup, our winters are both bitter cold and snowy. I’ve spent plenty of time honing my “snow cross” skills out of necessity. No surprise: my best-ever results have come in the snow, from winning my age group at Nationals in Madison and at 2016 Nationals in Asheville to runner-up in singlespeed in Hartford. 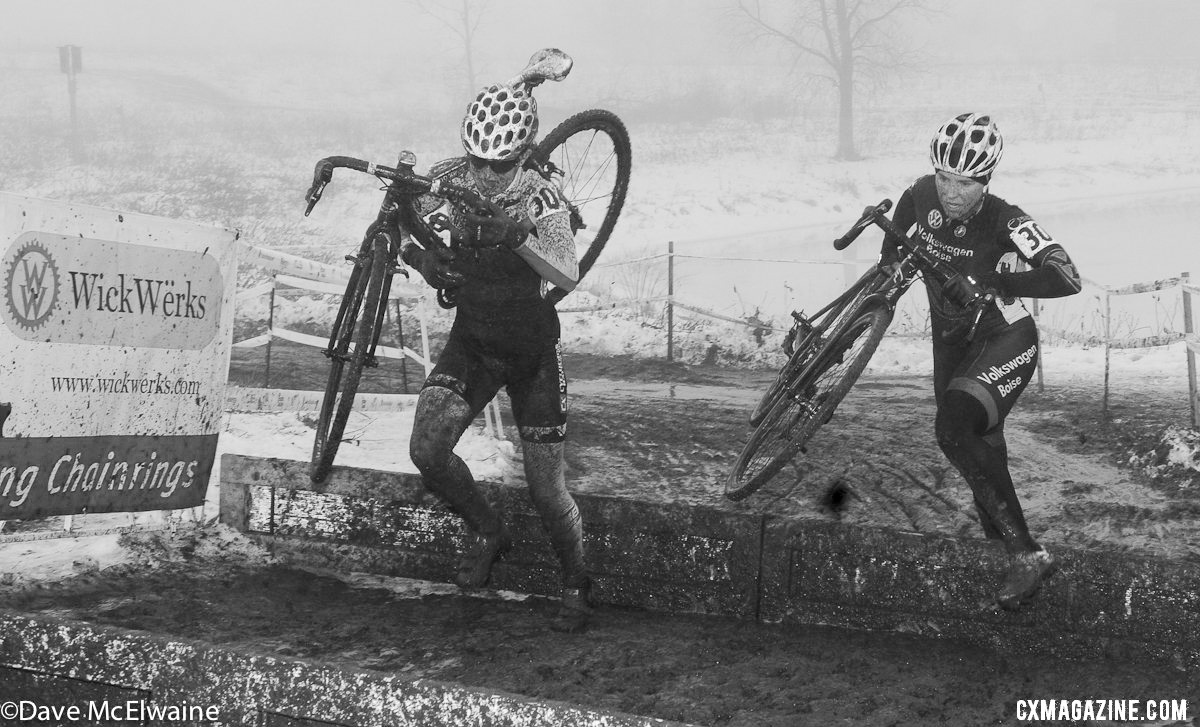 A life on snow helps me to “read snow.” Sounds silly, but are you a cross-country skier? Can you predict what side of the track will be firmer based on where the groomer passed first? I’m good at predicting how snow will transform at various temperatures. Who knew this would come in handy?

VeloRevolution – WP Cycles to the Alps!

My teammate Allison is always game to try something new: a perhaps once-in-lifetime World Cup in the snow? Why not?

Our mechanic, Denis D’Hondt agreed to drive the truck and bikes, even though snow-covered passes are not his forte. A friend and French Canadian Matis Boyer joined our staff, promising to show Denis the tricks of the trade regarding cold weather. 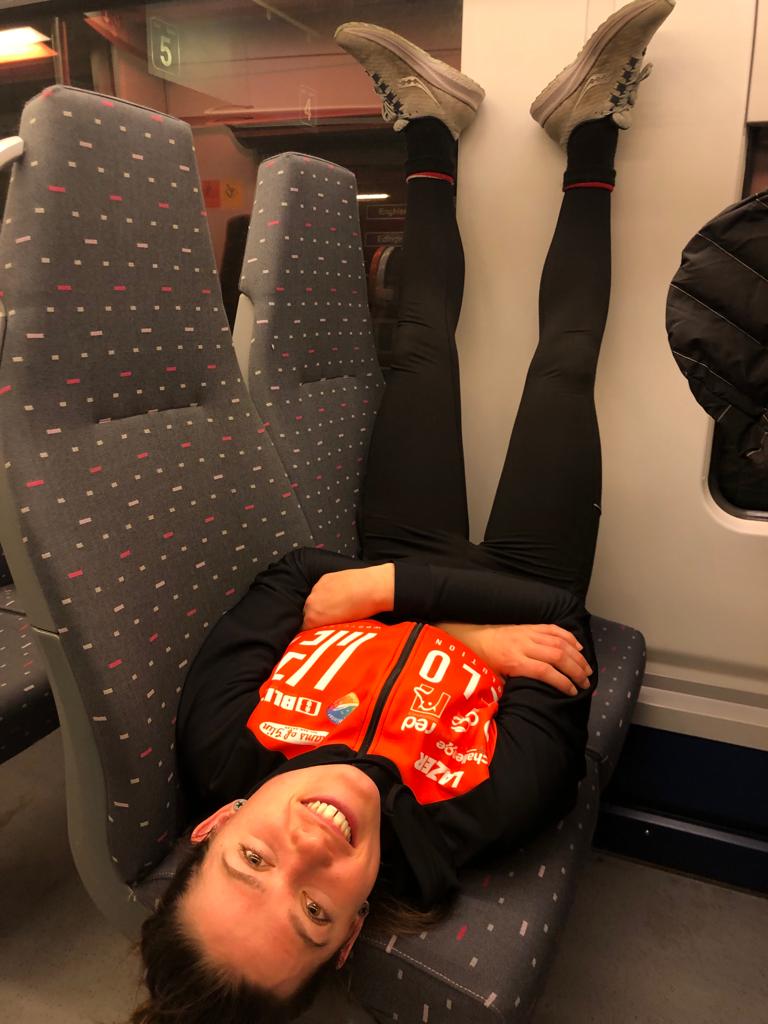 Allison recovering her legs on the train.

Much ado was made of Wout Van Aert’s travel schedule. While his travel distance was formidable, we suspect he might not have utilized the Belgian Train. Nor did he likely drive white-knuckled over the alps in a small, two-wheel-drive rental car. (It’s okay Mom, we had chains in the trunk!) Wout was certainly on our minds as we walked home from the train station at 11:00 pm. (He was, after all, in Spain by that time!)

And Denis and Matis? They made it to Italy Friday morning after re-routing due to a closed pass.

As a mountain town, Vermiglio did not lack for equipment to pack and groom snow. They provided the infrastructure to create the course. However, for course design and construction, promoter Flanders Classics brought in a team of Belgian course designers beginning 10 days before the competition.

Since our bikes arrived Friday, we were able to get on course while construction was still ongoing. The biggest surprise for me was the number of Belgians on staff. (The television production crew also seemed to be Flemish.) Out on the course, I found myself calling “pas op” (a Dutch phrase meaning, “Watch out!”) when passing workers.

Frankly, you could readily identify the Belgians! They were largely underdressed for the cold and were wide-eyed watching us, the first riders on course. Mechanic Denis would agree they felt out of sorts. Before leaving Belgium, he snagged a battery-powered, heated jacket. (There are some days where three layers of flannel shirts simply won’t do!) Denis reported this was more snow than he had seen in the past 40 years of life combined. 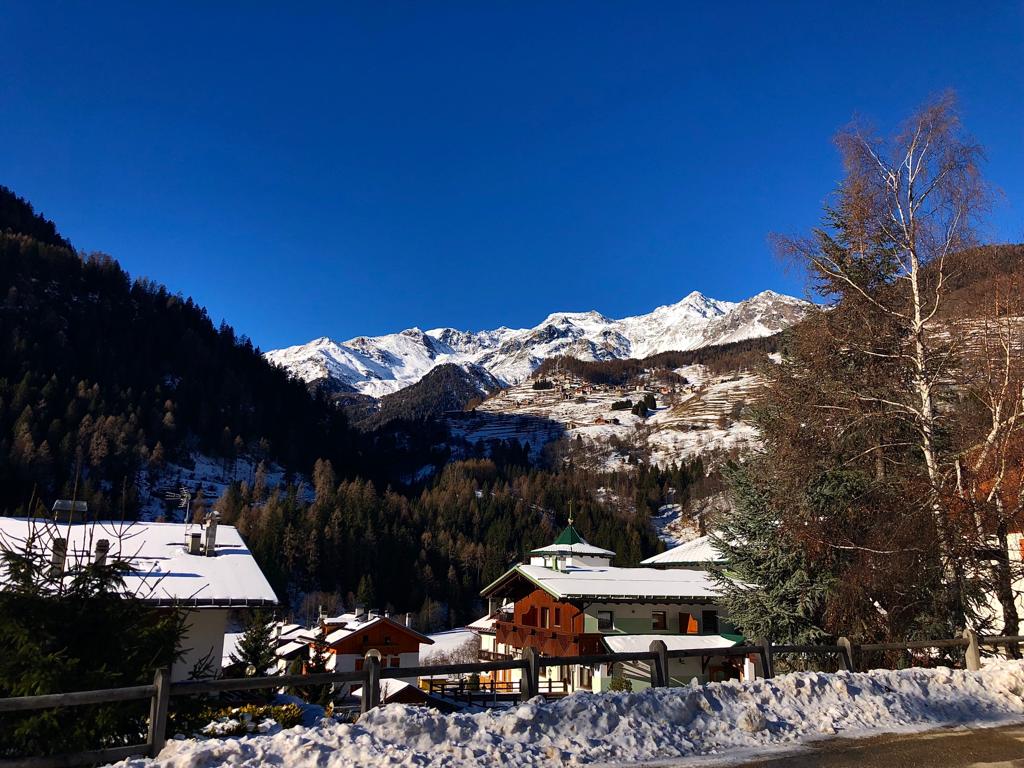 Corey’s view from the Airbnb.

For me, figuring out how they would manage the course preparation was intriguing. Would they plow, pack or groom the snow? They settled on a little of each. The pit seemed to be mostly plowed. Most of the course was lightly dragged, packed but not groomed. A few sections were perfectly groomed, a Nordic skate track was laid down. A couple of features were left minimally if at all, packed. The off-camber at the course’s highest point was left this way, as were several corners.  Evidently, the aim was to give us a mix of experiences. They did not want the entire course to be packed and potentially icy. They also aimed to create some “heavy” snow sections that would force runs or at least require lots of power. The net effect was that some sections rode like sand.

I’ve been asked a lot about tires. Based on my snow experience, I had some favorite treads in mind, yet I chose to make no assumptions and test everything.

During Friday’s ride, we discovered something interesting regarding the weather patterns at the venue. The course was deep in a valley with towering mountains surrounding it on all sides. While it was a bright sunny day, the venue was shaded by the mountains except between approximately 12:30 pm and 2:30 pm. In fact, sections of the venue never saw the sun. On Friday, Saturday, and Sunday, temperatures rose slightly above freezing in the afternoon sun, transforming the snow into slush.  Accordingly, Allison and I used our Saturday preride window to find the best tread/pressure at 1:30 pm, our Sunday start time. The answer? Challenge Grifo at 13/15 for me.

When the snow was drier and icier, I preferred Chicanes, also at very low pressure. The tread on the tire edge held on the off-cambers, while the center file tread provided a good contact patch with the snow. However, as the snow transformed, it became a little more difficult to get traction climbing. The Grifos offered a bit more climbing traction without too much traction loss on the off-cambers.

On the start line of my race, I saw only medium-tread (like Grifo) and light mud (like Baby Limus). I have not watched the men’s race, but I am told that Pidcock rode Chicanes. This makes sense not only because he is an amazing bike handler, but also because the shade hit the valley for the men’s race, sharply dropping temps and creating an icier surface.

My race? I secretly had high expectations.

It was hard to predict how the Belgians and Dutch would react to snow, low temps and travel. As it turns out, “The cream rises to the top.” For all the concerns that “snow-cross” would be too different, the results basically reflected the rankings. It seems that it remained a fair contest.

For my part, I had two very solid laps, riding into the top 25 early on, and remaining in contact with a group through lap two. Unfortunately, I slid out on the off-camber near the end of lap two, and by the time I got up, I was gapped off. With that field quality, I’m not in the position to close a gap…so joy and regrets!

The Fans and the Moka Pots

What I won’t regret is making the trip. We were part of an event that will change the sport OR be a once-in-a-lifetime one-off. Equally, I won’t forget the mountains, the sunshine, the Italian fans, and the coffee! 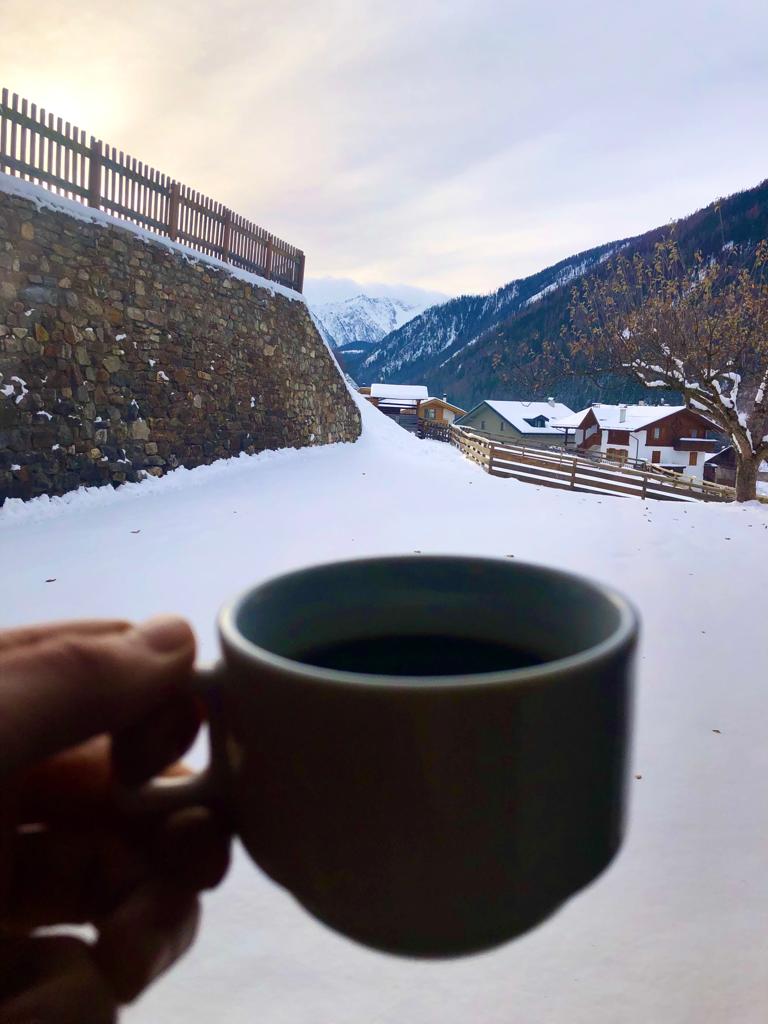 A nice cup of coffee to warm up the body.

It’s worth mentioning how different it was to race in front of the Italians. I’ve gotten so used to the cheering (and jeering) in Belgium. Yes, there are the true devotees to the sport, who appreciate us all. Equally, at times, the party nearly overwhelms the sporting event. We knew something was different when the Italians showed up for Saturday preride. They arrived very early and were milling around the trucks, checking out riders and bikes (and not smoking in our faces!). On race day, they cheered for all of us, first to last, with gusto. They often shouted “dia, dia,” which means “go, go,” but sounds like “die, die.” I had to laugh: given the technical challenge of the course and the slight altitude, “die, die” sounded just right!

And the parking was so equitable! Except for a few greats (Marianne Vos, Wout van Aert and Tom Pidcock), rider parking was first-come, first-serve. Since we arrived on Friday afternoon, we were assigned a spot very near the finish, next to some Germans. On Sunday, Allison and I giggled all the way to our parking spot. The Dutch and Belgian campers were parked further away than us! Suddenly, we were no longer “less than.”

Lastly, a word on the coffee. When we rolled into the venue on day one, the woman assigning parking was sipping an espresso, a Moka pot sitting on the ledge behind her. Allison and I loved this image of Italy! In the spirit of “When in Rome,” while in Italy, we drank way too much coffee….. 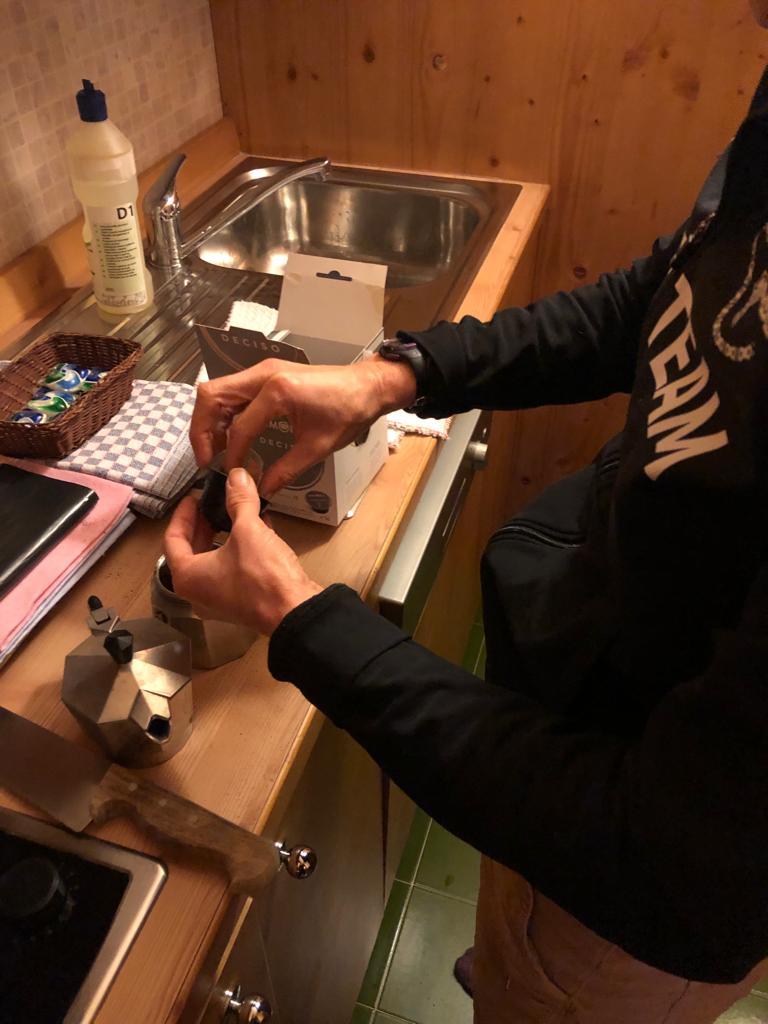