A Proper Farewell to Suzie Godart: The First Lady of Luxembourg Cyclocross Retires at Worlds

At the 2017 Cyclocross Worlds this weekend, a very familiar face within the European cyclocross scene will line up alongside the likes of Sanne Cant, Ellen van Loy, Katie Compton, Katerina Nash and pre-race favorite Marianne Vos. This familiar face is 54-year-old Suzie Godart (CCI Differdange) from Leudelange, Luxembourg.

Godart lives less than ten miles away from the race to be held in Bieles. Hence, she has chosen this hometown race to be her final farewell after twenty years of competing in the Euro cyclocross circuit. Suzie Godart outrunning Father Time back in 2012 in Leuven. © B. Hazen / Cyclocross Magazine

“Ending my career at Worlds in my home country means a lot to me. I can finish with a good feeling of accomplishment. It’ll be the ‘cherry on the cake’, as we say. It’s the most satisfying way ever to say goodbye to my friends and fans from all over the world,” says Godart.

It is really a miracle of sorts that she is given this opportunity to end her career at Worlds held in her own country. The last time she was selected for this event was back in 2002 when it was held in Zolder, Belgium. In 1998, she was already told by her National Federation that she would no longer be selected because “her future was behind.” They didn’t believe that she was worth the investment, nor did they fill their allocated Elite Women’s Worlds spots all those years.

According to Godart, the change of Luxembourg Cycling Federation President allowed her wildest dream to come true. “Even though there was a new president, I believed only after I got the call from the national coach that my racing at worlds was a possibility. He called me on my way back from Fiuggi World Cup,” exclaims Godart.

“Sure, the power is not the same as when I was younger. But I don’t feel that old as I’m always hanging around with kids and younger people. Somehow I stayed a child in my heart, playing in the mud and having fun. This is why I’ve decided to go on as long as I take pleasure in riding and don’t feel ridiculous,” says Godart. 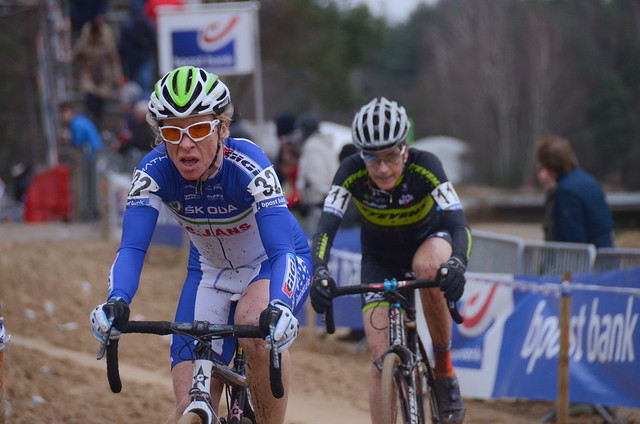 While most people as well as fellow riders have enormous respect for her, there will always be the naysayers. Godart has her response ready for them. “If I hear someone talking stupidly about me, I just hand him my bike and tell him to do better.” To date, nobody’s taken her up on her challenge.

There are two other comparisons in the sport: The ageless 52-year-old Laura Van Gilder, who still races UCI events and just won a Masters title in Hartford, and 54-year-old Masanori Kosaka, who regularly competes with his son Hikaru in Japan’s top UCI events. Godart has them beat in terms of Worlds participation though.

Career In ’Cross and Other Disciplines

Godart fondly remembers her very first cyclocross back in 1997…on an old borrowed bike, complete with bar-end shifters. She was so incredibly hooked on this strange sport that she continued to compete every winter since then. Over the years, she’s earned nine national cyclocross titles, including the 1997 edition which was the first year that Luxembourg held a women’s event. Her last title was won in 2009, in front of professional cyclists Christine Majerus and Nathalie Lamborelle. 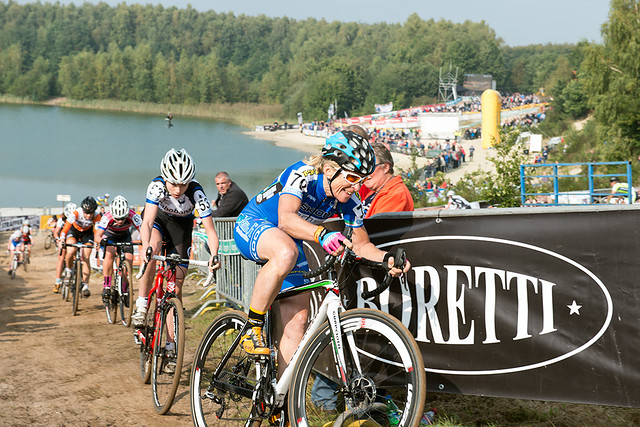 In addition to her accolades in cyclocross, she’s accumulated six mountain bike national titles, one mountain bike downhill title, and three on the road. Over the years, she’s ridden for a handful of UCI road teams such as Fat Birds team with Helen Wyman and Emma Pooley, and Italy’s powerhouse Fenixs team. While on these teams, Godart competed at top events such as Giro d’Italia Femminile.

Her accomplishments are especially impressive considering she only started racing at the age of 32, raised two kids (cyclocross racing daughter Trixy and freerider Fränz), and works full-time as a school teacher. She teaches sports to kids from six to twelve years of age—and certainly can boast to being a role model for lifelong fitness.

“I expect that race day will be really emotional. I hope I won’t forget to start with all my feelings coming up. My first goal is to have fun and enjoy the ‘last heckle’ (the Facebook event name created by her kids in celebration of her final race). I’ll give my best to pass the finish line without being lapped. To me, this would mean a victory,” exclaims Godart. It is expected to be a fast, technical course with short power climbs which surely play in her favor. Luckily, she will also have her husband Marc by her side, and in the pits, to keep her focused. He has been her 1-man support crew for all twenty years of her career. Suzie Godart will run on emotions this weekend in front of her hometown fans in Bieles. © B. Hazen / Cyclocross Magazine

Directly after the women’s event, everyone around the world is invited to Godart’s tent in the parking lot for celebratory drinks. Hundreds of folks are expected to attend this event as she is considered one of the friendliest faces on the circuit. I’ll be supplying the homemade chocolate chip cookies – although she doesn’t know this yet.

More information can be found on her Facebook event page.

Any chance we’ll spot Godart at another elite race after this? “I’m quite sure there will be moments I’ll be tempted, but it’s the right moment to stop, with the best tribute I could ever have.” To satisfy her passion for racing, she is instead setting her sights on Masters Worlds (55-60 category) to be held in Mol, Belgium at the end of this year. Coming home from Mol with another championship jersey seems like a safe bet.

Next post Interview: Curtis White on Nationals Disappointment, World Championship Hopes and a Visit with the Boss