When the calendar turned to 2017, Sanne Cant (Beobank-Corendon) was just 26-years old. Despite her relatively young age, Cant had reached the podium at the World Championships three times, but she had never “won the big one,” as they say.

Her previous two trips were bittersweet. Cant finished second to Pauline Ferrand-Prevot at Tabor in 2015 and then took third in 2016 at Zolder. Two podiums, but no title.

To say Cant wanted the rainbow stripes is an understatement. In fact, in her post-race interview, Cant said she had been dreaming of a World Championship since age six. Would 2017 finally be the year her 20-year dream came true? After a rough start to the season at the U.S. World Cups, Cant righted the ship at the first Superprestige at Gieten after returning to Europe. She would go on to win 13 of the 23 races from the start of October to the World Championships in Bieles, Luxembourg. Three of the races Cant did not win were defeats at the hands of Marianne Vos (Waowdeals Pro Cycling). Vos missed the entire 2015/16 season due to injury and made her return in December at Scheldecross. After finishing fourth in her first race back, Vos went on to win seven straight races heading into the World Championships. When the Women took the line in Bieles, Luxembourg, Vos looked poised to defer Cant’s rainbow dreams yet another season.

Vos was also chasing her own history. Her seven world titles were tied with Eric De Vlaeminck for the most in the sport’s history. One more and Vos would be in a class by herself as the greatest the sport has seen.

A Race for the Ages

After 35 minutes of racing, it looked like the Women’s Worlds race would be featured in our Year in Review to highlight Vos’ record eighth world championship.

Cant and Vos were wheel-to-wheel in the penultimate lap when Cant slipped out and crashed at the bottom of one of the switchback off-cambers. Vos had the advantage and she knew what to do. Cant recovered admirably, but Vos still had an eight-second advantage heading into the last lap.

Then came the “Mechanical Heard ‘Round the World.” 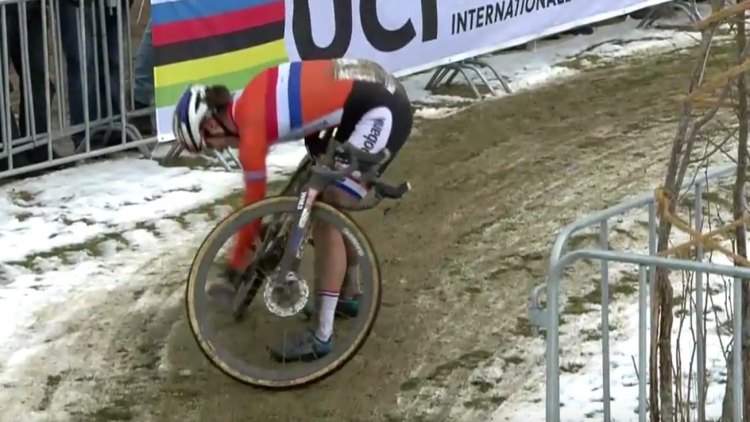 Marianne Vos dropped her chain inside the last lap.

At the exit of a series of turns on the flat first half of the Worlds course, Vos dropped her chain. After looking defeated just seconds before, the Belgian was suddenly brought back to life.

Shortly after, Cant missed her remount after the barriers. The two women were now wheel-to-wheel. One going for a record eighth title, the other looking to finally break through and get her first. The racing lived up to the gravity of the situation, and then some.

Cant held the lead and then Vos powered past her on one of the straights. The two sprinted every step of the stairs. Vos still had the advantage. On a steep rise, Cant again took the lead. On the second switchback off-camber, Vos tried to make the pass, but Cant denied her position. There was no question both women were putting everything out on the cyclocross course.

Leading up to the weekend’s races, the prime social media fodder was videos of the world’s best sliding out on the long off-camber shortly before the finishing straight. The section was so difficult during the week, course designer Adri van der Poel had to re-design it to make it rideable. The social media star would provide the weekend’s decisive moment.

Vos retook the lead on a steep run-up before the off-camber. She had several lengths on Cant heading down the harrowing descent. It looks like Vos was waiting for the right moment to make her move.

Then, at the bottom, her wheel skidded just a little bit. Cant went a little further left and hit a rut. While Vos recovered her speed, Cant carried momentum and made the pass by maybe one pedal stroke.

A few inches, a couple pedal strokes, such was the margin between the rainbow stripes and another second for Sanne Cant. She finally achieved her dream and accordingly, collapsed to the ground at the finish in pure joy. It was a historic accomplishment for Cant and one of the most exciting last laps of cyclocross racing fans have seen in a while.

The win fulfilled a 20-year dream for Cant.

“I can’t believe it. The jersey is mine for a whole year. I have dreamed of it since I was six years old, so it was 20 years ago. I really can’t believe I beat Marianne Vos, she’s seven-time world champion, so it’s really historic. Just an incredible day. The most beautiful day of my life.”

Cant faces a tough title defense in 2018. Vos is back, Pauline Ferrand Prevot has returned and any number of other riders are poised to deny her a repeat. No matter what happens in Valkenburg, Cant will always have that memorable day in Luxembourg when she was perfect when she needed to be to finally realize her dream.

A full replay of the memorable race is available online:

Next post Don't Put That Bike Away (Yet): Ten Bike Maintenance Tips to Have It Ready for Spring