Jack Kissberth of the JAM Fund cyclocross team had a season to remember last year, winning UCI races, racing to fourth at Nationals and lining up against the best in Bieles, Luxembourg for the 2017 UCI Cyclocross World Championships. While at the beginning of last season, most U.S. cyclocross fans could be forgiven for not recognizing Kisseberth’s name, his season to remember has made him into a racer to remember.

In January, we caught up with Kisseberth for a pre-Worlds interview, and today, in what we hope will be a regular column here on Cyclocross Magazine, Kisseberth checks back in with an offseason rider diary that reflects on last year and sets the stage for next season. Drop us a comment below if you have a comment for Kisseberth or if you’d like to read more from him.

I wrapped up my cyclocross season trotting around a bike-eating World Championship course with two flats and a dropped chain. All the work I had put in over the course of the season had culminated in an awkward lap of jogging, slipping, and falling.

As the initial wave of frustration subsided, I couldn’t help but enjoy the spectacle of the moment. Thousands of crazed fans erupted in a beautiful blend of cheers and heckles as I ran by with my beaten bike on my shoulder. Surprised by the increased intensity of cheering, I turned around to see Van Aert and Van Der Poel casually cruise by at an unreasonable speed.

When I first started cyclocross three years ago I never could have guessed that I would be watching a world championship race, let alone participating in one. Once that first race had ended I began living with a constant desire to make it to the next level of the sport. This thirst to move up the ranks was all consuming and whatever joy I felt from winning races or upgrading categories was always fleeting as I immediately moved on to the next goal. 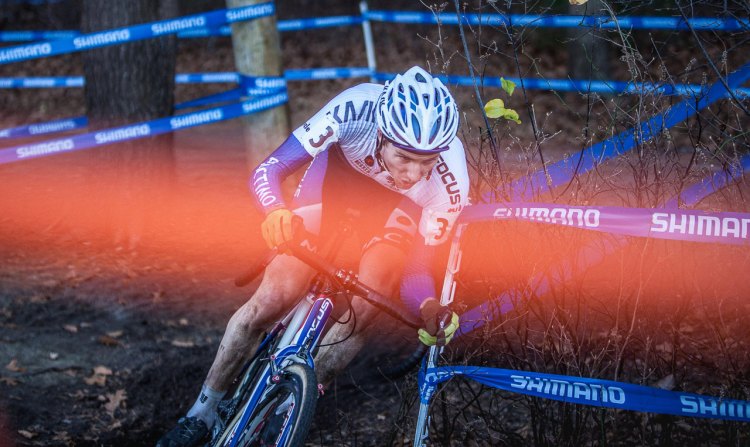 Jack Kisseberth navigates a tricky NBX corner with ease, but felt like a rookie at Worlds in Bieles. © Daghan Perker

Watching the two biggest names in cyclocross carve a muddy corner I found myself in the unfamiliar situation where I couldn’t frame the race as “just a C2” or “just in the U.S, not in Europe.” In front of me was the pinnacle of cyclocross. However terrible my race had been, I was finally able to see the top.

Back in the U.S. I began my off-the-bike rest period where I waited for that hard-earned fitness to leave my legs. Two weeks off might not sound like a lot, but if you’ve been riding every day for as long as you can remember it is an eternity. While this is undoubtedly my least favorite part of the year, it does provide more than enough time to reflect on the season and plan for the upcoming year.

As I became increasingly more stir crazy, one aspect of last season stood out: how freaking gnarly the courses were during the last month of racing. Whether it was Hartford’s mix of snow and ice, Rome’s deadly slip-and-slide through trees, or Luxembourg’s recently-thawed muddy off cambers littered with razor-sharp rocks, the end of the 2016/2017 cyclocross season was largely defined by exceedingly technical course conditions. Jack Kisseberth on his way to fourth at the 2017 Cyclocross National Championships. Elite Men. © A. Yee / Cyclocross Magazine

I knew what work had to be done to improve my fitness over the offseason, but I kept coming up short when trying to plan out how to practice for these difficult race conditions. It’s not like I can recreate a course that has been torn up by thousands of riders over the course of the week through snow and rain.

With no real answer to this dilemma, my coach Al finally relieved my cabin fever and gave me the green light to do some “light” mountain biking. My first ride back was down a partially snowy Mt. Hood and damn it was fun.

Mt Hood and trail bikes are the perfect combo. Dropping in above the snow line on today's off-season ride.

Descending from snow, to mud, to tacky dirt, to dust, I found myself in the familiar situation of constantly adjusting the limit of traction. The 170mm of travel didn’t hurt, but the process of continually analyzing the trails changing conditions brought back the same sensations I had felt during those late-season races. The more time I spent riding the fine line between sliding and crashing, the more comfortable I became.

Watching riders like Mathieu van Der Poel navigate slippery courses exemplifies how you can be relaxed while racing within that zone. Not only does he predict when he will start to slide, but he also knows how to handle the bike while sliding. I’ve found that when riding with wider tires expands the threshold between sliding and falling. Riding a mountain bike on muddy trails allows for you to spend a lot of time sliding with fairly minimal consequences. In contrast, road riding leaves you very little room between sliding and eating pavement. Practicing pushing any bike to the limit of crashing will inevitably lead to wipeouts, but at least when you fall on mountain bike it is on dirt.

Mountain bike skills have always helped me with energy saving during racing. During Cat 5 races these benefits were huge because I could save seconds on corners or technical sections. With every category upgrade, however, the seconds saved from bike handling have continued to decrease.

Warming up for my first World Cup at Hoogerheide I quickly realized how naive I had been about my bike skills. During the first few practice laps, I found myself in the unfamiliar situation where other riders were ripping around me as I struggled to keep my line through corners. I now had to put out just as much power, if not more, to hold my position.

The beauty of cyclocross is that both fitness and skill work are essential to succeed. For a while, my technical ability has allowed me to perform beyond my fitness, but those bike handling benefits do not make up for the power I need to compete at the highest level.

My cyclocross preparation now brings me back to Belgium as I work on building the engine with some road racing. Keep an eye out for another update on this trip as I continue the build towards next season.