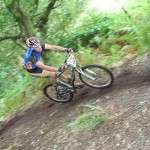 ‘Cross legs getting a little too clean? Want to keep those technical skills honed? Virginia area ‘crossers looking to get on some dirt and test their spring fitness should check out the Massanutten Resort Summer of Championship MTB Races.

Located just 10 miles off of I-81, Massanutten is located in the breathtaking Shenandoah Valley near the Appalachian Trail and the Blue Ridge Parkway. But while Civil War buffs tour battlefields and wine enthusiasts drink local wines, the four-seasons resort at Massanutten has been quietly building a reputation for bike riding and racing for over 15 years. As the resort’s cycling director, George Willets, said last year, “You can count the number of mountains that have hosted both Downhill World Cups and mountain-top road stage wins by Lance Armstrong on one hand; and probably still have enough fingers left over to hold a beer.”

What started out as two small, oddly-named races for local riders have morphed into hugely important national-caliber races for both the gravity and cross-country disciplines as Massanutten’s management, many of them mountain bikers themselves, have gradually increased the priority of the resort’s races with increased staffing and budgets. The Yee-Ha! Downhill, scheduled this year for April 30-May1, has become the traditional season-opener for the increasingly important Gravity East Downhill Series. Taking place in the woods and boulder gardens next to the resort’s ski slopes, the Yee-Ha! annually sends an international field of competitors down a course once used for a UCI World Cup. This year, Massanutten’s other annual mountain bike race weekend has also risen to national prominence as the 22nd annual Hoo-Ha! Cross Country and Super D races on June 19-20 have been selected as the finals of the inaugural U.S. Cup Triple Crown presented by H2O Overdrive, which also counts as both a Kenda Cup Qualifier for the Specialized Invitational Finals in California later in the year and the second round of the new MARC series. Both of the multi-day races cater to amateur competitors as well as elite Pros. Lodging options for both events range from free on-site primitive camping to luxurious condominium rentals

Like the bikes that race on it, the downhill course used at Massanutten has been continually improved since its World Cup debut in 1997. Over the winter, a bridge crossing was built to protect a particularly wet portion of the course that had often deteriorated during past races. But the Yee-Ha! is most famous for its rock gardens and boulders, including the upper rock garden that international officials demanded be removed from the course in 1997. Typically one of the best-attended races in the Gravity East series, last year’s event saw racers come from 23 states and Canada to ride the course that’s only open one weekend a year. A new addition for this year’s Yee-Ha! Downhill weekend is the addition of the Friday night get-together at the lodge at the base of the ski runs featuring food, drink, a massive Foot Down Derby and adults trying to race on a slalom course using tiny kids bikes.

The Hoo-Ha! on Father’s Day weekend June 19-20 will feature Cross Country and Super D races for both Pros and amateurs, as well as a Pro Short Track on Saturday and an XXC endurance race in conjunction with the U.S. Cup Triple Crown and Kenda Cup cross country races on Sunday. Held on the opposite side of the summit from the ski and golf resort on the resort’s undeveloped 6,000 acre western slope, all of the weekend’s races will share a common finish/parking/camping area near the village of Keezletown Virginia. The event starts with Massanutten’s classic Super D. Using a time-trial format, the Super D starts at the 2,400 foot overlook and sends riders on a 900-foot vertical drop cross country plummet to the finish. Later in the afternoon and into the evening, a Pro-only Short Track will take place as the second part of the US Cup Triple Crown to give Pro riders another shot of the huge Triple Crown cash payout. Sunday’s Hoo-Ha! Cross County will start with the XXC endurance race at 9:00, followed shortly by the start of Category 3-4 race and Kid’s Fun Races. The Hoo-Ha itself will start at 11:30 with Pros getting their last shot at points and prize money in the 2010 US Cup H20 Overdrive Triple Crown National Championship and amateurs competing simultaneously in the Kenda Cup Qualifier to secure a starting place in the Specialized Invitational Finals September 11-12 in Bonelli Park, California.

More information about championship mountain bike racing at Massanutten Resort, including lodging information and links to on-line registration, can be found under the “Events” tab at www.MassResort.com.