Mason, Ohio—Conditions at Kingswood Park in Mason went from slick and slippery on Saturday to tacky and blustery on Sunday for the final day of the Cincinnati UCI Cyclocross Weekend (Cincy CX). Tactical racing was showcased in the final two races of the weekend, the UCI Category 2 events for USA Cycling’s Pro Cyclocross Calendar (ProCX).

This is the 15th year for Cincy CX, and the first time back to Kingswood park since 2016. The 2.8-km course features rolling terrain with many short ups and downs, a good portion of off-camber turning, a run-up, and a sand pit. Amateur events included competitions for the Ohio Valley Cyclocross Series.

“It’s just positioning, holding the wheel and being in the right place in the technical sections and stuff like that. Just using your head a little more so it was good.” Keough said about riding in a big group. By the end of the second lap, Noble, Keough and Katerina Nash (Czech Republic/CLIF Pro Team) had managed to get a small gap from the rest of the field. But the front group re-formed soon after.

“I obviously really wanted to win today and that’s something I had to remind myself, ‘remember how badly you want this and don’t let previous wins take away from how badly you want the future ones.’ I never want to lose that fight that I feel really fortunate to have found finally. With that in mind, I was actually really nervous early on in the race, I was like I don’t know if I can do this, especially I think on lap 3, the group came back together and it was a big group of six or seven, and that kind of freaked me out. I was like ‘Oh my God, they chased back on’. We were doing good work,” said Noble. “I was little nervous but I think a lot of people over-exerted themselves and I think I figured out how to race smarter and that’s gone a long way for me.” Racing smartly, Noble, Keough and Nash managed to break away. The steep hill in the wooded section proved decisive for the front trio.

“I was proud of myself because I was riding the hill in the woods, and I think Ellen and I were the only ones riding it. And that’s where we got our gap from Katerina,” said Keough. “Then the next lap I bobbled there and that’s where Ellen got her gap.” With one lap to go, Noble established a gap on Keough with Nash chasing in third place.

Noble claimed her sixth victory in a ProCX event in 41 minutes, 39 seconds.

“For me, I’ve really enjoyed the last six wins, it’s been a different win every single day,” Noble said. “While a couple of them have been start to finish and a couple have been strategic, I feel that the course and the conditions and the way that I wanted it have been different and that bodes well. I think it’s easy for riders to get pigeon-holed and for people to say ‘oh they’re only a sprinter or whatever’, so I’m really proud of myself to feel that I’m racing smart enough to not just be this watt-machine–I hate that word.” Keough crossed the line nine seconds later to claim her second podium of the weekend. “Today was a lot better mentally, I fought harder and I think it showed in my racing,” she said. 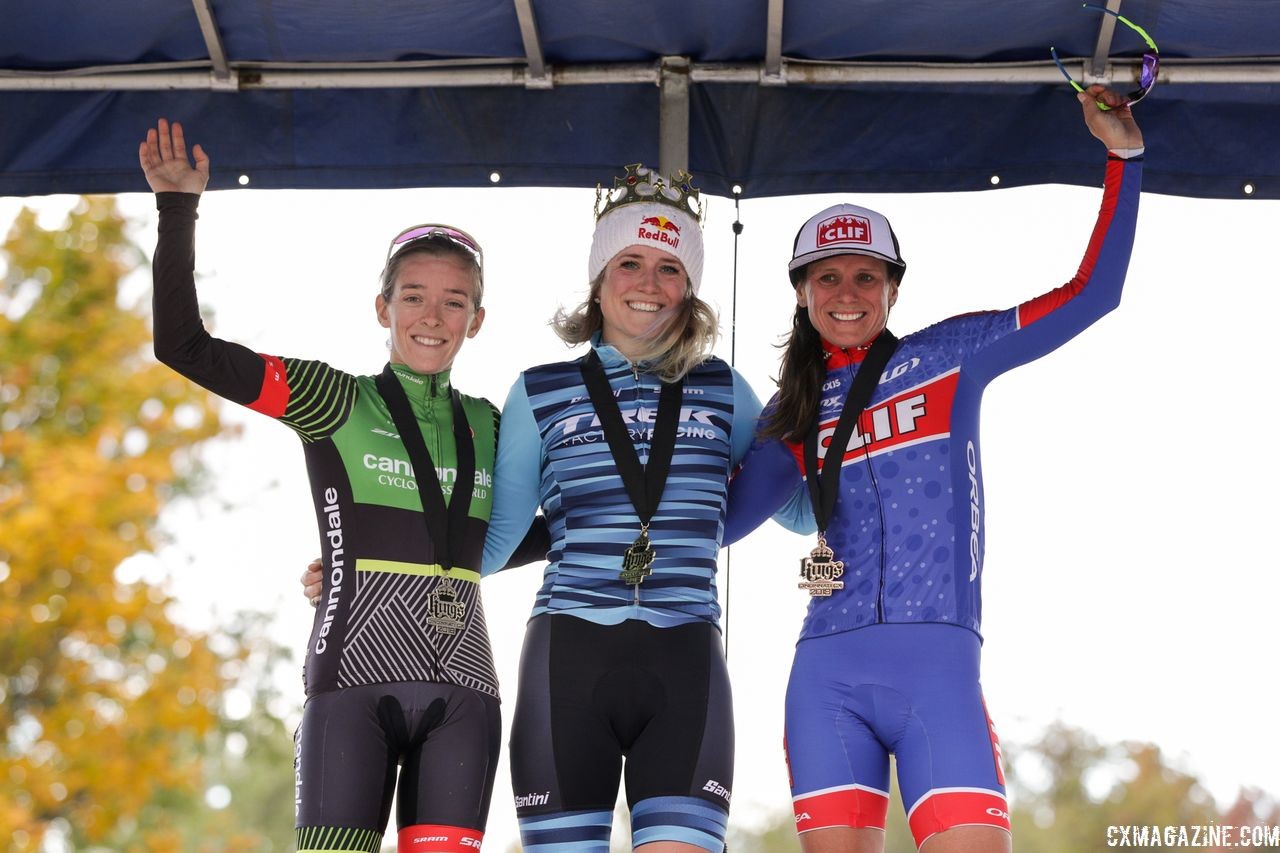 Storm clouds rolled in and already blustery winds increased as the 48 racers lined up for the Elite Men’s C2 race. Kerry Werner (Birdsboro, Penn./Kona Maxxis Shimano) took the holeshot and took to the front followed by a long line of riders.

According to Gage Hecht (Parker, Colo./Alpha Bicycle Co./Groove Subaru), the wind definitely was a factor for the start of the race. “The front guys would get slowed down and the back guys would get pushed up so it really shuffled the field going into the first lap and there was a lot of mixing going on but I ended up fighting back into the group by the second lap, kind of being back and part of the race. That was the biggest factor there and staying on wheels was a big thing today.”

Rain started to fall on the third lap, causing a split in the lead 10-rider front group putting Werner, Hecht and Stephen Hyde (Easthampton, Mass./Cannondale p/b Cyclocrossworld.com) at the front of the race. “As soon as it started to sprinkle, it seemed like everybody was going into the pit,” Werner explained. “So I just laid down a little bit of an effort just because I didn’t know if everybody else was also going to pit, so I wanted to have a little bit of a buffer when I did pit. I went in, and then the next half a lap, other people went in. I think the pit actually opened up some of the gaps that then stayed true to the end of the race.” The trio continued to battle at the front for the next three laps, testing each other but staying together until the final turn around the track.

“There’s a lot of testing each other, instead of looking at lines on the course—you’re doing that as well—but you’re really looking at the competition and trying to find out where they are messing up, where you’re messing up and losing time, and where you can have the upper hand going into the sprint,” Hecht said of the racing dynamics. Hyde, Hecht and Werner got a gap on the field midway through the race. 2018 Cincinnati Cyclocross Day 2. © Bruce Buckley

Hyde was the first one to lose touch. “I went on the front through the tailwind section and tried to give it. When we got back to that pond area, they both went around me into the woods and I was like ‘okay that’s it’,” he explained. “I tried to stay with them, I tried to be smooth, but honestly I was in over my head at that point fitness-wise, and I just started making mistakes. I was like ‘alright, if I’m going to make it to the end of this, I’ve got third and that’s great.’”

Then it was just Werner and Hecht dueling it out for the victory.

“Gage poured it on with a quarter of a lap to go, so I jumped on his wheel. He opened up a bit of a gap on me, maybe two or three seconds by the time we hit pit 2. I managed to pull out of my pedal as he laid down some power. It wasn’t a lot but it was enough to stretch that gap out a little bit more than I was hoping.  We hit the camel and I managed to maybe close down a second or two, but he ran the barriers and I hopped and I think that kind of brought us close enough to where he was maybe uncomfortable with taking the sprint right from the final turn.”

“We hit the pavement and he sat up for a split second. Right when he sat up, I touched his wheel and I went. I knew all I needed was a little bit, and man I was a little nervous, he was coming up on me and I was putting it  all in. It came down to a bike throw, probably half a wheel,” Werner explained.

Werner claimed his seventh victory in a ProCX event in a time of 52 minutes and 10 seconds. Hecht was satisfied with his second place. “I feel really tired. I’m happy with it, happy with the effort. It’s a really strong group of guys that have been going at it for a while, they really know the ropes so it really makes me happy to be able to be in the fight with these guys. It’s really cool.”

Hyde in his second race back since breaking his sternum five weeks ago at the Telenet UCI Cyclocross World Cup in Waterloo, Wisc., finished in third place. “I feel good,” he said. “It was certainly a lot, it was a lot to dig into. From tenth yesterday to third today, I’m definitely happy with my progress.” 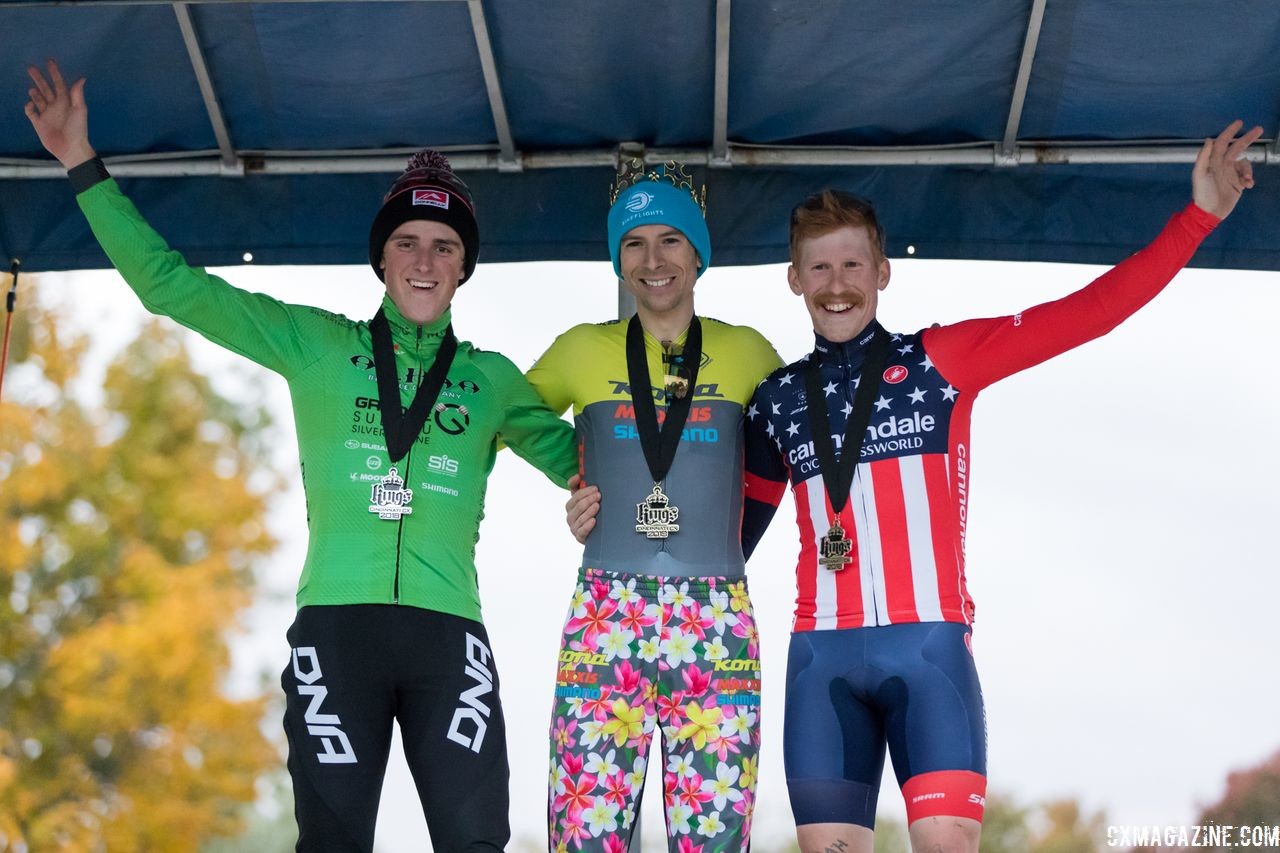 The Really Rad Festival of Cyclocross is new to the ProCX calendar and will be held Nov. 3-4 at the Cape Cod Fairgrounds in Falmouth, Mass. The event will feature two days of UCI Category 2 racing.

The Really Rad Festival of Cyclocross is the continuation of the Plymouth Cyclocross that started in 1977 at the Plymouth Carver High School in Plymouth. Upon moving to the Cape Cod Fairgrounds in 2016, the race was renamed and expanded into the Really Rad Festival of Cyclocross. It is also part of the 2018 Vittoria Northeast Cyclocross Series presented by Clif Bar and Cycle-Smart. The series provides four weekends of competition on classic courses with points and award jerseys for the best UCI Elite, U23 and junior athletes in 10 categories.