Participation in gravel is growing, and Victoria Rainbolt asked herself if the number of women joining the gravel discipline is growing as well. She looked at how female participation in six events has changed over the years and the factors that may have affected those changes. Her write-up is below.

A few years ago, “gravel” didn’t really mean anything in the cycling world. Fast forward to today and you’ll find that gravel has completely carved out its own space in the industry. With more and more races popping up nationwide, there is an increasing number of people eager to dabble in this type of cycling that is neither road nor mountain biking.

While it is obvious that gravel is growing, I was curious how female participation has changed over the years. Are women excited about this new type of riding?

To answer that question, I dug into race results from a number of leading gravel events:

For each event, I recorded the number of female racers for every year of results listed and compared how participation changed over the years. Here is what I found. 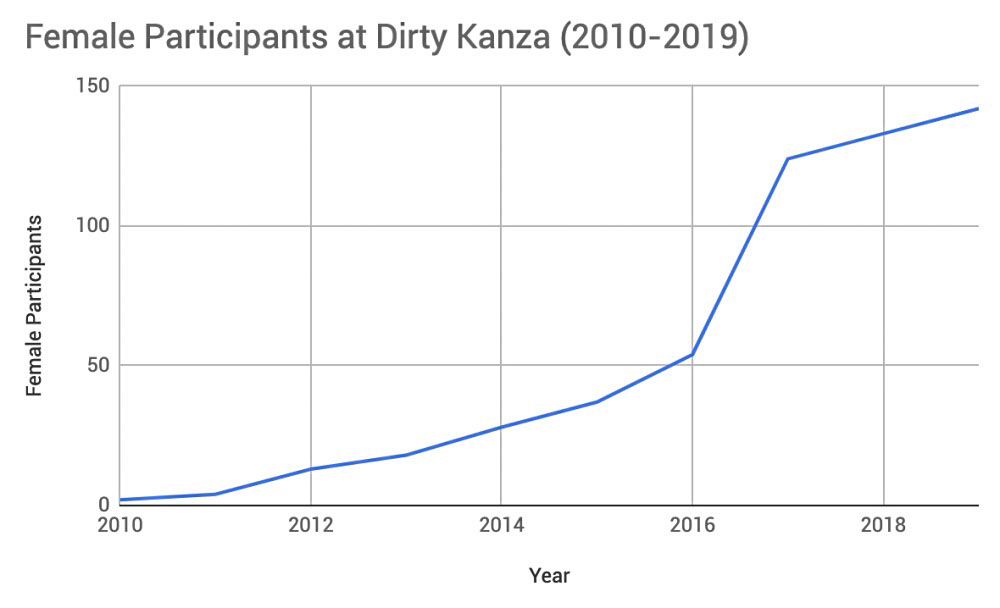 The increase in the number of women competing in Dirty Kanza over the years is very impressive.

I should also point out some time differences over that time. In 2010, Emily Brock won the women’s field with a total time of 17 hours and 4 minutes. In 2019, Amity Rockwell won the race in just under 12 hours.

As this is one of the hardest gravel races out there, it’s almost like people (men and women) actually like suffering on the bike 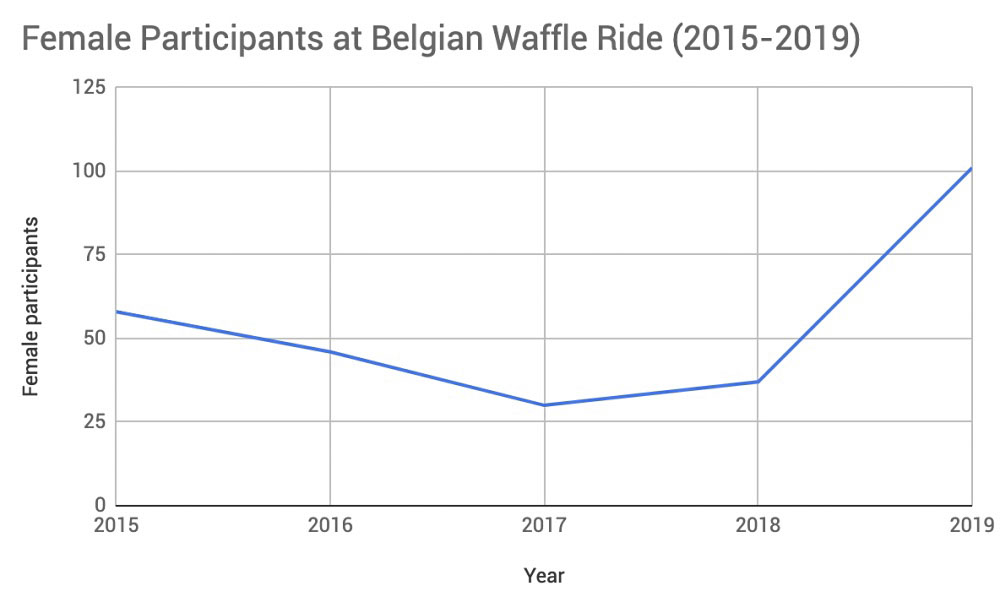 I’m honestly not sure what happened here. Compared to other events I looked at, the Belgian Waffle Ride’s first year with posted results (2015) had more female sign-ups than the average gravel event, which is pretty cool. However, the number of women signing up quickly dropped for the next couple of years. It makes me wonder if the course changed or if certain parts of BWR’s course, marketing, or image were less appealing to women during those couple of years.

The number of female participants slowly picked up between 2017 and 2018. In 2019, female participation rates took off at an incredible rate; BWR ran a promo where each woman could sign a (female) friend up for free.

Most impressive year-over-year jump: 2018 to 2019—a 173% increase in the number of female racers, likely thanks to their new marketing angle and women’s sign up promotion

Crusher in the Tushar Crusher in the Tushar is an interesting one. It’s fairly short in the grand scheme of things—only 70 miles—but it has 10,000 feet of brutal climbing. And, you do it all at elevation.

But, as we saw with Dirty Kanza’s participation rates, women are not scared of climbing or putting in miles. The number of women registering for Crusher is growing, but at a slower, more gradual rate than some of the other gravel races we’ve seen. Between 2014 and 2017, the event went from 24 female participants to 73—still a 204% increase but without any significant year-over-year spikes.

I wonder if this would change if Crusher in the Tushar did more female-focused marketing campaigns for their 2020 event.

Most impressive year-over-year jump: Hard to say; Crusher in the Tushar’s year-to-year increase in female competitors has climbed every year—but at a very gradual rate. Technically their biggest jump was between 2014 and 2015 when there was a 63% increase. Rasputitsa has a fairly impressive number of women racing the event—up to 152 in 2019. As one of the shorter events out there, this seems like this alone could make it quite appealing, especially if you’re newer to gravel. I wonder what would happen if they made a longer course…

Most impressive year-over-year jump: Between 2015 to 2016 Rasputitsa saw a 142% increase in the number of female racers. Rebecca Rusch signs her name on the finisher board after winning the DKXL. 2018 Dirty Kanza 200. © Ian Matteson/ ENVE Composites I’m just going to take a moment to fangirl over Rebecca Rusch, the creator of this ride. She’s a seven-time world champion and won Leadville four times. She also won the DK200 5 times and DKXL (350 miles) the one and only time she’s done it. She is a legend, to say the least.

One reason I was compelled to do RPI (I did it in 2018, got 4 or 5 flats, don’t ask) because I was so excited that Rebecca was putting it on. I highly suspect that I’m not alone in that. In fact, I’d guess there is a very strong relationship between having a female advocate for an event and female sign up rates. If that were to prove true, it could partly explain the impressive ratio of men and women in this event: in 2018, ~32% of the athletes were women, which is quite high for these races. This is not a gravel race but it is definitely an adventure race. It takes numerous days to complete—over a week and sometimes as many as two weeks.

Transcontinental is only for the toughest of the tough. It goes without saying, therefore, that I want to do it and will gladly seize the opportunity to do so should it arise. Very few people—let alone women—complete this event. The first year it ran, only 22 people finished (of those, 1 was a woman).

The Transcontinental Race has been growing pretty steadily over the years. Not sure what happened in 2017, but honestly the total number of women is fairly small as you can see, so it looks a lot more significant than it probably is. That said, significantly fewer men completed the race in 2017 as well; looks like the course was different than previous years; I wonder if it was suddenly a lot harder?

Most impressive year-over-year jump: 2015 to 2016, hands down. They went from 1 female racer to 14 in one year. For other events, I wouldn’t get too excited about this jump, but this is no ordinary event.

Yes, more women are competing in gravel events. Events that run female-focused campaigns benefit from significant boosts in the number of women signing up. It also appears that women are happily onboard with longer, more formidable events.

It will be very interesting to see how this trend shifts in 2020!

Notes: My numbers came directly from each event’s results page. Some were easier to analyze than others. In many cases, I had to count individuals from the overall list so I might be off by one or two riders in some events. There are also a number of other follow-up analyses I could run—comparing male to female ratios and including more events, such as shorter-distance races.