AUSTIN, Texas — From the beginning of the race to the end, Justin Lindine (Team Redline) took control of the Men’s Singlespeed Race at the 2015 National Championships, similarly to his 2014 run at the Masters 30-24 Masters National Championship Race in 2014. Before the first lap was over, he had a six second gap on the rest of the field. Within the second lap, he more than doubled that number.

In the chase group behind him, Tristan Uhl (787 Racing) surged to the front, and the Austin-based rider created an uproar with the crowd shouting his name. He had plenty of company to contend with, however. 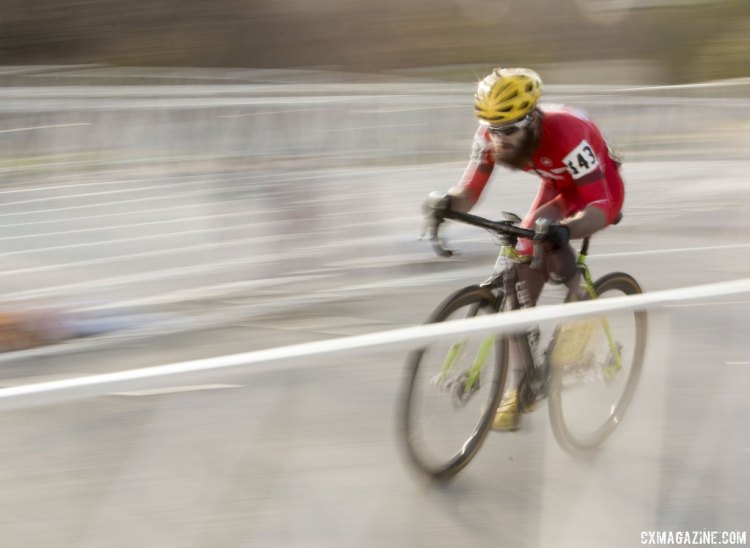 Austin-based Uhl was a fan favorite at the race. © Cyclocross Magazine

Last year’s winner, Tim Allen (Feedback Sports Racing), was never far from the front of the chasing group. The defending champion noticed an upsurge of participation in this year’s field, which included many pro-level riders. Although Allen’s view on the subject wasn’t universal among singlespeed racers, he welcomed the heightened competition. “Even if Jeremy Powers wants to get his f’ing singlespeed out here I’m all for it,” Allen told Cyclocross Magazine after the race. Neff and Allen in the final laps of the Single Speed Nationals. © Cyclocross Magazine

Craig Etheridge (Raleigh/Clement), a singlespeed specialist, never saw the front but battled to an eighth place finish, but wasn’t satisfied with result in a field stacked with cyclocross pros. ( See Etheridge’s candid comments about the validity of the USA Cycling Singlespeed Cyclocross National Championships here.) Kaiser was also one of the big names in the Men’s Singlespeed Race. © Cyclocross Magazine

With three laps to go, and Lindine squarely in the lead, Allen took over the chase with five others, while Myerson fought hard with the second chase group seven seconds back. Even further back, Kaiser was attempting to pick off spots after recovering from what he described as a “scuffle with another rider.”