When racers awoke to rain and wet snow on Saturday morning, it was instantly apparent that the seemingly endless stream of hot, dry, dusty UCI cyclocross races in the U.S. was over.

The question was, were the bunch sprints that we saw at the end of the Junior Men’s races at the KMC Crossfest and U.S. Open of Cyclocross in Boulder over? Three of those races were won by Ben Gomez-Villafane (Top Club Cyclocross), the other by Calder Wood (Rad Racing), who did not make the trip.

While his last U.S. UCI races at the KMC Crossfest were disappointing, Lane Maher (Hot Tubes) came to Covington, Kentucky riding high, after the American Junior made the nine-hour-drive to Ontario last weekend to contest the Silver Goose UCI weekend and came away with two back-to-back wins.

Gomez-Villafane and Maher grabbed their mud tires, deflated them in preparation for the sloppy conditions and lined up hoping to deflate the other’s confidence and put the brakes on his win streak. Meanwhile, 18 others, including some of the country’s best Juniors—including several Montana Cross Camp attendees —were out to prove they had the handling skills and running legs to start their own winning streaks. When the whistle blew, Maher was quick to show he’s rounding into form after starting his cyclocross training just one week before KMC. “I got a gap, and I really thought I could ride away and ride my own race,” he said. Behind him, Sam Noel (Cannondale p/b/ CyclocrossWorld), racing with bib number 18, and missing from the call-ups, was quick to prove Maher’s hope was overly optimistic. “That didn’t end up being the way it worked out,” Maher recalled.

Your leaders of the Junior Men's race, lap 2.

Soon, it looked to be a two-man race as Maher and Noel ran the countless off-cambers and put inches on the chasers with each plant of their muddy feet.

Behind, Noel’s teammate Alex Morton was determined to avoid planting any feet in the muddy ground. Morton bunnyhopped the barriers each time around, and after a bit of hesitation by the two leaders up front, leapt into contention and gave the Cannondale p/b CyclocrossWorld team a numbers advantage. Fans cheer on the leaders of the Junior Men’s race on Day 1 of the Cincinnati UCI weekend. © A. Yee / Cyclocross Magazine

Could the two young men take advantage? Or would further team tactics and a pause in leadership allow the chasing Gomez Villafane to reconnect? With the tough conditions and a heavy dose of running, the prevailing tactic was to stay upright and run fast. “We didn’t talk about anything before, and didn’t talk during the race,” Noel revealed. “The course dictates the race, it’s so hard with the extra mud.” Maher was in no rush to push the pace further. “Halfway through the race, I decided I was just going to take it easy, save my energy, and not ruin the legs and just wait for a last-lap attack.” That patience nearly backfired, however, Maher slipped while running, and briefly turned his cycling shoe into a slipper. His foot got caught under the fencing, popped open his Boa. “My shoe was borderline falling off so once I got to the top I had to ratchet it back on.” 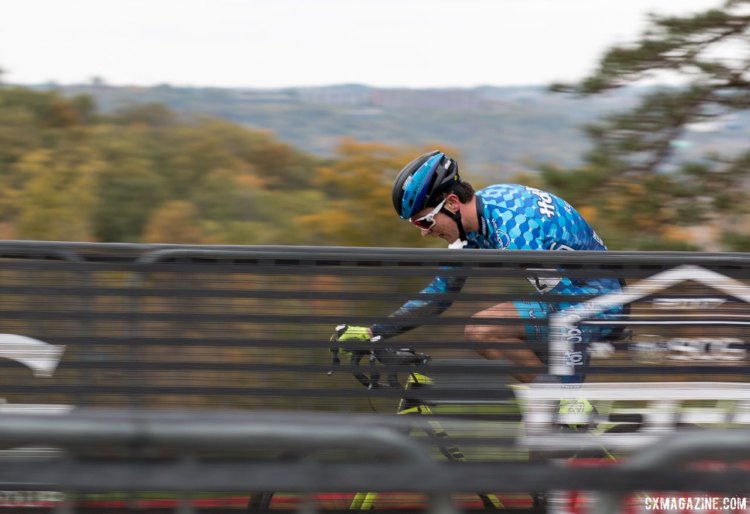 Lane Maher trying to tighten his shoe’s Boa after it popped open. © A. Yee / Cyclocross Magazine

As he turned the Boa’s ratchet, the Cannondale p/b duo ratcheted up the pressure, squeezing by and lighting up the drama. “That was a match I really didn’t want to burn to catch back on,” Maher admitted.

Once he caught back up, Maher recovered and waited for his moment. At the point furthest from the finish line, on a left-hand turn before pavement, Maher took an inside line and accelerated onto the pavement. Noel was first to pop, and Morton was gapped but launched a determined chase. Perhaps his bunny-hopping skills over the barriers could help him claw back a few precious seconds. Alex Morton, Lane Maher and Sam Noel battle on the muddy course on Day 1 of the 2017 Cincinnati Cyclocross weekend. © A. Yee / Cyclocross Magazine

As the two turned onto the finishing straight one final time. Morton had Maher in his sights.

Only Maher was already looking back, realizing his mid-race adjustment to target a last-lap attack was aimed perfectly. Maher’s win was his third in three races. Lane Maher celebrates his win on Day 1 of the Cincinnati UCI weekend. © A. Yee / Cyclocross Magazine

The Junior Men reload for another UCI race tomorrow. Maher will line up tomorrow with a target on his back.

Stay tuned for more coverage from the 2017 Cincinnati Cyclocross weekend.

Next post Kaitie Keough Stomps Out an Authoritative Cincy Win, US Cup-CX Lead