BOULDER, Colo.—Windy conditions continued for the start of Sunday races at the U.S. Open of Cyclocross across Valmont Bike Park. It would be the second full day of UCI Category 2 with USA Cycling’s Professional Cyclocross Calendar (ProCX) points on the line for Junior 17-18 Men, Under-23 Men, Elite Women and Elite Men. Ben Gomez-Villafane had good vibes this weekend in Boulder, winning the Junior race both days. © A. Yee / Cyclocross Magazine

“Essentially the race played out pretty interesting today. At first there wasn’t any wind, and then throughout the race it really picked up, especially at the end. The wind really kept the race together,” said Gomez-Villafane about winds reaching 20-plus miles an hour or more, for a second consecutive day. “At the front it was me, Tyler Clark, Torin (Bickmore), Scott Funston and Calder Wood. And we were at the front just hammering the whole time. Most of us are from sea level, so it was a level playing field. Towards the end it became more of a tactical race.”

In the U23 battle it was an all-Colorado contest. Boulder’s Eric Brunner (Evol Racing) opened a small gap in the lead group with two laps to go, leaving Saturday’s winner Gage Hecht (Alpha Bicycle Co./Groove Subaru) of Parker, Colo. to chase, along with Boulder riders Grant Ellwood (Boulder Cycle Sport), Denzel Stephenson (Evol Racing) and Maxx Chance (Evol Racing). The chasing paid off with a big kick in the final sprint and Hecht secured his second U23 race in two days at Valmont Bike Park. “It’s always great to race a UCI-level race here at home. Yesterday was amazing. I was super stoked. It’s my first UCI win of the season, which is fantastic. Today I was able to double up,” said U23 winner Hecht. “It was so much fun racing with those guys. We always have real good competition. I think it makes us all faster.”

Second was secured by Stephenson and third went to Ellwood. Eric Brunner, who finished third on Saturday, would miss the podium and finish fourth on Sunday.

McFadden Sprints to the Win

In the Category 2 Elite Women’s race, Courtenay Mcfadden (Pivot Cycles p/b DNA) pushed across the line as the winner in a three-rider sprint. Rising star Katie Clouse (Alpha Bicycle Co.) of Littleton, Colo. grabbed the silver, with the bronze going to Caroline Mani (Van Dessel) of France. Clouse and Mani switched positions on the podium on Sunday, as Clouse finished behind Mani the day before. It was the first UCI cyclocross win for ProCX points this year for Mcfadden, who came into the weekend 15th overall in the elite women’s ProCX standings.

Three riders would make a move on the twisty course with two laps to go, and the move would stick for the final podium. It would be the Australian Millburn crossing the line for his first ProCX win this year in five events. Riveros would finish one-tenth of a second behind for second place, and van den Ham would roll across the line in third. Swenson finished fourth, and Driscoll managed fifth. “Today certainly had enough of a challenge. It broke up a little bit and we had a few gaps. I was just trying to stay at the front,” Millburn said about how the C2 men’s race played out.  “I knew the kind of group I was with. I was confident that I could get the sprint if I just positioned myself right. So I kind of went early on this back straight and into that final corner first. I pulled a pedal. Hector was coming, and I got my foot back in (the pedal), found a few more gears and got there in the end. A great way to cap off the U.S. season for us.” 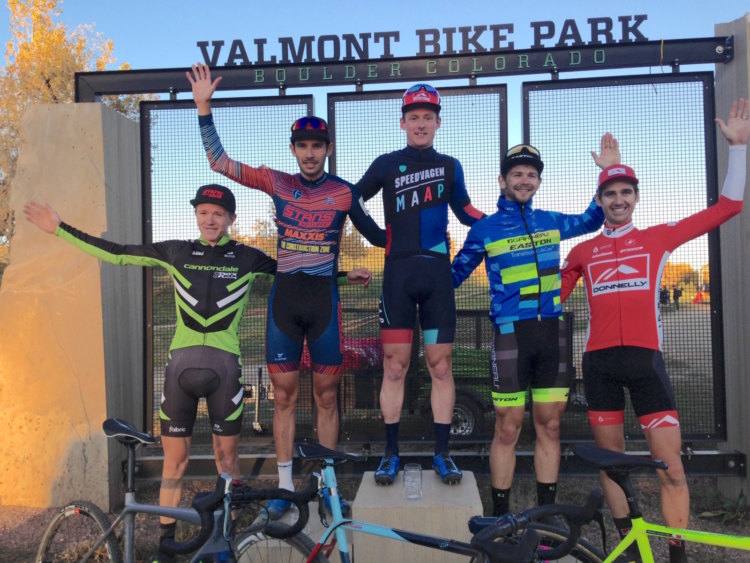 Millburn was proud to be the first Australian to win a UCI race at US Open of Cyclocross. “Today was pretty good. My wife and I love Boulder,” he continued. “I’m from Sydney, Australia, so this is kind of small town, but enough of what we need. Sydney is just hustle and bustle. This is finishing off our U.S. block now. We did the two World Cups and went to KMC (Cross Fest) and Interlaken (Bloomfield, Colo.) last weekend. Tomorrow morning back to Sydney.”

ProCX racing continues Oct. 21-22 at DCCX in metro Washington, D.C. Races are part of the BikeReg Cyclocross Super Series, and Elite Women and Elite Men competitions are part of USA Cycling’s Professional Cyclocross Calendar (ProCX). DCCX was named the “best local bike race” of 2017 by Washington City Paper, noting that the venue used for the two-day event, The Armed Forces Retirement Home, is normally closed to the public.

The 2017 ProCX schedule provides a total of 43 race days across 18 states and the District of Columbia. The calendar spans September to December and is comprised of UCI-inscripted Category 1 and Category 2 races. Follow ProCX updates and standings this season on Twitter (#ProCX and @USACProCX), Facebook (usacycling) and at www.usacycling.org/procx.