Sunday School: Finding Truth in Tire Width and Volume by Relearning Our Numbers, Units and ABCs

They’re both commonly-asked questions that often lead to a lot of incorrect assumptions. To get David accurate answers, it’s time to relearn our numbers and alphabet, talk about width measurements in general and also come clean.

You see, we’re part of the confusing problem. Read almost any piece that talks about road, cyclocross or gravel tires and tire widths and you’re bound to find a technical error that media and most tire manufacturers are guilty of. Whether it’s the news about 700x40c tire options, 33c tire width rules, and new 32c widths and treads unveiled, you see it over and over again. What do they have all in common? The incorrect use of the letter C.

First of all, what the heck does the C stand for? You’d be forgiven if you thought it was some abbreviation for a metric measurement, since the 700 represents millimeters, and a 40c tire is supposed to equate to a 40mm wide on certain width rims. However, the C is not even a unit.

As the late great Sheldon Brown detailed, the C is simply an old French designation that provides guidance of the width of a tire needed on a certain diameter rim to equate to the intended outer diameter of a tire—in our world—700mm.

Our “normal” 700c rims are just 622mm in diameter, while the largely defunct 700a and 700b sizes were 642 and 635mm in bead seat diameter, respectively. These larger-diameter rims were intended for narrower tires than the wide rubber historically used on a 700c rim, keeping the same wheel diameter and thus similar ride and standover heights. In theory, by paying attention to the rim letter and using an appropriate tire width (and having 2cm of brake pad adjustment), you could swap out wheels and tires between 700a, 700b and 700c, without changing effective gear inches or center of gravity.

Thanks to GT, there was even a brief period when the smaller diameter 700d was a thing. 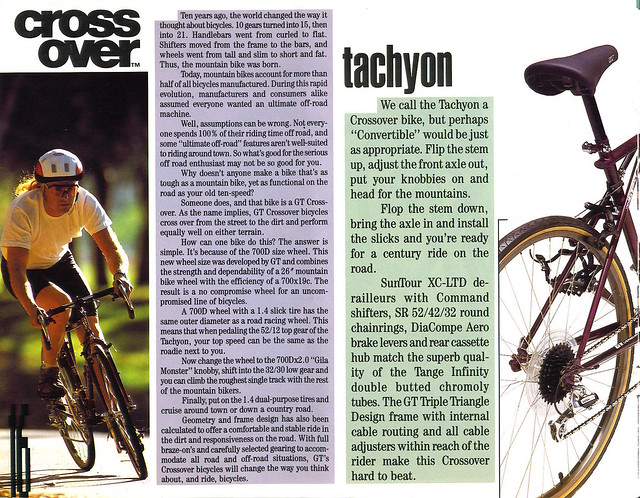 Many decades later, some bike companies are now taking that philosophy to the extreme with modern gravel bikes, marketing the option to swap out 700c wheels and tires for 650b wheels and high-volume rubber.

It’s not like 700mm is some magic number, but it’s interesting that for many decades, we’ve been riding 700c rims on the road with much narrower tires than the rim was originally designed for. With a 23mm road tire or narrower, a 700c wheel will measure out to be just 665mm or less in outer diameter.

Coincidentally, we’re finally back to an era where many of us are riding 700mm diameter wheels. The new crop of 40mm tires ends up just around 700mm on a 700c rim—exactly what the 622mm diameter was designed for.

A Need for (Better) Standards?

We’d be all more accurate and would avoid David’s confusion if we dropped the C for tire widths and just used mm. And for wheel sizes, we’d also be more accurate if we adopted actual bead seat diameters, like 622mm for road, cyclocross, gravel and 29er applications. We’ve lost count of the number of times people have asked us about the difference between 700c and 29er rims and wheels, but to be clear, and to finally answer David’s second question, they’re the same. Both labels refer to a rim with a bead seat diameter of 622mm.

We’d be all more accurate and would avoid David’s confusion if we dropped the C for tire widths and just used mm.

Pretty confusing right? If only we had some standards! The ISO / ETRTO measurements attempt to do just that. Hidden somewhere on most tires are two imprinted numbers that reveal the intended rim diameter and inflated width. They’ll read something like 33-622. The first number is for width and the second is the diameter.

However, as anyone with calipers or attempting to race clinchers in a UCI race is well aware of, the ETRTO is only a guess at best as to how big the tire will inflate up to, and there are several variables that play key roles in tire width. Tire pressure obviously plays a role, which is why we do our best to list tire pressure when providing a width measurement of a test tire. We’ve seen the latest crop of wide gravel tires grow by 2mm when inflating a tire from 20 psi to 80 psi.

Internal rim width certainly also alters the inflated width of a tire, and manufacturers aren’t consistent in terms of rim width used to measure tires. A wider rim makes for a wider tire, but not on a one-for-one ratio. Craigsj on the MTBR forums tirelessly assembled a database of mountain bike tire widths, and his calculations of tire widths on different rim widths indicate that for every millimeter gained in internal rim width, you gain about a third of that in effective tire width.

In 1997, WTB brought a new measurement technique to market years ago, as WTB’s blog recalls, with its Global Measuring System that attempted to standardize tire measurements based on a set width rim and pressure and provided both casing and tread width measurements.

It was a useful measurement to compare tires within the brand, but as rim widths started to grow and vary greatly, and other companies did not adopt the standard, it disappeared from the company’s tire markings and literature.

B2B Cuts to the Chase

No, we’re not talking business-to-business pre-Internet bubble startups, or the Blitz to Barrel mountain bike race. A group of fat bikers and mountain bikers have been making their own push to cut through the casing of tire brands’ measurements to have true comparable indications of tire volume. They’re doing this by measuring uninflated tires from bead to bead along the contour of the casing.

The group has built up an impressive database and model that compares tires 2.1″ and up and attempts to estimate the true tire width on different rim widths. Craig Jones and the mtb community has contributed to this extensive database that measures mountain bike tire casings.

While this group, just as many of us cyclocrossers do, is typically seeking out the highest volume tires and wants to avoid purchasing based on a manufacturer’s potentially misleading label, extending this database down to smaller widths would also help many of us make purchasing decisions when looking for the biggest tire to squeeze in our tire clearance-constrained cyclocross or gravel bikes. (Although such measurements do not consider tread width or height.)

Breaking Down the Wall

Historically, any tire with a C in its size was targeted for the road bike crowd (or cyclocross, gravel, touring, commuting) while anything in inches has been designated for mountain bikes. Such attempts to build a wall between the two types of uses and riders is outdated nowadays, as our recent group of review bikes demonstrates. We’re riding plus-sized tires on drop bar bikes, 2.1″ rubber on 650b/27.5″ wheels on cyclocross bikes, and at the end of the day, they’re all bikes, we’re all cyclists, and so why delineate between the two? We may not have the tire industry immediately skidding into a 180 with our suggestions, but we certainly suggest that you do not fall into such thinking because it only artificially limits your tire choices. Compare a Specialized Renegade 1.8″ tire mountain bike with a Clement MSO 50c gravel tire and you’ll see what we mean. There’s a big overlap between the two groups in volume.

The math is easy, but it’s still hard for most of us to remember when tire shopping:

Conversion between mm and inches in tire widths:

Conversion between inches and mm in tire widths:

There’s a handful of lightweight mountain bike tires labeled 1.7″ to 2.0″ wide that are barely bigger than a 40c tire when you actually measure them, and it’s been a recent CXM habit to cherry-pick the narrower, lighter 29er options for monster crossin’ and gravel riding.

But companies don’t always make it easy for you to see all the width options. WTB has its versatile Riddler categorized as a mountain bike tire in the 2.25″ width, but the 45c and 37c options are in the gravel/CX category. It’s a slightly dated differentiation, since now it’s realistic for some drop bar riders to want to go bigger than 45c, and vice versa.

Poking around Kenda’s website a few months ago, we noticed the cyclocross and gravel tires top out at 40c, but much to our surprise, under mountain bike tires, there’s a 1.8″ (46c) Slant Six Pro along with a 1.9″ Small Block Eight Pro and Karma Pro, both just 510g and around 48c.

German tire company Schwalbe takes a more Euro-centric approach, with a search-by ETRTO option in its product finder that searches through all categories by diameter and width. This makes it easy to ignore labels and search for a specific size, which is great. What we’d love to see next is an ability to filter all tires by a rim diameter and then sort by ETRTO width.

Some of us are old enough to remember the days before 29ers when there were just a few tire choices 40c or bigger. The Panaracer Smoke 45c (used by Mark McCormack in his second place at the snowy 1995 Leicester Nationals) was one of the first, followed by other “monster cross” options like the 45c Panaracer Fire XC and the 44c WTB Mutano Raptor, but choices were severely limited and kept getting discontinued.

Now it seems we can’t go to our mailbox without finding another new 40 or 45c tire waiting to be ridden, and it’s awesome. We’re grateful to have so many options well-suited to the way many of us ride our bikes. 2017 Raleigh Stuntman is ready for longer climbs after shedding two pounds through a tubeless conversion and tire swap. © Cyclocross Magazine

With the line between mountain bikes and drop-bar adventure bikes getting blurrier each year, perhaps it’s time for companies to make it easier for consumers to choose between all the suitable tire options, without worrying about labels, misleading measurements, trial and error and wondering if the tire will fit their needs and their frame.

We’ve learned to adopt the arbitrary 700c term, despite the arcane and confusing letter designation. There’s no reason we can’t adopt a more useful bead-to-bead measurement.

Have a question or topic you’d like us to explore (in far greater detail than you might want)? Submit it below.