The 2017 KMC Cross Fest kicked off the first weekend of competition of the Sho-Air US Cup-CX series at Thompson Speedway Motorsports Park in Thompson, Conn. on Friday, Sept. 29. The elite men’s and women’s UCI Category 1 races saw all the leaders bunched together and both contests came down to the final turns and final sprints. Kaitlin Keough (Cannondale p/b Cyclocrossworld.com) and Tobin Ortenblad (Santa Cruz/Donkey Label Racing) took the wins in the Friday night Category 1 events. They also grabbed the early leads in the Sho-Air-US Cup-CX series.

Keough Continues Her Run of Success at KMC

Rochette would attack Keough and White until the final turns taking it into a track sprint, but Keough would overtake her in the final meters. “It’s a hard course,” said Keough, making the win her second C1 victory this year, the first coming at Jingle Cross in Iowa City, Iowa. “There was nothing that was really splitting it up. That last lap Maghalie and I were pretty much sprinting the entire lap. I think I went the first half and she went the last half. She’s really strong over the technical sections.” 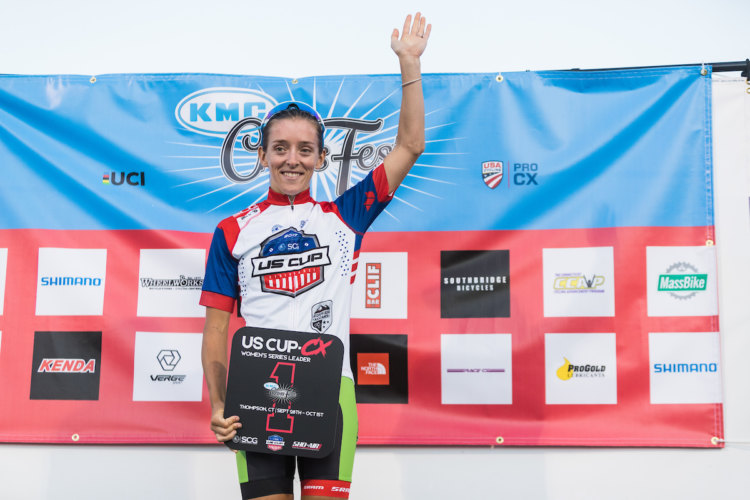 Kaitie Keough holds the lead in the US Cup-CX series after one race. 2017 KMC Cross Fest Day 1 (Friday) © W. Matthews

Rochette pushed the pace for most of the six-lap race. “It was pretty painful. On the last lap Katie went in front of me. I knew it wasn’t windy, so I thought I would lead out the sprint. And in the final corner, I said ‘I gotta go now.’ I just sprinted and she nipped me at the end. That’s OK. It was a really good race,” the Canadian National Champion added. Ortenblad Uses the Top Gear to Reign in Connecticut

The Elite Men’s ProCx C1 race was tactical from start to finish. A group of nine would go into the final turns together. It was Ortenblad pushing to the front with an inside line in the last corner at Thompson Speedway to outlast 19-year-old Spencer Petrov (Aspire Racing), who earned second. Jack Kisseberth (JAM Fund/NCC) would take the line for third. Stephen Hyde (Cannondale p/b CyclocrossWorld.com), who won this race last year, would finish fourth.

“It was such a crit dynamic, it was such a big group. (Stephen) Hyde, Jack and I had a gap at one point. It came back together. There were just small attacks and no big stuff though. I was pretty confident that I could win a sprint out of the group with the top guys. I put on a bigger gear tonight, because I knew it would be a super fast finish,” said Ortenblad about no big attacks taking place during the nine long laps. “I tried to stay at the front. There might have been a pinch of hesitation going into the last chicanes and the hairpin into the sprint. I just went as hard as I could. I thought if I was going a hundred (miles an hour) no one could probably get by and wound it up from there.” 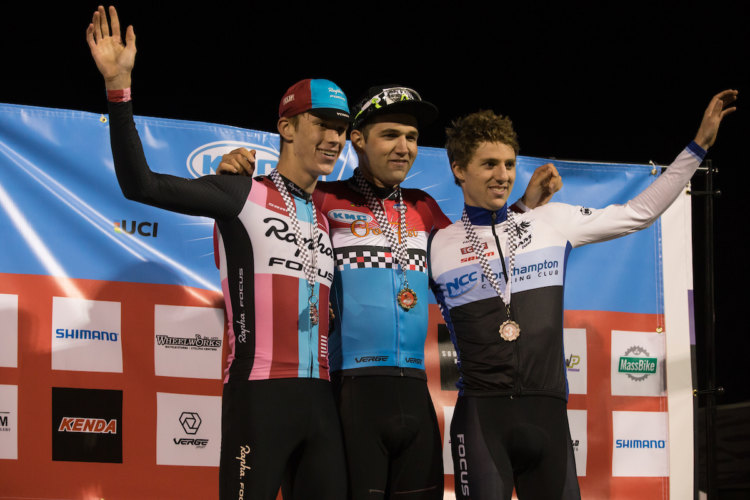 With wins in the C1 events, both Keough and Ortenblad take the early leads in the Sho-Air US Cup-CX series. There are a total of seven races at four ProCX events where points will be earned, and the season-ending winners for women and men will each take home $10,000.

“I came into the season and saw the prize purse was huge. I run my own program, so it’s a hustle to find sponsors, to find the money. I knew it was something I could potentially win. When you are out there racing you forget about that part, and you just want to win no matter what. I am leading and hopefully I can hold onto the lead for the next couple of weeks,” added Ortenblad about earning the lead for the Sho-Air US Cup-CX for the men. 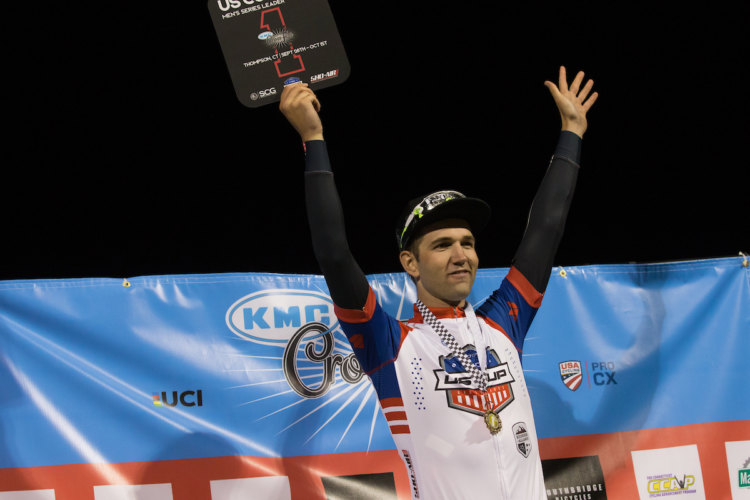 Tobin Ortenblad holds the lead after one race of the US Cup-CX series. 2017 KMC Cross Fest Day 1 (Friday) © W. Matthews

ProCX continues at KMC Cross Fest in Thompson, Conn. with C2 races Sunday, Oct. 1. The new West Sacramento Cyclocross Grand Prix in West Sacramento, Calif. will have C2 races on Sept. 30 and Oct. 1. WSCXGP is one largest cyclocross races in California and the largest USAC-sanctioned race on the West Coast.

Two American Cyclocross Calendar (ACXC) events will also be contested Saturday and Sunday with the GO Cross presented by Deschutes Brewery in Roanoke, Va. and the Tri-Star CX in Memphis, Tenn. The inaugural GO Cross presented by Deschutes Brewery takes place in Virginia’s Blue Ridge at Fallon Park. This venue features to only permanent cyclocross course in the state. Tri-Star CX will be held for the sixth year at Shelby Farms Park, which features 4,500 acres and is one of the largest urban parks in the U.S. It is the first year Tri-Star CX has been upgraded to the ACXC. Both races take place Sept. 30-Oct. 1.

USA Cycling ProCX features the premier cyclocross events in America and uses an overall ranking system to determine the best individual male and female ‘cross racers over the course of the season. The ProCX calendar includes 43 UCI-inscripted category 1 and 2 races in the country. To learn more about USA Cycling, visit usacycling.org, and follow Pro CX all season on Twitter – @USACProCX (#ProCX).