For the past several years, Elle Anderson’s life has had a certain rhythm. Every August, she packed her stuff and left her California home and job at Strava to head to Belgium to live and race cyclocross. Then when the season ends, she returns from the gloomy Flemish flatlands to the hills and occasional fog of the Bay Area.

This year, Anderson changed her routine. Instead of returning to California, she decided to stay in Belgium for the summer. Anderson got married to her now-husband Neils last summer, so she has a good support network in her adopted hometown of Oostende.

“It is kind of in the details,” she said about the new chapter in her life. “Right now is when I feel like I’m disrupting the rhythm because normally this time of year I would be in California working for Strava and training. And so even though I’ve spent the last six months in Europe, it still feels like I’m moving now because it’s when I am disrupting my previous rhythm and really embarking on something I feel is new. A new page.”

I spoke with Anderson a few weeks ago while she was off in the Pyrenees getting some early offseason base miles in (staying in Europe has its perks!). Her mountain internet came through, and we were able to chat about her new adventure, finishing 8th at Worlds, “making it in Europe” and a lot more. Elle Anderson’s summer in Europe started with a trip to the Pyrenees. photo: courtesy

Making It In Belgium

After a monster season in 2013/14 capped by a second-place finish at Nationals, Anderson opted to follow in the footsteps of Jonathan Page and move to Europe to race full time. She started the campaign with several top fives, but then had the experience marred by issues with her team and European hosts. Anderson spent the next season mostly racing near home, and then at the beginning of the 2015/16 season and returned to live and race in Europe with her own Elle Anderson Racing program. Then this past season, she signed with the now Milwaukee – Alpha Motorhomes team and gave racing for a Belgian team a second shot.

“I appreciate that I got to run my own solo program for two years, but I also appreciate how much hard work it is and how stressful and nerve-wracking it is,” she said. “I think after those two years putting together my own program, I was really grateful to find a European-based program that was such a good fit. In a lot of ways, I was very tentative to ride for another Belgian team at all, for the rest of time, because I had such a traumatic experience that first season. It wasn’t necessarily the fault of the Belgian team, I just kind of threw it in there with everything else that went wrong that season.” Elle Anderson, seen here during her team training camp in Mallorca, is heading into her second season with her Milwaukee – Alpha Motorhomes team. photo: courtesy

When we spoke with her about missing the 2018 Nationals in Reno, she mentioned that she felt like she was “making it,” as a cyclocross racer in Europe. I asked her what she meant by that comment.

“That statement came from a reflection on the last three years and how different it feels for me to race cyclocross in Europe now versus three years ago,” Anderson said. “I think about that first year I came over to race in Europe, and it was quite a shock to the system. I felt like I was this really successful American cyclocross racer, I had won a ton of UCI races in North America and all of a sudden I was over in Europe and struggling. Struggling to get a top 10 or top 15. I really felt like it was a whole different ballgame to really commit to the season.”

She continued, “When I think about that first year and then reflect on how I feel at the races now, it’s such a huge difference. I feel my commitment to racing in Europe for the last couple of years has really paid off. It means I have a lot of friends at the races, there are a lot of familiar faces. I feel like I am really established in the cyclocross scene in Europe, and I feel really at home. I know the courses, I know the venues, I know the competition and it feels really routine for me.” Racing full-time in Europe is something we frequently ask U.S. athletes about, but in recent years, the number of top-level American riders who have raced full-time in Europe is pretty small. Jonathan Page did it for years, and last year, Katie Compton won the IJsboerke Trofee series while living full-time in Belgium. Other riders such as Stephen Hyde have said they have little interest in doing Europe, and so I have always wondered what is it about Anderson that makes her a good fit for pulling off the Belgian racing thing, especially after everything she dealt with her first year.

“Probably just because I am crazy and super stubborn,” she replied. “I traveled a lot in Europe when I was younger. I used to go to ski camps in the Alps, so I feel like even from a really young age I was comfortable even being a tourist in Europe. From a young age I got a hang for the cultural differences that most Americans feel like are difficult to deal with when they’re competing over in Europe. I’ve always really liked an adventure and I’ve always liked a challenge.” She concluded, “That sense of adventure, where a lot of things aren’t easy, but it’s so much more satisfying to get through those difficult challenges.”

With air time on streams of European races reserved for the race leaders and even top tens garnering usually just a mention in our race reports, there is no question Anderson is sacrificing a lot of U.S. coverage to race in Europe. She said that even though she is not the frequent star of race reports, the challenge and its accompanying tough races have been worth it for her.

“For me, since the first time I went to Europe for a few races over the Christmas period in 2013, I was just so in awe of the scene in Europe. I was so in awe of the competition and the number of spectators at the races and the elevated prestige of cyclocross in Europe. It was kind of a natural decision for me to give up winning races for European cyclocross where more often than not I feel like I’m getting a good whooping every race. I find it so much more personally challenging and so much more satisfying at the end of the day to compete in Europe and have to fight for every second and every place.” 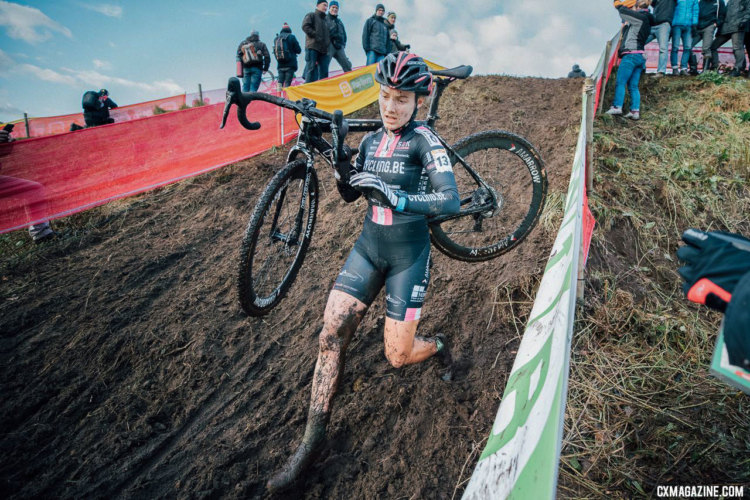 In a Select Crowd

Despite facing the challenging European courses and fields, Anderson still had a very successful season. One of the highlights was her first career European win at the Ziklo Cross Igorre in Spain. It also came with a sweet podium prize, which was up there among her favorites. “It’s definitely up there, but I’ll never forget the Trek CXC Cup back in the day used to give these trophies that were like skulls,” she said. “They were deer skulls with little antlers that looked like they had been left out in the desert. Those were really cool. I’ve been fortunate enough to have some cool trophies, but the Basque Country hats are definitely up there.” (Don’t worry, I will never pass up the opportunity for a gratuitous Wisconsin reference.) Throughout the 2017/18 season, it was hard to miss how well the American women raced. Kaitie Keough finished second in the World Cup overall, Katie Compton won several races and the IJsboerke Trofee overall and Ellen Noble podiumed at World Cup Waterloo and gave Compton a tough challenge at Nationals in Reno. Although she did not necessarily have a series or World Cup win to her name, Anderson competed for the top ten all season long and was ready to make sure fans did not forget about her as one of the top U.S. women.

Anderson finished fifth at the Valkenburg World Cup during her first Belgian season, so perhaps it was fitting she would race well when the venue hosted Worlds. After getting out to a fast start—so fast announcer Anthony McCrossan confused her with Keough, then Noble—Anderson managed a career ride on the epic course to finish 8th and join Compton and Keough as the three American women in the top 10. Anderson is, not surprisingly, proud of what she did.

“It’s a huge honor,” she said about being mentioned alongside Compton and Keough. “I can definitely say Katie Compton has inspired me over the years to chase my cyclocross goals and specifically chase goals in Europe. It’s such an honor to be included in that group of successful American women. I’m really proud and I’m really happy.”

“It hasn’t always been so easy for me. I’ve had some rough seasons, I’ve had some frustrating results or days where I didn’t feel like I was racing at my full potential. Getting that result at Worlds and also being part of this really successful American team was so satisfying. It really felt like years of hard work was paying off in that moment.”

Looking back, Anderson said the whole day of Worlds is still kind of a blur. “The day and the race itself went by pretty fast and was a whirlwind. There was such a high feeling, like a high water mark after the race, being really proud of my result. Also, typically I crash pretty hard afterward. I had the typical, sit on the couch, “man what just happened” kind of feeling. That was the sign that told me I had been really focusing on that one day for a long run-in.”

For her top eight effort, Anderson was rewarded with a spot on the USA Cycling National Team. She now moves forward into her second season with her new team with some additional recognition from the U.S. cycling support structure.

With her internet working enjoying her time up in the mountains, Anderson and I were able to have a relatively interference-free conversation. We covered the topics discussed here in more depth, and we also talked about love at first sight, her favorite European races and her recommendations for how to adapt to living and racing in Europe.

Our full conversation is available via the embed above, our Soundcloud page and on iTunes.

Next post Trap a Rock Lobster: Donate to California Trail Building for a Chance to Win a New Bike