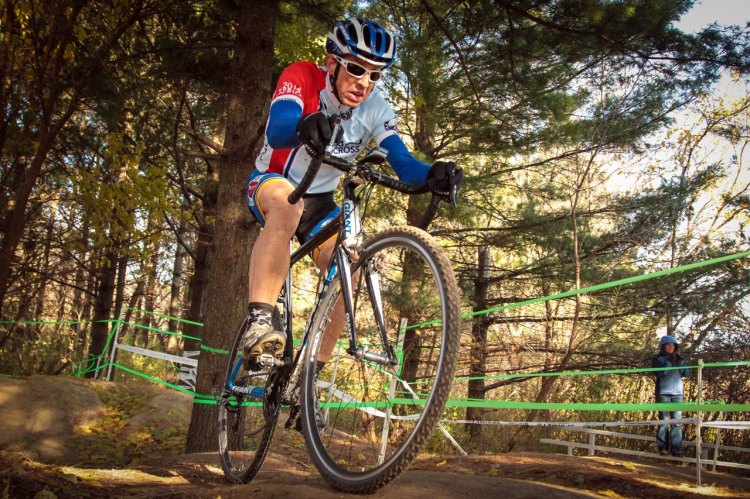 Greg Anderson (South Elgin, IL) on his way to a podium finish in the Masters 55+ race. © Eric Goodwin

Campton Cross marks the midway point of the Chicago Cyclocross Cup (CCC) series and celebrates Halloween by encouraging costumes. In it’s ninth year, this race put on by Bicycle Heaven – Geneva’s premiere bike shop in Illinois – and Rob Kelley’s ROK Coaching, featured a course with half new terrain to keep racers on their toes.

New elements included log jumps, a longer straight away to allow racers a better fight for the hole shot, flowier off-camber sections, a maze of turns cut into a large patch of tall prairie grass (thank you park directors), and a grinding gravel finish. Mother Nature brought the midwestern wind for some proper leg burners. Lucas Seibel (Chicago, IL) – returning from the Single Speed Cyclocross World Championships in Louisville, Kentucky – had a different cosutme for both the Single Speed race and the Men’s Elite race. © Eric Goodwin

Lou has been out with an injury, but the team remains in full force, maintaining the team overall competition week after week. Lou wasn’t the only spectator on the sidelines. Many came out to see the spectacle and plethora of costumes for the annual Halloween race. Danielle Arman (Saint Charles, IL) plays it safe and runs over a log in the Women’s Elite race. © Eric Goodwin

Tricia Fleischer (ABD Cycling Club) returned to the flatlands from the Pacific Northwest to race in the series that introduced her to cyclocross. She lined up for the Women’s Elite race with experience from a famed region for the sport, looking to see where she stacked up against this year’s midwest talent. Danielle Arman (Tenspeed Hero), last week’s winner, started slow and used her road racing tactics to draft off other riders in the first few laps. 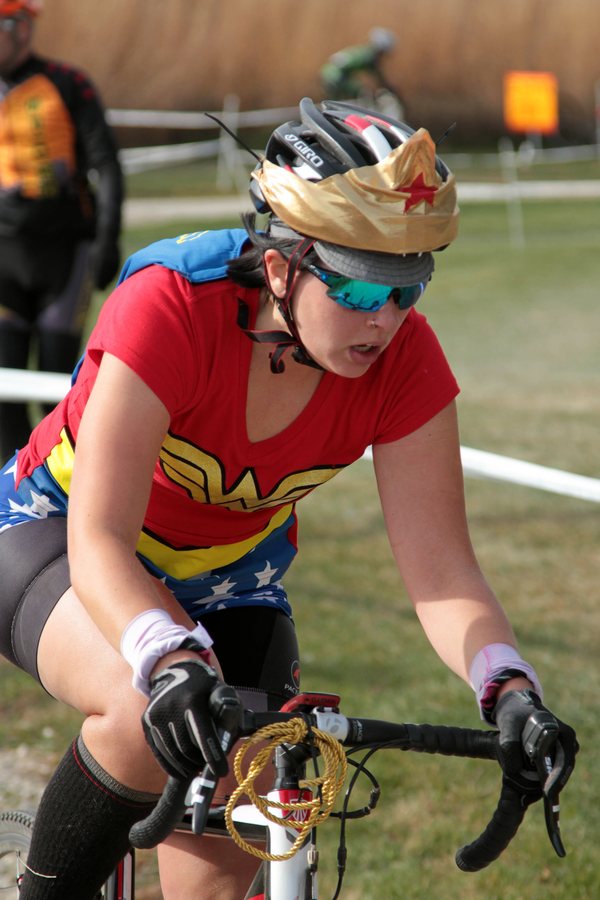 Becky Mikrut (Chicago, IL) has some fun and wears a costume in the Women’s Elite race. © Eric Goodwin

Then she got antsy and went as hard as she could for a lap and a half, earning a forty second lead. For the final laps, she backed off to regain a reasonable heartrate so she could focus on clean riding and listening to her husband’s advice to ‘stay aero’. Arman was able to maintain the lead and take the win. Fleischer finished second and another out-of-towner, Brittany McConnell (Mercy-Specialized) rounded out the podium for third. Joseph Maloney (KS Energy Services / Team Wisconsin) returned from Wisconsin to try and seal a fourth CCC victory for the 2014 season. Kevin McConnell (Mercy-Specialized) from Iowa City, Iowa proved to be an even match for Maloney as the two went back and forth the entire race. Neither seemed to have the advantage in this exciting battle, but on the last lap Maloney was able to pull away on an off camber section that snaked around boulder patches. Maloney was able to capitalize on this slight advantage in the last third of the last lap to take the win. McConnell finished close behind. Mike Phillips (Heritage Race Club) finished third. Kevin McConnell (Iowa City, IA) catches some air in the midst of a heated battle for first in the Men’s Elite race. © Eric Goodwin

While it was the McConnell’s first CCC visit this year, they’re no strangers to the series. They try to make a handful of races every year and appreciate the large fields. The couple stuck around to enjoy their Lagunitas podium perks, courtesy of Verdigris-Village CX. In fact, the top podium finishers all stayed to cheer on the Cat 4 and Cat 5 racers, including Psimet’s Rob Curtis dressed as Helen Wyman. With great improvements being made at every race, participants are excited to move on to the PSI-clocross For Life race in Woodstock, put on by Psimet. Read more about this race, the CCC series, and get some coaching tips from ROK Coaching all at chicrosscup.com.

Next post In the Final Hour, MFG Brings UCI Racing Back to the Northwest