At the 2018 Krawatencross in Lille, a number of top racers lined up looking for a chance at redemption.

For Mathieu van der Poel (Circus Corendon), it was a chance to show his third at the World Championships was simply an ill-timed off day, perhaps partially due to the beginning of an illness that caused him to miss Parkcross Maldegem on Wednesday.

For Laurens Sweeck (ERA Circus), it was another chance to show that his five flat tires at Valkenburg-Limburg kept him from contending for the win.

For Kevin Pauwels (Marlux Bingoal), it was a chance to show that he deserved to be on the Belgian Worlds team.

From the gun, it was clear Van der Poel was on a mission and out to avoid the late-race drama and a Lille Rubbin’ of the 2017 edition. Last year’s race became a must-watch instaclassic, regardless of a bit of mud-induced wheel spin, but Van der Poel was hoping to avoid the exciting five-man last-lap battle that delighted fans.

Van der Poel sprinted out to grab the holeshot and never looked back, putting 10 seconds into a chasing Toon Aerts (Telenet Fidea) on lap one, and increasing his gap by an average of 10 seconds per lap for the next four laps.

Aerts was eventually reeled in by a large chasing group, and then Sweeck gave it go, but it was far too late. Van der Poel was gone and not letting up, despite being in complete control of the DVV Verzekeringen Trofee series overall before the day’s start. German Marcel Meisen crashed going down the flyover, and sat on the descent for a minute to gather himself. Meisen did not finish. 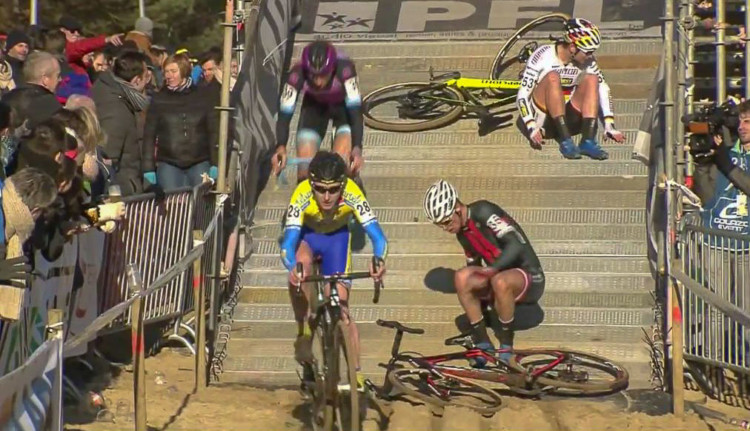