The Elite Men’s race at Krawatencross in Lille, Belgium, gave spectators a series of thrills, as conditions continued to deteriorate (or improve, depending on who you ask). The sand had been packed down from the rippin’ Women’s race, but mud slicks were more treacherous and unavoidable, and the mixed course conditions proved to be quite the challenge for all racers, giving Wout van Aert (Crelan-Charles) particularly noticeable trouble, and setting the stage for a duel with the technical master, Mathieu van der Poel (Beobank-Corendon), in yet another rematch of the dominant duo.

Wout van Aert was quick to accelerate off of the line, hot to trot after the 2017 Cyclocross World Championships, and took the holeshot. Van der Poel was right behind him, avoiding the large crash that occurred in the lakeside corner—the same corner that dashed Sophie de Boer’s winning chances in the Elite Women’s race earlier in the day. This crash caused the field to string out widely, and for the rest of the race, it seemed like there was always a rider in sight at any given point on course.

Many of the muddy corners had been formed into deep and tacky berms, which, combined with the cleared sandbox lines and long power straightaways, created an incredibly fast race. The exceptions to this were the right-hand incline turns into the woods, and some of the windy sections near the lake. Van der Poel, Van Aert, Laurens Sweeck (ERA Circus), Tom Meeusen (Telenet Fidea Lions), and Corne Van Kessel (Telenet Fidea Lions) all ripped through the woody chicane section as the lead five, but Sweeck caught a bar on the fencing in the second to last corner, and was thrown off the back. MVDP was at home and in control in the sand of 2017 Krawatencross in Lille. © M. Hilger / Cyclocross Magazine

At the end of the first lap, it was Van der Poel and Meeusen pushing the pace, with Van Aert five seconds back, Van Kessel 14 seconds back, and a chase group of Sweeck, Vincent Bastaens (Beobank-Corendon), Kevin Pauwels (Marlux-Napoleon Games), and a few others not far behind. Van der Poel was riding like a mad man, dropping his shoulders hard into the tacky corners, and throwing his bike around to solidify his lead. He lost this lead to van Aert and Meeusen after a mishap on the ramp in the woods, but quickly caught onto their wheels. Coming out of lap two, Van Aert was in the lead, but Van der Poel swung around him to reclaim his prime position. By this time, Van Kessel and Lars van der Haar (Team Giant-Alpecin) had worked their way back up, with Pauwels and Bastaens five seconds back, and a larger train of racers not far behind them.

After several shuffles for position, the lead group of Meeusen, Van der Poel, Van Aert, Van Kessel, Pauwels, and Van der Haar committed to hammering, heads down, with one to three bike lengths between each of them. They sped through the ever-growing “puddle,” which was actually the lake encroaching onto the long straight away, as the drizzle turned to a steady rain and conditions rapidly changed. Mathieu van der Poel has been on a tear since Worlds, and was supreme in the sand and woods of the 2017 Krawatencross, Lille. © M. Hilger / Cyclocross Magazine

Van Aert, leading the front group, slipped on the same turn that foiled Van der Haar’s attack, which gave Van der Poel a chance to slip by him and into the lead. Van Aert found a spot to pass, but it was clear that Van der Poel was taking cleaner and faster lines, smashing any chance of a gap.

Pauwels opted for a bike change before the wooded chicane, but did not lose sight of the leaders. At the end of lap four, van der Poel was leading Van Aert and Meeusen, who at this point was easy to spot, his face completely coated in mud. Van der Haar was three seconds back, Pauwels ten seconds back, and Van Kessel was closing in at just eleven seconds back.

After the run-up and sandy turns, Van der Haar launched a menacing attack, screaming down the lakeside straightaway, making Van Aert, van der Poel, and Meeusen look like they were on a pleasure cruise. He faltered a bit, slipping on the muddy turn into the woods, giving the group a chance to hang onto him. Van der Haar continued to dig in, looking over his shoulder repeatedly. Regardless, his constant driving force at the front kept things spicy for van der Poel, Van Aert, Meeusen, and Pauwels, who went into the final lap as a group, trailed by Van Kessel (32 seconds behind), Vanthourenhout (46 seconds behind), and David van der Poel (just over a minute behind).

Van Aert gave Van der Poel a scare not once, but twice. He first slipped on the infamous entrance to the woods, giving van der Poel the opportunity to pass. Then, as Van Aert launched an attack to reclaim his lead, he found a particularly slippery section in the grass, and fishtailed wildly, swinging back straight into van der Poel, who stuck a leg out to keep his balance while miraculously avoiding the fencing. 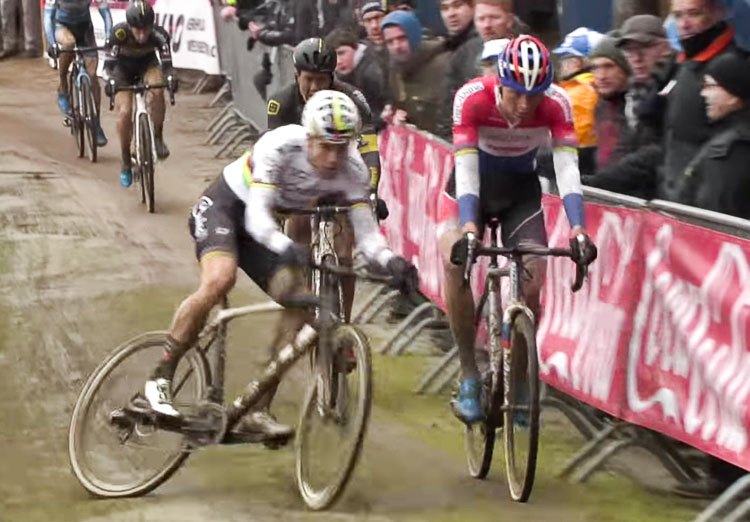 Van Aert managed to take the lead, but Van der Poel, in a clever, aggressive move, dismounted early, cut to the inside of Van Aert, and ran the hairpin. Van Aert was forced off his bike, and Van der Poel had the gap he needed to exact revenge from his defeat in Bieles. Van Aert, Meeusen, Pauwels, and Van der Haar came onto the finishing straight as a tight group, sprinting but not separating, with Van Aert taking second, Meeusen in third, Pauwels in fourth, and Van der Haar in fifth. Americans Stephen Hyde (Cannondale p/b CyclocrossWorld) and Kerry Werner (Kona) took to the start in their continued post-Worlds campaign, with Hyde finishing in 33rd and Werner in 38th. Missed the live video via Trek? Watch the highlights of the men’s race below.