Vanthourenhout Winds His Way Through Leaders for Win: U23 Race at Superprestige Diegem Video Highlights. Updated-Full U23 Results Vanthourenhout enthralled with a win in Diegem. photo: vier.be screenshot

Compared to the Elite Men and Women’s Races, as well as the Junior Race earlier in the day, the U23 race at Superprestige Diegem was one not quite dictated by crashes. The rut at the front end of the course caused a few headaches, including eventual second place Stan Godrie to run nearly off-course, but otherwise the U23 men showed their technical skill before the sun set. Vanthourenhout took the win with Clément Venturini of France, who was in the lead for most of the race, taking the final spot on the podium.
Watch carefully and you’ll be able to see highlights of Curtis White, Logan Owen and Andrew Dillman of the United States. And be sure to stay tuned for the full results once they are released by the UCI.
Also see the Must-Watch 2014 Superprestige Diegem women’s race video higlights here, complete with a bunnyhopping display by Ferrand Prévot, as well as the Junior Race Video with Gage Hecht coming in just off the podium, and read the 2014 Superprestige Diegem Women’s and Men’s race report here.

2018 MontanaCrossCamp Application Open Through May 7 For Young U.S. Women and Men 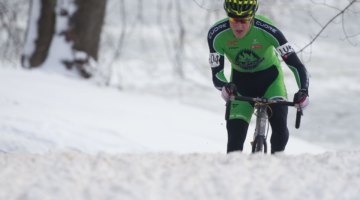