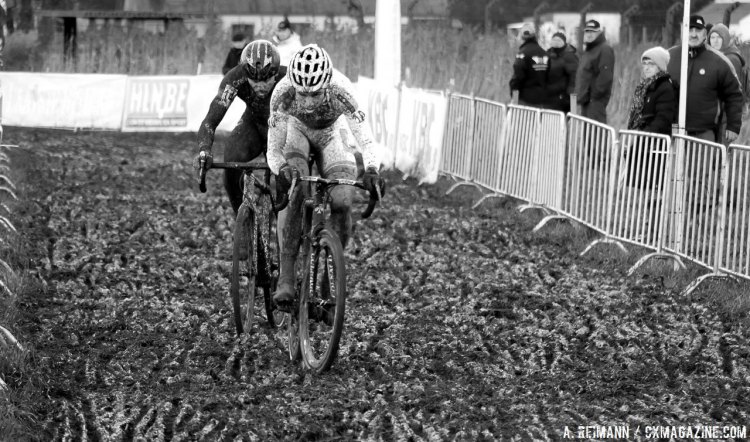 File photo: Wout van Aert, shown here battling with Sven Nys at Koksijde, didn’t give Nys a chance at Flandriencross. He opened a gap on the first lap and held it to the finish. © A. Reimann / Cyclocross Magazine

HAMME, BELGIUM—Wout van Aert, learning from his defeat at Koksijde in a battle for the ages with Sven Nys, wasted no time taking to the front of the race at Flandriencross, the third race of the Bpost Bank Trofee series. Van Aert steadily grew his early-race advantage to cruise in with the solo victory, 18 seconds up on Nys.

As the gun went off, Lars van der Haar (Giant-Alpecin) got the jump on the field, taking the holeshot and stringing out the field. An early crash took down Belgian Champion Klaas Vantornout (Sunweb-Napoleon Games), who would never recover from the misfortune.

Wasting no time, van Aert quickly navigated to van der Haar’s wheel, and the two developed a slight advantage. In his second race back from injury, World Champion Mathieu van der Poel (BKCP-Powerplus) was shuffled back with Nys and was sitting around tenth place.

Sensing the opportunity, van Aert used van der Haar’s aggressiveness as a launching point, and went on the attack early. Van Aert’s pace was too much for van der Haar, and one lap into the race, van Aert was solo.

An excellent runner, along with possessing the necessary power to thrive in the mud at Hamme, van Aert’s gap continued to grow. A chase organized, featuring Nys, van der Haar, van der Poel and Kevin Pauwels (Sunweb-Napoleon Games), but they were unable to eat into van Aert’s advantage.

With four laps to go, Nys went clear from the chasers, attempting to go on his own to van Aert.

Ultimately Nys’ effort would be in vain, as aside from a bobble with two laps to go into the flyover stairs, van Aert rode a technically-excellent race, keeping the rubber side down on the muddy course.

Van Aert was comfortable enough with his gap to take a clean bike on the last pass by the pits and would finish 18 seconds up on Nys.

In the chase, Pauwels had distanced van der Haar and van der Poel, and rolled across the line in third place, 1:04 down on van Aert.

Stay tuned for full results from Bpost Bank Trofee Flandriencross, and be sure to check out our Elite Women’s race report, where Helen Wyman out-handled Sanne Cant for the win.