October 28 (Boulder, CO)   Organizers of the Boulder Cup cyclocross race have announced a change of location for the annual event scheduled Sunday November 1.  The international caliber race has been relocated to The Boulder Reservoir replacing the south Boulder location at Harlow Platts Park.

The fall storm that has blanketed the Front Range of Colorado with a heavy layer of wet snow on Tuesday night and Wednesday forced the decision on City of Boulder and event organizers in an effort to avoid damage to the turf at Harlow Platts.

Race director Chris Grealish described the move as the best alternative given the fragility of the turf at Harlow Platts, “The racers love Harlow Platts because of the challenging nature of the grassy terrain but we have an agreement with the City of Boulder to make a move if conditions there risk long-term damage to the park.”

The schedule of events for the event remains unchanged with racing takes place all day beginning with local amateurs at 8:00 am.  The professional men and women race during the afternoon beginning at 2:30 with the Elite Women followed by the Elite Men at 3:20.  A complete schedule is available at www.crosspartners.net

Cyclocross has become the biggest spectator draw in competitive cycling and is the fastest growing segment of cycling in the U.S. eclipsing road and mountain biking.  It combines the speed of road bikes with the terrain of mountain bike events as racers compete on bikes that resemble road bikes with slightly wider, knobby tires.  Most of the racing is off-road and riders must hop off the bike for barriers and uphill sections while shouldering their bikes.  Unlike longer road races, cyclocross races are short one-hour events that are combine intense action with great spectator viewing.

Previous post Koppenbergcross - Racing Is Only Half the Fun! - A Column by Christine Vardaros 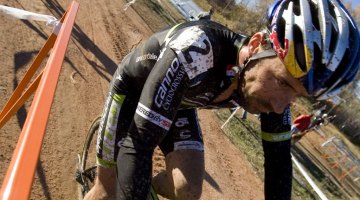