Stop two of the Qiansen Trophy in China was in the Yanqing District of the Beijing suburbs on Wednesday. Riders who made the long trip to China were rewarded with a second opportunity to vie for big UCI C1 points. Sunday’s two races went to two Belgians, Joyce Vanderbeken and Yorben Van Tichelt, and the duo sought to make it a perfect trip on Wednesday. Vanderbeken came into the weekend ranked just outside the top 30 and Van Tichelt just outside the top 50, so Wednesday’s race provided them with a golden opportunity to move up in the UCI standings and pick up wins for their respective Stevens Pro Cycling – Donen/Vondelmolen CX and ERA-Circus teams.

The course in Yanqing was similar to previous years with an L-shaped layout that made for fun riding, but difficult spectating because the long course took riders out far from the start/finish for much of each lap. The track featured a few sets of stairs, some bumpy sections through the woods and scenic views for riders to take in at 190 beats per minute. After the race, American Serena Gordon (Giant Factory Off-Road Team) said she enjoyed Yanqing layout, “I think today’s course was the most fun cyclocross course I’ve ever ridden.” The mid-week race also brought hotter conditions than what riders experienced on Sunday.

Sunday’s race finished as a slugfest between Joyce Vanderbeken (Stevens Pro Cycling – Donen/Vondelmolen CX) and Americans Serena Gordon and Emily Kachorek (Squid Bikes), and Wednesday’s proceedings played out in a similar fashion with ultra-close racing. Even with jet lag and a new culture, UCI C1 points would have to be worked for. 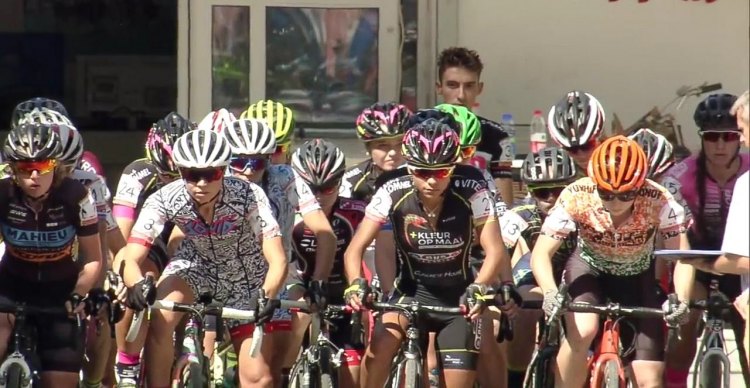 The race started fast and a lead selection of five that included Kachorek, Samantha Runnels (Squid Bikes), Dutch rider Geerte Hoeke (2WCBeuningen – MTB Licht Verzet), Gordon and Vanderbeken broke out early on. The first half of the race was highlighted by continuous lead changes. During the first lap, Vanderbeken and Hoeke took turns at the front, and then during lap two, Gordon took the singletrack section as her cue to try to get away off the front. Serena Gordon takes her turn on the front of the race early on. Qiansen Trophy – Yanqing. photo: screen capture

With their iconic Squid skinsuits, it was easy to tell that Kachorek and Runnels had the numerical advantage in the lead group, and when Kachorek pulled to the front in lap three, it appeared the two may have been ready to get some practice working together early in the season.

During the fifth of six laps, the group of five shrunk to the ultimate selection of Vanderbeken, Gordon and Kachorek. On each of the last two laps, Vanderbeken grabbed the lead by taking an inside line leading into one of the sets of stairs and outmaneuvering her two American rivals. The second of these deft moves gave her the lead and she was able to hold off Gordon and Kachorek, who finished one and four seconds back, respectively. Hoeke outlasted Runnels in the chase and American Daniele Arman (Tenspeed Hero) came roaring back to nip Runnels and take the fifth spot. The Women’s race was tight throughout and Joyce Vanderbeken made her move at the stairs. Qiansen Trophy – Yanqing. photo: screen capture

After the race, Kachorek said the narrow gaps meant the race would go to the rider who stayed perfect, “This race course was fantastic,” she said. “There was a lot of back and forth, until the last 500 meters we didn’t know who would win, any mistake could have cost the victory.”

On Sunday, Yorben Van Tichelt (ERA – Circus) had to work to get to the front after getting caught behind an early crash. In Yanqing, he looked determined to not leave his chances to fate and quickly moved to the front of the race. Despite Van Tichelt’s move, it appeared the affair might play out like a typical second day of a UCI weekend as a giant group of eight marched one-by-one through the woods. Van Tichelt, however, had other plans, and he continued to apply pressure at the front. At first, only Marcel Wildhaber (SCOTT-SRAM MTB Racing) was able to match the Belgian’s hot pace and the two created a gap off the front. One rider who was determined to make his mark in Yanqing was Yu Takenouchi (Japanese Select Team). Takenouchi headed up the chase group of four and by the start of lap five, he had dragged several riders back to the leaders to create another massive group of seven.

With the catch made, the middle of the race again took on the vibe of a group ride affair. Anthony Clark popped off the back in lap five and the group was down to six, but the sense of urgency from earlier in the race was missing. Italian Lorenzo Samparisi (KTM ALCHEMIST SELLE SMP DAMA) also made a cameo appearance on the front during lap six as the racers got ready for the last third of their Chinese workcation.

The lull would only last so long before Van Tichelt went back on the attack. The Belgian ripped to the front and only Wildhaber and Thijs van Amerongen (DESTIL-ZZPR.nl) were able to go with him. For a while at least. Van Tichelt kept going and his two rivals were unable to match his pace. When the literal and figurative dust settled from lap six, Van Tichlet had opened up an eight-second lead and it was clear Wildhaber and Van Amerongen were likely resigned to battling for second.

Van Tichelt kept his gap to about ten seconds for the remainder of the nine-lap race and took the victory seven seconds ahead of the chasers. Wildhaber outlasted his Dutch competitor to grab his second silver of the China trip and Van Amerongen took bronze. The ride of the afternoon went to Takenouchi, who finished fourth. Samparisi finished fifth. Anthony Clark (Squid Bikes) was unable to repeat his podium performance, but he did come away with another UCI top ten with a seventh-place finish. Carl Decker (Giant Factory Off-Road Team) finished just outside the top 10 in 11th. Van Techelt said he was pleased with his afternoon. “I had a good start, I felt better and better,” he said. “I tried to attack with one big attack, and it proved to be the right one. Marcel and Thijs were really strong. ”

Wildhaber also said he was pleased with the outcome of the tough afternoon of racing. “The race was totally different [than the first one], with a big group.,” he said. “Yorben attacked really hard, I tried to chase him back, but on the last lap, I really suffered. I went all out to the finish line, I’m super happy with second place. Overall I made more points than last year.”

UCI racing begins in earnest this weekend with the UCI weekend in Rochester, New York and the Brico Cross Eeklo race in Belgium on Sunday. Stay tuned to Cyclocross Magazine for coverage of UCI racing throughout the 2017/18 season.