Jesse Anthony and USA Cycling were busy supporting young riders at the 2019 Jingle Cross World Cup. He shares what he has been up to as Cyclocross Manager. Jesse Anthony is returning to his ‘cross roots at the new USA Cycling Cyclocross Manager. We spoke with him about his new role and plans for the position. 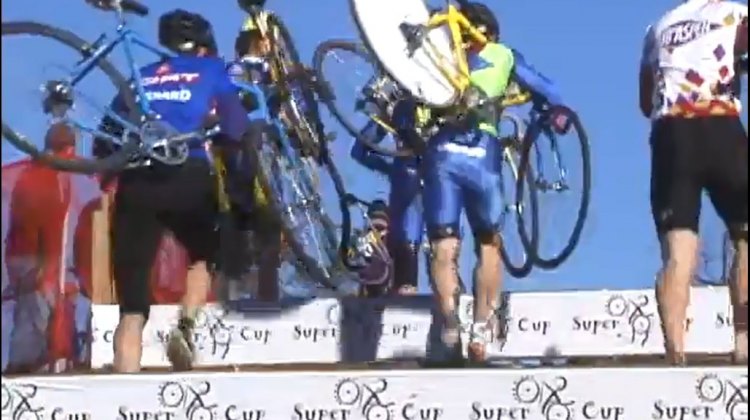 For the third week in a row, our #tbt looks at the 2000 at Gloucester, MA with a video of the Saturn Supercup posted from … The New England Holy Week of Cyclocross has begun! The kickoff event, Midnight Ride Cyclocross hosted by the Minuteman Road Club at the Lancaster Fairgrounds … As many of you know, Jesse Anthony has announced that after Gloucester’s race this year, he will be retiring from cyclocross to pursue road racing as his main sport. After the summer he’s had, we can’t say that we blame him, as he’s had some amazing finishes and wins, winning Nature Valley overall to name just one. But we will miss him in cyclocross. Issue 15 will include a reflective piece from Anthony as well as a look back at his superlative cyclocross career. Wow, mid August is upon us and that can only mean one thing, pulling out the practice barriers, heading to the local park and getting our hup on! With that, Jesse Anthony has certainly been getting his HUP on at the Tour of Utah, can he take the points jersey? Johnson and Wells head high to attempt to race 100 miles above 10,000 feet. Amy Dombroski has been productive and looks to be on track with her ’cross program. Daphny Van Den Brand has announced her retirement after the 2011–2012 racing season, can she do the triple? In this week’s working man’s edition: Tristan Schouten and Brian Matter head to the first round of the Midwest Triple Crown, The Ore to Shore. Only today’s stage is left in the Amgen Tour of California. With our dwindling group of cyclocrossers down to only six, who will be the … As the Amgen Tour of California begins to wind down, with only a weekend of racing to go, riders are beginning to make their moves …

by Kat Statman It’s time to really start thinking about ’cross season, maybe even starting to glue up some tires if you haven’t already. Now … In Stage 5 of the Amgen Tour of California, racers covered 135 miles and climbed nearly 10,000 ft. After the long haul, Jeremy Powers tweeted … Amgen Tour of California: Stage 4, Cyclocross Style (and a Bit of Giro)

Stage 4 of the Amgen Tour of California saw some of the first King of the Mountain climbs, and cyclocross racer Lars Boom (Rabobank) emerged … With rain and a strong headwind, Stage 3 of the Amgen Tour of California had perfect conditions for our cyclocross contingent to shine. Stage 4, …

As Stage 2 in the Amgen Tour of California came to an end yesterday, there was a herd of cyclocross racers, including Andy Jacques-Maynes, Chris …

by Kat Statman Week in, week out, there’s racing to be had around the world where we can catch up on what ’crossers do in …

Many cyclocrossers and fans have attempted to recognize the results of cyclocrossers as they attempt to battle pavement specialists. We did so during last year’s …

by Kat Statman Sometimes it’s really hard to remember that we live and die for cyclocross, especially during the spring classics season, but Greg Keller … by Mark Vanderbacon To celebrate the 10th edition of what has been called the toughest ’cross race in North America, the Delaware Cyclocross Coalition of … Junior development is an important aspect of all cycling disciplines. As ’cross becomes more popular, the need to develop the youth of the sport will … by Josh Liberles The top 20 of the second annual Beverly Gran Prix Criterium reads like a who’s who of New England cyclocross. When reigning … by Robbie Carver “Only managed 30th in the TT on my road bike…” tweeted Ryan Trebon about his performance in the Cascade Classic Time Trial. … by Josh Liberles Short circuits, intense efforts, handling skills and plenty of accelerations. The similarities between criteriums and cyclocross races have always run deep, but … Eavesdropping on the US ’Cross Scene – Spring 2010 Update

While the glow of the 2010 cyclocross season has not yet faded, most of cyclocross’ elite have settled into their off-season road careers. None have … Jesse Anthony Reflects on His Season

by Jesse Anthony The 2009 cyclocross season is completed, and I am taking the next few weeks to digest everything that’s happened this year.  My …

by Jamie Mack Seven-time cyclocross National Champion Jesse Anthony is living the ‘cross dream.  After rising through the ranks as a junior and espoir, the …

One to Go – A Column by CX Pro Jesse Anthony

Jesse Anthony has been racing ‘cross for ten years and has won an impressive seven cyclocross national championships. Not content to be only a subject …

Jesse Anthony, the current USGP leader, has been racing ‘cross for ten years and has won an impressive seven cyclocross national championships. With such a …