One to Go – A Column by CX Pro Jesse Anthony

Jesse Anthony has been racing ‘cross for ten years and has won an impressive seven cyclocross national championships. Not content to be only a subject of our rider diaries, Jesse rounds out the current crew of Cyclocross Magazine columnists with his PRO-perspective column. His first column was on his early season surprise form.

Well the US Grand Prix wrapped up this weekend, and the North American Cyclocross Trophy finished in Long Island a few weeks ago, so there’s only one more race to go. The US national championships in Kansas City are coming up this weekend and that will be the end of the ‘cross season for me. It was so short, but for some reason I’m ready for it to be over. One to go! photo: Janet Hill

Historically nationals has been one of my favorite races and definitely the most important race to me all year. Last year I tried to capitalize more on some other races during the season, and this year I wanted to be consistent all the way through as well. I can’t say I was successfully consistent this year, in fact I feel like that’s the one thing I have to work on most for next year. I’d love to go to nationals this year and have a season-defining race, but I know I can’t count on that from a results standpoint. What is in my control is how I race, and I am determined to satisfy myself with one last larger-than-life effort. It’s not really going to matter to me where I finish, as long as I can look back on the race and know that I did my best.

So looking back over the last few weeks, I had a solid weekend in the NACT final in Southampton, NY. That has always been one of the most fun weekends of racing during the year, and this year was another fun time. After that I had a very relaxing Thanksgiving and a few days off over that weekend. That helped me hit the reset button and get ready for the USGP in Portland and nationals. I had a great ride in Saturday’s USGP, but I had a really tough day on Sunday. It’s been tough trying to digest the weekend, but I have one more week to work on things and then I’ll get a few weeks off to chew on everything that’s happened this fall. 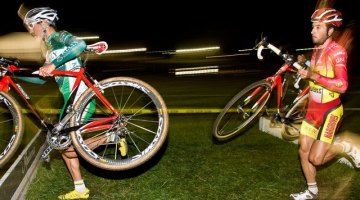