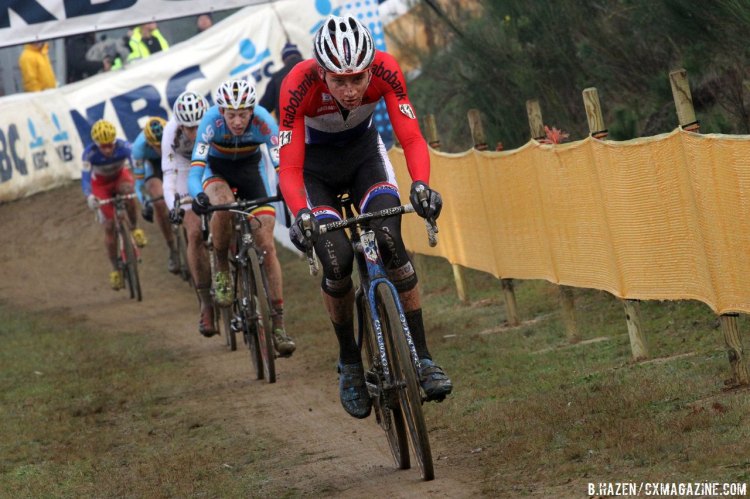 Van der Poel and Vanthourenhout bide their time a little too long in the race as Sweeny increased his lead. © Bart Hazen/Cyclocross Magazine

As the leaders crossed the line for the third time, Laurens Sweeck decided it would be the perfect time to launch an attack  at the Heusden-Zolder World Cup.

Apparently, no one agreed with him. Michael Vanthourenhout, Mathieu van der Poel and Wout Van Aert took turns at the front of the chase group, but they were more playing off each other rather than hunting down Sweeck, who would eventually go on and take his first World Cup win. World Cup U23 series leader Van Aert would follow behind 24 seconds later, and Van der Poel finished third over a half-minute behind second. 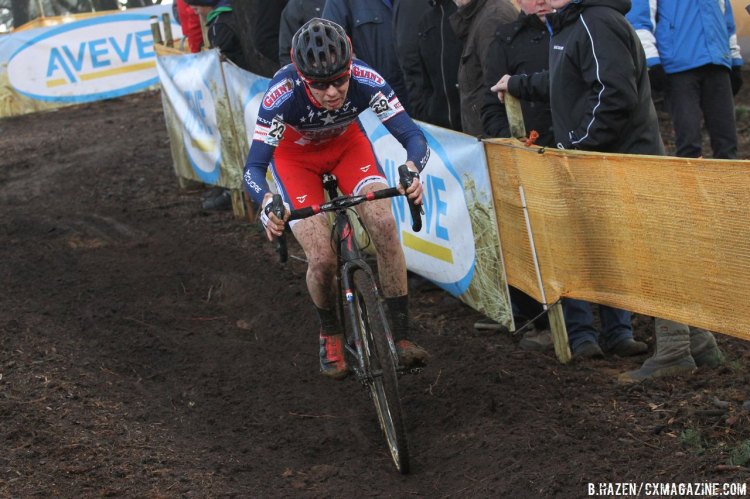 Once again, Logan Owen lead the Red, White and Blue in the U23 race. © Bart Hazen/Cyclocross Magazine

Logan Owen led the Americans in the U23 race, taking 23rd. Andrew Dillman followed right behind in 24th, with Todin Ortenblad taking 26th and Curtis White right behind in 27th. Skyler Mackey got 39th while Sam O’Keefe came in soon after in 40th. Iserbyt, Dekkers and Gulickx made up the Junior podium. © Bart Hazen/Cyclocross Magazine

Eli Iserbyt, leader of the overall series, won the Junior Race, with Jens Dekkers and Max Gulickx following him for second and third. Johan Jacobs, the winner at Namur, was unable to repeat his success, and came across the finish line right off the podium. Gage Hecht proved his mettle yet again this season by taking fifth. Cooper Willsey was the second American, who came in for 16th, and Lance Haidet followed for 23rd. Gavin Haley took 26th, Spencer Petrov took 34th, and Cameron Beard gathered 36th out of a large field of 60 racers.