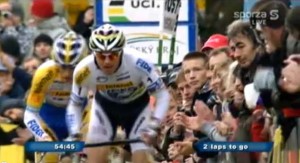 Plzen, Czech Republic – Czech World Champ Zdenek Stybar (Telenet-Fidea) and Dutch star Sanne van Paassen (Brainwash) continued their strong seasons with victories at the second UCI Cyclocross World Cup stop in Plzen, the Czech Republic. Van Paassen battled Daphy van den Brand (ZZPR.nl) for the win, escaping with her compatriot and then beating her by 16 seconds for the victory, while Stybar rode away from teammate Kevin Pauwels (Telenet-Fidea) when the Belgian flatted coming into the final lap of the race.

The course, which featured a steep fly-over, a maze-like tangle of tight turns and a difficult set of stairs that often slowed riders to a walk, was relatively dry, despite rains early in the day. In the wind, the race quickly fractured into groups, with van Paassen reaching van den Brand near the end of the first lap, while behind them Nash, Kupfernagel and Czech racer Pavla Havlikova tried to close the gap to the leaders.

Kupfernagel ran into trouble early and quickly faded from the lead group, while Nash found herself isolated after pulling clear of most of the race, but failing to reach the two leaders. Van den Brand, meanwhile, did the bulk of the work in the wind, pulling van Paassen away from the chase behind. The young Dutch racer sat comfortably on her countrywoman’s wheel until the two hit the stairs about 25 minutes into the race. Van Paassen quickly opened a lead of several seconds, which a tired Van Den Brand was helpless to close.

From there, van Paassen was untouchable, and she rode to an easy-looking 16 second victory which, in the absence of World Cup leader Katie Compton (Planet Bike), left the two Dutch riders tied for first in the World Cup overall. Katerina Nash took third, and Pavla Havlikova held off Britain’s Helen Wyman for fourth. Sue Butler was the top American finisher of the day with a 14th place, while Amy Dombroski finished 19th and Christine Vardaros 30th. Vardaros told Cyclocross Magazine afterward that she had battled an asthma attack throughout the race.  “I was blown off the course a couple of times,” she said, of the day’s blustery winds.

Men’s Race
In the men’s race, it was the Stybar show for the seventh time this season as the World Champion stretched a season-long undefeated streak for another week. The Czech was in control of the race for nearly the entire duration, quickly joining forces with a resurgent Niels Albert to grab an early lead while the German Christoph Pfingsten took center stage at the front of the chase behind them. Pfingsten, a relative unknown, led a who’s who of cyclocross, pulling Sven Nys (Landbouwkrediet), Francis Mourey (Française des Jeux), Klaas Vantornout (Sunweb-Revor) and Dieter Vanthourenhout (BKCP-Powerplus) among a crowd of strong riders.

But Pfingsten’s time in the spotlight was short-lived, as he quickly fell back when the field hit the stairs at the end of the first lap. (Disaster would visit the young German later in the race when a broken chain would effectively end his day half-way into the race.) With Pfingsten gone, Nys took up the chase, while Belgian Kevin Pauwels made his way to the front of the chase group. Pauwels kept the pressure on, quickly surging past Nys, who latched onto his wheel momentarily before falling back to the chase. Pauwels, however, only went forward, and joined the two leaders during the third of the race’s twelve laps.

The three leaders traded pulls while the chase group was whittled down behind them. Radomir Simunek came off the pace first, eventually abandoning the race, then Vanthourenhout cracked and fell back, leaving Nys, Mourey, Bart Aernouts (Rabobank) and Klaas Vantornout to drive the pace. But the chase could do nothing to make up ground, as the three leaders continued to gain time.

Finally, with three laps to go, Stybar launched the first real attack of the race, quickly pulling away from Niels Albert. For the next two laps, the two Fidea teammates took turns up front until a flat tire took Pauwels out of contention with one to go. Stybar cruised around the course alone, finishing with plenty of time to revel in a win on home turf, while Pauwels would hold off Niels Albert for second place. Mourey managed to outkick Nys for fourth.

After the race, Stybar told reporters he was lifted by a large and very supportive home crowd. “Today the crowd was really incredible,” he said. “I think that today I probably enjoyed the most of any race this season, because the crowd was really excellent. I would like to thank all the supporters and the crowd here in Plzen.”

Stybar, who remains one of the most magnanimous racers on the pro circuit, told reporters he was sorry to ride away from his teammate because of a flat tire. “On the last lap it was just a pity that my teammate Kevin Pauwels had a flat tire at the beginning [of the lap]. But at that moment I decided to ride really as hard as I could because that was my chance to make a gap and come alone to the finish.”

Stybar added that his training this week had specifically prepared him for racing in the fierce winds he faced in Plzen.  “You know, the finish [stretch] was really very tough because the wind was [a headwind],” said the world champion. “But you know, I had specific training for this road. On Friday I was really suffering in the training, but today I used it really [well] because three or four times I really [put other riders into some difficulty].”

Jonathan Page, the only American in the race, apparently struggled with serious back problems throughout the effort, finishing 46th.

Relive the entire race with our blow-by-blow live coverage below the results, and check out this highlight video!