Like Caroline Mani, Tobin Ortenblad defended his Sea Otter cyclocross race title at the 2016 Sea Otter Classic last month. But, for Ortenblad, the reigning U23 National Champion, it was aboard a new bike and in new kit.

With the disbanding of California Giant and Ortenblad's move to the Elite ranks Ortenblad is now on Santa Cruz's Stigmata cyclocross bike, which we've reviewed previously, rather than the Specialized Crux we and others had become accustomed to seeing him on. And, given too that last year was Ortenblad's last as a U23 rider, not only was he not in the familiar colors of Cal-Giant racing in Monterey, California, he wasn't in his National Champion Stars and Stripes jersey. Rather, Ortenblad donned threads from his current road and gravel sponsor, Donkey Label.

"Donkey Label got my jersey designed, stitched up and sent to me in less than a week," said Ortenblad when asked about his new threads. As for the bike, it was a demo from Santa Cruz. "It fit perfect and their stock builds are so nice I didn’t really have to switch anything to have it 'race ready,'" said Ortenblad. (You can watch our post-race interview with Ortenblad here.) Indeed the stock Stigmata build from Santa Cruz is pretty nice. The full carbon frameset features a press fit 30 bottom bracket and a winning geometry allegedly inspired by frame builder legend Paul Sadoff of Rock Lobster Cycles. While the frame has a 142x12mm thru axle, the tapered carbon fork is outfitted with a 15mm thru axle. And like we noted when we first reviewed the bike, the frame and fork offer generous tire clearance, great for those looking for a do-it-all cyclocross/gravel race bike.

Ortenblad's bike build is pretty straight forward. The drivetrain is a SRAM Force 1 kit, complete with a 42 tooth X-Sync ring up front. Each of the cockpit components comes from Zipp, with the company's alloy Service Course SL stem, bars and seat post. Zipp also provides the wheels, in the form of the its 30 alloy disc offering. Ortenblad was running tubeless at Sea Otter, but not just any off-the-shelf tire. Ortenblad himself mounted up Clement's new MXP tubeless tire prior to the race, reportedly the first pair in the US. To round out the build Ortenblad runs a WTB saddle and Crank Brothers Candy 11 pedals. When asked if he would run the same bike for upcoming gravel races, like the Lost and Found which he won last year, Ortenblad said that "I’ll be on an orange [Stigmata]. The biggest differences will be the tires and cassette. I’ll throw on the Clement X’PLOR MSOs in a 700x36 and rock those tubeless. As far as the cassette goes, I’ll keep the bike setup with a 1x setup and will have a 10x42 cassette in the back. This makes the 1x setup capable of anything. I’m still not sure which front ring I’m going to run yet." We were also curious why Ortenblad elected to race Sea Otter, as many other riders opt to skip the April event. Ortenblad said that the cyclocross race was the only event he did at Sea Otter. "It’s super early in the season so I wasn’t really ready to start racing road at that point," said Ortenblad."

"For me Sea Otter Cross is a cross race that’s close to my house and has really good competition. Those two alone are enough for me to go out and race. I do wish more of the big guns would race, most of them are already in Monterey for the event anyways. Wouldn’t be too hard to put on a kit and go race a cross bike for less than 60 minutes."

With early season cyclocross races really not that far off, we asked Ortenblad about the two World Cup races here in the US and the attendant UCI races at Jingle Cross, and what is plans were for making the most of UCI points on offer early on. "It's a good [question] and I’m not really t0o sure at this point. Getting a bunch of points early in the season is pretty crucial in the USA because our racing starts to fall off towards December. That being said [those World Cups are] also a special opportunity to do well on home soil and not have to deal with jet lag and travel fatigue. If I can get some good points prior to those races, although they’re pretty much the first races of the year, I’ll probably put all my focus into the World Cups." 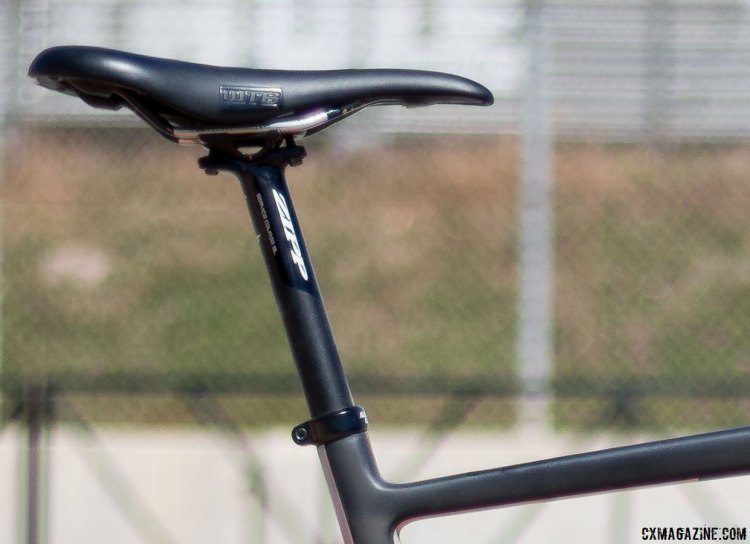