Ryan Trebon Talks Worlds: “It’s never a good thing when you see people running away from the fences” 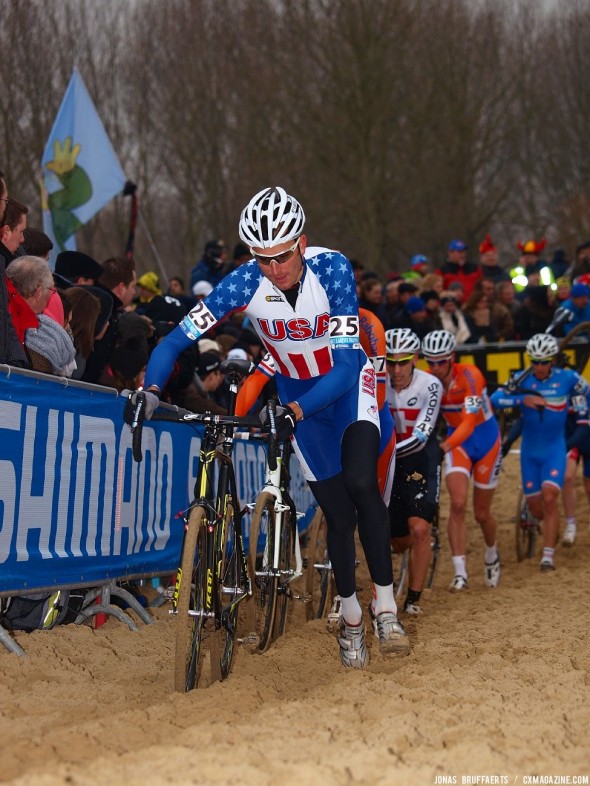 Ryan Trebon was the best placed American on the day. © Jonas Bruffaerts

While Niels Albert might have taken the overall title, Ryan Trebon took the top American spot at the Cyclocross World Championships in Koksijde this weekend, in 18th place. Following a second place at US Cyclocross Nationals, Trebon has clearly proven to the world that he’s not only recovered from an injury that sidelined him for almost two months of the season, but that he’s back and stronger than ever.

We caught up with Ryan a couple of days after the race to hear what he thought about the course, the race and Worlds 2013.

Ryan Trebon: I love the course, I have raced there before two times before,  but not on the new course. The old one was more of a normal ’cross course with sand sections,  the new course is sand, pavement, and then more sand. The sand plays such a huge role in the new course.

RT: I felt very good, I was definitely nervous and anxious before the race, but my legs responded really well during the race.

RT: Honestly? I was a bit overwhelmed and nervous during warm up. There was never a section or a moment where you were alone and could think clearly about what you were doing and what section was coming up. It was just people, people, and more people the whole way around. But once the race started I didn’t even notice the crowd at all. I just put my head down and did my best for 70 minutes. RT: Every time you don’t win, you always want more from the race, but I think I rode a decent race, all things considered.

RT: The hardest part was just riding clean laps,  I think maybe I did two of 10 laps without mistake. The rest of the time it was just a small error here and small error there, and you are down 20 seconds a lap to the leaders.

RT: Nothing spectacular. But I think I did almost kill myself and a few spectators when I took a bad line and went straight for the barriers. It’s never a good thing when you see people running away from the fences.

RT: Tired, for sure. It’s a stressful day and week building up to the World Championships. I was really glad for the weekend to be done with.

RT: I plan on riding my dirt bike and going skiing with my dog Frank.   That’s the two things I enjoy the most and miss out on doing during the winter months.

RT: Not so much, but I think riders like Wellens, Berden, and Peters have good idea of the stress and fatigue levels you have to deal with traveling overseas. If Nys is serious about not coming to Worlds, I think that is a big disappointment and mistake,  he talks about globalization of the sport all the time to help growth, but maybe he just talks and doesn’t act on it.

RT: It was a good season for sure, Dusty and myself went out on a limb (along with our sponsors) and worked very hard to get ready for the season. The crash in Louisville was a setback,  but I did my best to get ready for Nationals and Worlds and I think I had respectable races at both.

CXM: Are you happier with your Worlds result or Nationals result?

RT: I am honestly not really happy with either. Once you have won Nationals, that’s the only thing that matters,   I have five second places and two firsts in the last eight years. I wish it was the other way around. Worlds was good, but not quite good enough. I want us in the USA to be more competitive as whole at the World Championships.

CXM: Thoughts on the Belgians taking over the podium? Think it’ll be different on a different course next year?

RT: People were complaining that it was an extreme course and that it favored the Belgians too much. I come from the idea that I would rather win a race when all the odds are stacked against my favor than when they are, just too prove that I truly deserve to win. A good ride over here when things are the toughest would be the most gratifying. I think the level of competition at Worlds will be high no matter where in the world the race is held. I don’t expect a huge change for next year’s race.

Next post Talking Worlds and the Season With Nicole Duke: "I exceeded my own expectations"