Tom Ritchey and his Ritchey Logic company have been in the mountain bike (and cyclocross) pedal game for as long as anyone, other than Shimano and Look, offering SPD-compatible pedals shortly after Shimano launched its successful SPD line.

The pedals varied over the years in Shimano cleat compatibility, weight and durability, but often the story was, as is often the case with some Ritchey components, weight savings. The Ritchey Logic Pro Paradigm pedals (see our review here) weighed just 254 grams, which is a good 100 grams lighter than some Shimano options.

Ritchey’s Paradigm pedal platform never quite took off despite that weight savings story. Shimano’s most recent XT and XTR SPD pedals have focused more on contact area and shoe stability and Ritchey is now headed in the same direction. Ritchey also fixed the front claw, or bale, of the pedal, unlike the pivoting front bale featured on the Paradigm. The new changes are said to lower stack height (cleat-to-axle distance), increase stability and still offer great mud shedding.

Mountain bike star Nino Schurter and his Scott Oldo team have been involved in the development of this pedal and raced on it all last season as they chased World Cup victories.

The WCS XC pedal shown here features two bearings (middle and outer) and one bushing (inner), and is completely serviceable with an hex key. Although it looks titanium in color, it’s not, it’s just the finish. The WCS XC body is alloy, the claws are steel, and the axle is cromoly. The list weight is 12 grams less than the M9000/M980 XTR pedal at 298g, almost 50g heavier than the previous Paradigm model. The pedal retails for $149.95 and is available now. They will also be available in a Comp level version soon. Stay tuned as we get our hands on a set for testing. Specs below. 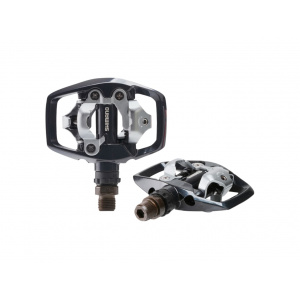 Previous post New Gravel and CX Tires: Where the Rubber Meets the All Road - NAHBS 2016