“Which bike did you enter into Best Cyclocross Bike?” we asked Chris McGovern.

“Caitlin’s bike, but it won’t win,” McGovern said as he pointed to Caitlin Bernstein’s cyclocross race bike from last season. The bike has won plenty of races, but hadn’t yet taken a crown in a judging contest. On Saturday in Sacramento, according to the NAHBS judges, much to McGovern’s surprise, his bike crossed the line first.

Arguably Chris McGovern’s bike building career started at the age of 15 when he rode a Della Santa road bike built by Roland Della Santa in Reno, near McGovern’s hometown of Nevada City. McGovern said that bike changed his life when he realized what a great bike could ride like.

To McGovern, it was serendipitous that his booth was adjacent to Della Santa’s. Just like Della Santa’s, his riding background is in racing. McGovern raced professionally with pro teams such as Zaxby’s, Jelly Belly, Health Net, and Sierra Nevada. He realized he disliked his sponsor’s bike and wanted to make and ride something better.

After college, he raced with Paul Sadoff’s Rock Lobster team, and learned bike fabrication when Sadoff encouraged him to take a UBI course in titanium. 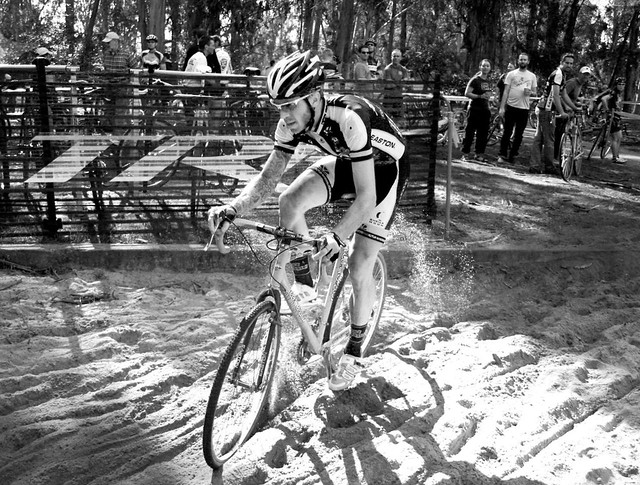 He came back and over a few years gravitated to carbon bike fabrication with the help of David Bohm of Bohemian Bicycles.

Building for Others, and the Market

McGovern has won races on each category of bike he built, including titanium, then fillet brazed steel and lastly carbon. After offering titanium, then steel, then carbon bikes to the market, he found his custom carbon creations to have the best chance to break away from the pack and capture potential customers’ attention. He surprisingly doesn’t ride as much now, but competes in long-distance running and concentrates on making beautiful carbon bespoke bikes and supporting bike racing with Cycleution Coaching, coaching athletes like Tobin Ortenblad and Rebecca Fahringer. He is also the force behind such events as the Lost and Found Gravel race. McGovern fabricates every element of his carbon creations including some tubes, which are either wound or bladder molded depending on the application. He still builds in titanium and steel and even combines materials. McGovern thanks NAHBS for bringing his fabrication into the spotlight. His bikes are often sought out by industry veteran’s as personal rides, and we saw a bike he made for HiFi Wheels co-owner Robbie Douanpanya with a unique New Mexico turquoise paint job by John Slawata of Land Shark Bicycles. Enjoy a look at McGovern’s creations below, and stay tuned for plenty more from NAHBS 2019.

Previous post Gravel Results: An Even Faster Year at the 2019 Land Run 100