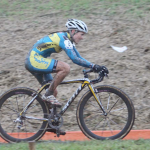 I am feeling much more positive right now after a good race this week at Niel. I have had a tough few weeks of racing, and trying to get back up to where I should be has been hard. It is always hard overcoming tough and disappointing days of racing, but it is important to believe in yourself and not lose sight of your goals. I have managed to stay positive pretty much throughout, and this has definitely helped me.

The European Championships unfortunately did not go very well for me, as my legs were unresponsive and I struggled to get into a rhythm and hold wheels. I came away from this race disappointed, and then I had a few easy riding days in preparation for Thursdays race in Niel in the hope that my legs would come round. I knew that things would have to start to pick up at some point, as I have been training hard and putting in the work; you can’t do all of the above and not gain something from it.

I came in seventh, and I was very happy at the end. I rode strongly, and had a good feeling in the race. I was in contention with the top riders as well, so overall it was great. The conditions suited me well – I really like racing in the mud, so it was perfect!

I now look forward to my next race in Asper Gavere which is only 15minutes away from my Oudenaarde home. Saturday was a very busy day for me, it was an all-day filming with Trans World Sport. The film crew arrived at 10am, and after a quick chat the first shoot was set up, which was to focus on my Scott Addict cyclocross bike. Belle, the ‘ChainStay’ house cocker spaniel, was also featured, which she was very happy about as she loves being the center of attention as often as she can be – and especially if she can be rewarded with treats!

After a lunch break it was time for my interview piece, which was set up nicely in the bike room with some cool lighting. I was asked lots of questions about cyclocross, my background, training, diet and more. The guys from Trans World Sport were nice and easy going, so it was good working with them because they made me feel relaxed.

The next filming session was of myself, Gregg and Craig riding off-road at ‘The Donk,’ a lake and wooded park which has lots of little trails. Unfortunately it rained non-stop all day and did not ease up so we got very wet and muddy, but it made for some great film footage as we powered through puddles and boggy sections. It turned out to be rather fun even if I did get soaked!

We had to keep doing lots of repeats, but Gregg certainly made it very entertaining! The lake was very high due to the heavy rain and some of the paths were deep in water. I told Gregg it would be a good idea if he tried riding through the ‘puddle’ first. It turned out to be a very good idea as he sped through and it covered his axles and ankles! He also ploughed into a very deep section of clay mud and came to a complete stop. The bike stood up in the mud it was so deep!

On returning from the lake I was filmed washing my bike. Gregg was also interviewed, so it will be great coverage for The ChainStay. [Ed. note: the Chainstay, which sponsors Day, is a business that offers accommodations and support to racers looking to head over to Europe for competitions].

The final filming of the day was a shot of me working on my laptop on my web shop,  www.gabbydaycyclesport.com. The day ended at 5:30 and I felt really quite tired … it’s hard work being a film star for a day!

Thanks to Gayle from Seren PR for arranging the filming.

Next post Mann and Lopes Shine in the Sun at SCPS 10: Long Beach