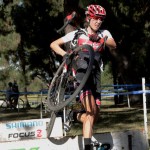 Under warm and sunny conditions, round 10 of the Southern California Prestige Series kicked off in Long Beach’s El Dorado Park. Well known in the local cycling community for hosting a weeknight practice criterium series, ElDo has turned into one of the best venues in SoCal for cyclocross. The expansive course incorporated several technical off-camber sections, a jungle-gym sand pit, a double barrier, stairs, and a two-foot-high pine tree trunk growing horizontally across the course (a.k.a. “the log”). Just to make sure the going wasn’t too easy, the local gopher population made sure that the course was nice and bumpy.

The Elite Women saw a small but quality field of the SCPS regulars line up. At the whistle, it was Christina Probert Turner (The TEAM) rocketing down the paved starting stretch getting a massive hole shot. Probert Turner kept on the gas until sliding out on a concrete-to-dirt corner just before the barriers. Allison Mann (Rock N Road), overcoming a poor start, had just caught up to Probert Turner when the latter hit the deck. Mann immediately capitalized on the mistake and opened up a gap that she would maintain throughout the race. Behind, Probert Turner held off a hard charging Dorothy Wong (The TEAM) to take second with series promoter and birthday girl Wong following up behind in third.

In the Elite Men’s field, Brian Lopes (Oakley) used his exceptional acceleration to take the hole shot followed closely by series leader Sid Taberlay (Sho-Air/Specialized) and Brent Prenzlow (Celo Pacific/B&L). In a well planned move, Gary Douville (Platinum Performance) made his way up to the front of the field the first half lap knowing he was one of the few riders who could clear the log without dismounting. Only Lopes and Taberlay were similarly able to bunny hop the obstacle which allowed the trio to create a small gap.

Prenzlow, who had won the Elite Masters race earlier in the afternoon, put in a major effort to chase down the leaders with Brandon Gritters (Rock N Road), Mark Noble (Metal Mtn), Jason Siegle (Bike Religion), and John Behrens (Bailey Bikes) in tow. On the second lap, Lopes, Taberlay, and Douville again created a split at the log with only Gritters mustering the effort to chase back on. Douville went to work on the front of the leading quartet, keeping the pace high. The chase was led by Siegle and Prenzlow with Noble and Behrens close behind.

The leaders stayed together until two laps to go when Lopes and Taberlay threw down the hammer, shelling Gritters. An untimely crash by Douville also took him out of contention. Just behind, Prenzlow pulled away from Siegle while Behrens dangled further back, not quite in contact. On the last lap, Lopes and Taberlay came into the finish straight together. Lopes then put on a sprinting clinic, putting in a super high RPM acceleration to open up a 10-length gap over the last 75 meters of bumpy pavement. Gritters followed up alone in third with Prenzlow overtaking Douville to take fourth and Siegle holding onto sixth just in front of Behrens.